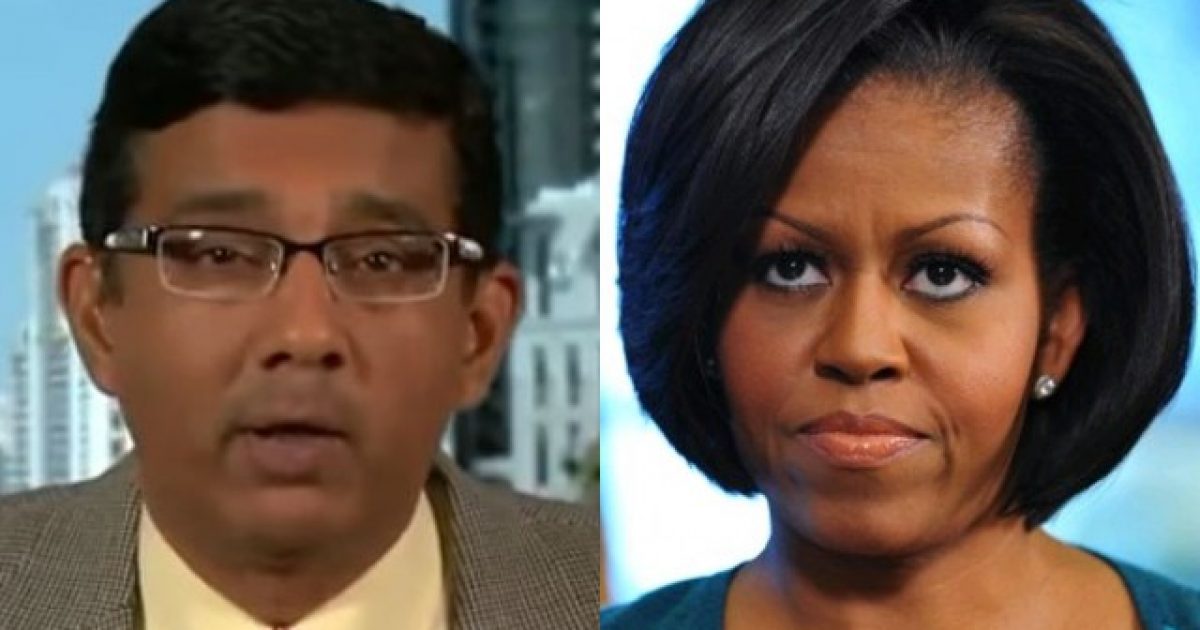 Opinion| It has been reported that conservative commentator, author, and filmmaker Dinesh D’Souza has called out former First Lady Michelle Obama, saying her final thesis from her time at Princeton University was “illiterate and incoherent.”

D’Souza’s comments came after the former First Lady made an appearance in London for a stop on her book tour for her new memoir, “Becoming,” which is currently the best-selling book of 2018.

Mrs. Obama was speaking with Nigerian author Chimamanda Ngozi Adichie when she made a ridiculous claim, saying that some of the most powerful people in our world are “not as smart” as they appear to be.

“I have been at probably every powerful table that you can think of,” she stated.

Mrs. Obama made the comment to a sold-out crowd of 2,000 people, admitting that she personally had “a little [bit of] impostor syndrome.”

D’Souza. who President Trump recently pardoned after being slapped with a felony conviction for “making illegal campaign contributions” back in 2012, was not happy about Obama’s comment that some of the most powerful people were “not that smart.”

“Anyone who has read Michelle’s college thesis—a document so illiterate and incoherent that it was written, as Christopher Hitchens put it, in ‘no known language’—will chuckle heartily at this one,” D’Souza wrote in a post on Facebook, linking to a Newsweek article which reported on the comment made by the former First Lady.

Michelle Obama’s college thesis was the topic of discussion during her husband’s 2008 presidential campaign, as Princeton University kept it under lock and key until the election was over.

A number of conservative bloggers wrote about the restriction, fueling controversy, until the Obama campaign itself sent Politico the thesis in full.

Princeton University then followed suit and lifted any restrictions to the thesis.

Hitchens, who was a frequent critic of Obama’s presidency before he died in 2011, was quick to tear into the thesis – which was titled ‘Princeton Educated Blacks and the Black Community’.

He mocked Michelle for what he said was a ‘narrow choice of subject’ because she was a ‘black woman at Princeton’.

Below are excerpts from Michelle Obama’s college thesis:

As a result of this greater sense of comfort felt by respondents with groups with whom they have spent more time, more respondents will be interested in benefiting these particular groups in comparison to others. Thus, the variable measuring time spent with Blacks or Whites will also influence the dependent variable measured by the respondents’ motivation to benefit various social groups.

For example, respondents who have spent time with Blacks are likely to be more comfortable with Blacks and will, therefore, take a great interest in benefiting this group in comparison to other social groups. Consequently, it also likely that these respondents are motivated to benefit self, their loved ones (who are also likely to be Black) and the Black community in comparison to other social groups indicated by this variable. While Blacks who are more comfortable with Whites than with Blacks will probably be less interested in benefiting the Black community. (Robinson, 19)

As we have seen, the findings discussed in the previous paragraphs seem to support the hypothesis that respondents who were increasing the time spent with Blacks were becoming more attached to the Black community during the Pre-to-Prin period both in their individual interactions and in their political ideologies about Black and White relations on a community level. Respondents who were increasing time spent with Blacks were also becoming interested in positively contributing to the Black community. (Robinson, 42)

However, with the increasing integration of Blacks into the mainstream society, many “integrated Blacks” have lost touch with the Black culture in their attempts to become adjusted and comfortable in their new culture — the White culture. Some of these Blacks are no longer able to enjoy the qualities which make Black culture so unique or are unable to openly share their culture with other Blacks because they have become so far removed from these experiences and, in some instances, ashamed of them as a result of their integration.  (Robinson, 54)
Seventy-one percent of the respondents reported being in careers that have made them upwardly mobile from their parents’ socio-economic class, while none of the respondents reported being downwardly mobile from their parents’ socioeconomic class , and only 17% of the respondents reported remaining even with their parents’ socio-economic class; 12% did not know yet how they were moving (see table 10).

After reading these excerpts, it would be difficult for someone to argue against D’Souza’s point.