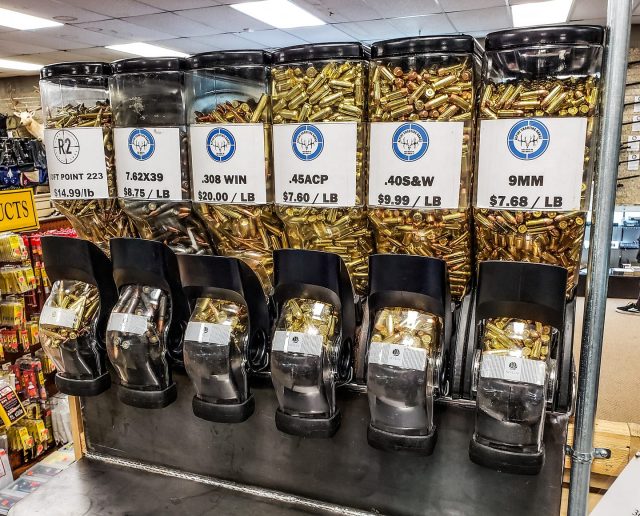 Leave it to gun enthusiasts to figure out how to get more business from national news controversies.

Now a gun range in Texas has gained similar attention because of Walmart.

TEXAS – A shooting range is mocking Walmarts position on banning ammo ban by offering bullets by the pound.

The pro gun store located in Fort Worth Texas started making a ammo bar at the beginning of September.

They started trolling Walmart by tagging them in all of their posts on the ammo bar set up.

The Alpine Shooting Range of Fort Worth, Texas, is now offering ammunition by the pound and has gotten in some good shots at Walmart for the retail giant’s recent surrender to anti-gun forces.

Alpine, a full-service gun store and range in business for 50 years, opened up a new ammo bar and trolled the mega-retailer on social media days after Walmart announced it was discontinuing the sale of ammunition for handguns and short barrel rifles. The move by the retail chain has been mocked and scorned by gun owners throughout the country.

“After selling through our current inventory commitments, we will discontinue sales of short-barrel rifle ammunition such as the .223 caliber and 5.56 caliber that, while commonly used in some hunting rifles, can also be used in large capacity clips on military-style weapons,” Walmart CEO McMillon said in a memo to employees.

He continued by saying that “these decisions will inconvenience some of our customers, and we hope they will understand.”

“Walmart doesn’t want to sell you handgun ammo,” the Alpine Shooting Range posted on Facebook on Sept. 4, “at Alpine we are selling it by the pound.”

The company began selling bullets by the pound in July, but business took off after it targeted Walmart on social media in early September. Alpine Shooting Range owner David Smith told TheBlaze that the response to the social media campaign had been “overwhelming and overwhelmingly positive.”

Smith said that in one instance, a customer had claimed to have visited the range with his family from more than 200 miles away after seeing one of these social media posts.

And NOTHING comes before the 2nd Amendment for True Conservatives:

Build it and they will come!