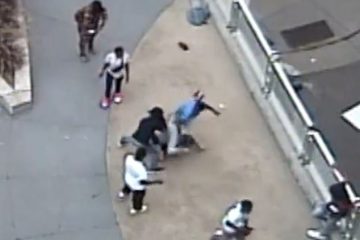 More than a dozen suspected gang members were arrested by police in Minneapolis, Minnesota after they were accused of preying on drunk people through violent attacks and robbing them of valuables.  yet, for the most part, the mainstream media has been silent.

Some of the individuals arrested are as young as 13-years-old.

This story comes by way of The Daily Mail.

One of the incidents took place on August 3 at the Target Field plaza and was captured on surveillance video.

The graphic recording shows a gaggle of about 12 teenagers and young men surround two men playing a game of dice on the sidewalk.

About 40 seconds into the video, Media Blackout – Minnesota: Gang Violently Beats Man During Robbery (Video)one of the ruffians appears to snatch a man’s cellphone. The victim shows resistance, prompting one of the attackers to throw the first punch.

From there, the violence quickly and dramatically escalates.

After going through his pockets, the perpetrators proceed to repeatedly punch the victim, kick him in the head and stomp on him.

While the man is lying supine on the ground, several of the assailants jump on him, and one of them body-slams the man.

The footage shows the attackers ripping the victim’s shoes and pants off, and trying to remove his boxer shorts.

The victim is seen in the video cowering and trying to protect his head with his hands from brutal blows raining down on him.

Towards the end of the footage, one of the most aggressive attackers, who is dressed in a light-blue shirt, hurls a potted plant at the victim, before another youth runs him over with a bicycle.

The video ends with the muggers walking away from the scene, leaving the victim standing in his underwear.

The ages of those arrested, which occurred after review of CCTV cameras were between 13-25.

Additionally, the Daily Mail also pointed out that another incident that occurred on August 17 involved a similar attack.

In another incident, on August 17, a man told police he was out with friends at a bar in downtown Minneapolis when he was robbed and assaulted. He claimed he didn’t remember much of the incident because he lost consciousness.

According to a criminal complaint, the victim said he was standing on a corner using his phone when a group surrounded him and tried to take his wallet. He said he lost his iPhone and his wallet, which contained his driver’s license, debit card, keys and $100 in cash. He also was notified by his bank that $220 was withdrawn at an ATM using his debit card.

After beating the thugs knocked the man unconscious, they fled, leaving him lying motionless on the ground, according to the complaint.

And self-absorbed politicians want you disarmed in the face of these criminals.  Does that make them complicit?