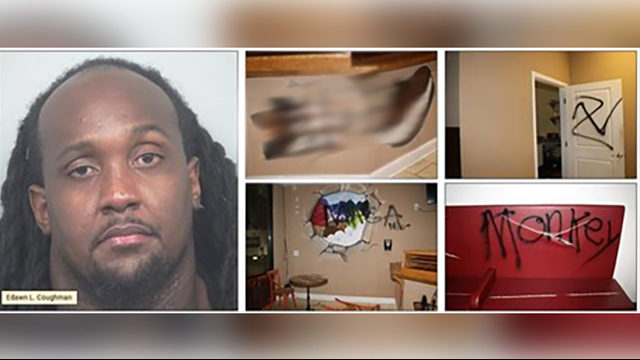 WSB-TV Atlanta is reporting that a former NFL player, Edawn Louis Coughman, stands accused of causing property damage at his own business and driving off with flat screen TVs to make it look like his business was both vandalized and burglarized.

A Gwinnett County business owner and former NFL player is facing criminal charges after destroying his business and writing racial slurs on the walls in an attempt to make it look like a burglary, police say.

Authorities said officers were called to the Create and Bake Restaurant and Coughman’s Creamery on Duluth Highway on Wednesday to a report of burglary in progress.

Officers later went into the business and found graffiti including “racially-motivated” words, swastikas and “MAGA” spray-painted on the walls, among other damage.

Channel 2’s Tyisha Fernandes was at the Create and Bake and Coughman’s Creamery Friday, where she could still see the vandalism through the window. Flat-screen televisions were ripped off the walls and offensive slurs were still spray-painted on the walls.

Pihera said a shopping plaza maintenance worker saw someone burglarizing the restaurant around 9:30 p.m. Wednesday and called police. Some officers were already in the area and spotted a black truck without a license plate on it.

Police pulled the truck over thinking it could be a possible burglary suspect. Coughman was driving.

“That’s when they asked him about it, and he said he’s the owner of the business,” Pihera said.

When police searched the back of Coughman’s truck, they found several flat-screen TVs that looked a little suspicious.

“The brackets were still attached and there was still drywall attached to the brackets, meaning, someone took them off very quickly,” Pihera said.

A former pro football player is facing charges after allegedly staging a burglary and vandalizing his business, according to Gwinnett County Police. Edawn Coughman, 31, was arrested September 12, 2019, and has been charged with filing a false police report and insurance fraud.

Gwinnett County Police was called to a burglary in progress at Create and Bake Restaurant and Coughman’s Creamery on Duluth Highway in Lawrenceville at approximately 9:30 p.m. on September 11. Inside the businesses that Coughman owned, walls were spray-painted with racial slurs, swastikas and “MAGA.” The spray paint was still wet.

Booths had been sliced open, mirrors were broken, wires were cut, and the surveillance system has been damaged. After getting a search warrant, officers found black spray paint and a yellow crowbar in Coughman’s truck.

So, in summary, Coughman faked a robbery, a hate crime and committed insurance fraud all on the same night if found guilty.

These types of crimes are out of control in America.

Not to be outdone, I have decided to go paint “Kill Whitey” all over my garage and steal everything inside, so I’m going to have to cut this short.