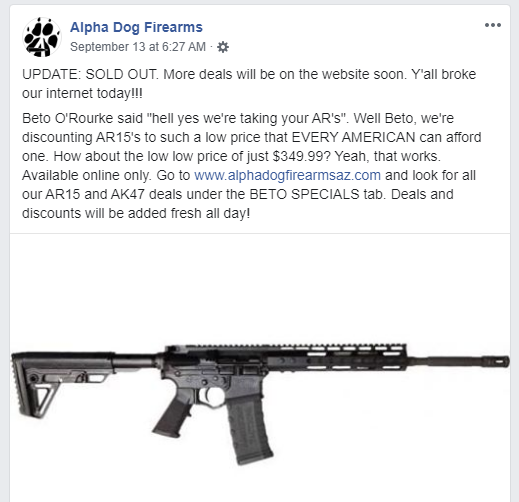 An Arizona gun store has sold out of AR-15 style rifles after offering a special sale to the public in response to Beto O’Rourke’s Orwellian gun confiscation “buyback” proposal.

From the looks of it, many patriotic Americans felt inclined to purchase new semiautomatic rifles during Alpha Dog Firearms’ sale. The store sold out of its inventory within 24 hours of announcing the sale, which listed AR-15’s at prices far below normal market price. Some AR platforms were sold for $350.00. The special began on Friday.

Alpha Dog is continuing to list special sales on their website under the ‘Beto Specials’ tab, and will restock with a new batch of rifles shortly. AK-47 rifles are also being sold at discount prices.

The gun-grabbing Texas Democrat will now have to confiscate every rifle sold in his name in order to enact his authoritarian program of mandatory rifle ‘buybacks.’ O’Rourke has no one to himself to blame, and stands poised to make himself the best de facto gun salesman for the firearm industry since Barack Obama himself.

Although he’s stirred up a strong reaction from gun owners and patriots in response to his nakedly Orwellian ‘buyback’ proposal, O’Rourke’s planned gun confiscation is little more than a last-ditch attempt to attract attention to a floundering campaign.