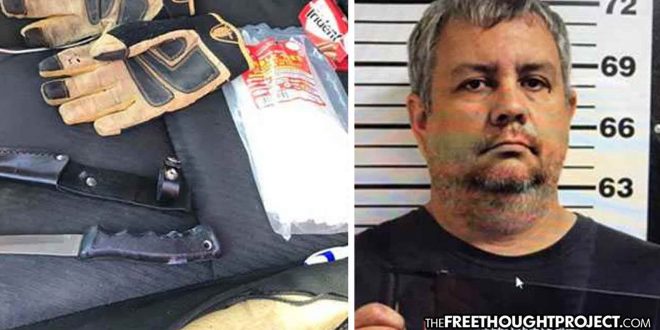 Canadian County, OK — On a near daily basis, police officers across the country are arrested for possessing child pornography or attempting to rape adults and children alike. These scenarios are by no means isolated incidents. Because so many of these cases take place, many of them fail to garner the attention that they should, despite being utterly horrifying. The following incident out of Oklahoma is one of those cases.

Pushmataha County Sheriff’s Deputy Cullen Jones was arrested in July while he was on his way to meet a young girl who he’d met on social media. During his arrest, police searched his vehicle and found multiple items he was likely going to use to savagely rape the child. Police found leather gloves, a knife, and zip ties which they say Jones would have most certainly have used based on the online conversations that took place.

Luckily, the young girl was not a young girl at all and was an undercover police officer as part of a child sex sting operation. Jones had driven two hours to go meet this girl who he thought was only 14-years-old.

During the conversations over social media, Jones told the girl he wanted to act out a “daddy-daughter” sexual relationship. According to authorities, the conversation quickly devolved into a sickening scenario, which is why they stated Jones would have likely used the knife and zip ties on the girl.

“During the conversation, it went downhill quick, talking about various sexual acts,” Capt. Adam Flowers, with the Canadian County Sheriff’s Office, said. “Things that go to 50 Shades of Gray-type, like bondage. You know it, he was wanting to do it.”

Thankfully, there was no girl and Jones was met by cops instead of a victim.

“I’m sure if you ask him, he would say, ‘I’m not going to use those zip ties on her,’” Canadian County Sheriff Chris West told News 4. “I would think that’s what, they don’t want to get in any more trouble than they are already in. It’s concerning to us.”

According to authorities, Jones was going to also film the child rape to likely distribute it later to fellow sickos online.

“He also wanted to film and video everything,” Capt. Flowers said. “He wanted to take photos and have me pose in different ways. He was very dominant in this type of conversation and the sexual acts he wanted.”

Rest assured that if Jones was willing to drive two hours to rape a 14-year-old girl that he has likely done this before. Who knows how long this man used his position in law enforcement to cover his tracks or abuse innocent children.

Online predators are an unfortunate reality in today’s technical age and as this case illustrates, those who claim to protect society from these predators all too often become the villains.

Just last month, TFTP reported on Richland County Sheriff’s Deputy Derek Vandenham. Vandenham is one of these cops who allegedly used his power to prey on a vulnerable children. This cop’s addiction to underage sex was so strong that he was caught on duty, in uniform attempting to meet a child for sex.

Vandenham was one of several people arrested last month in an undercover sting operation — which happened to be set up by his own department — to catch child predators. Deputies from the Richland County Sheriff’s office went undercover on social media and online chat rooms as children. They tricked predators into meeting up with them and would make the arrest when the predators showed up. Vandenham was one of these sickos who showed up.

Sheriff Leon Lott held no punches when calling out his deputy for his sick behavior, noting, Vandenham was “working, on duty, in my car, in my uniform … and was communicating to have sex with a 15-year-old.”

Before Vandenham, TFTP reported on a case out of Florida in which another cop was caught attempting to lure a real girl and there was no sting to catch him. Luckily, the girl’s mother was vigilant and caught this monster before he made physical contact with her young daughter.

As TFTP reported, an Okaloosa County sheriff’s deputy was fired and arrested after the mother of a 9-year-old girl caught him trying to lure her daughter to rape her. The cop, Cansas Sadler Jr., 41, is also a married father who has two daughters.

According to the Miami Herald, Okaloosa has him for two counts of using a computer to solicit a child and using a two-way communications device to facilitate a felony. Polk has him for multiple counts of transmission of material harmful to a minor by electronic device, according to deputies.

These cases and others like them should serve as a wake up call to parents who let their young children play unsupervised on electronic devices. This innocent 9-year-old girl was playing a simulation game called ‘the wolf,’ which she unsuspectingly thought was harmless. However, a child predator—who happened to be a cop—found her through it.