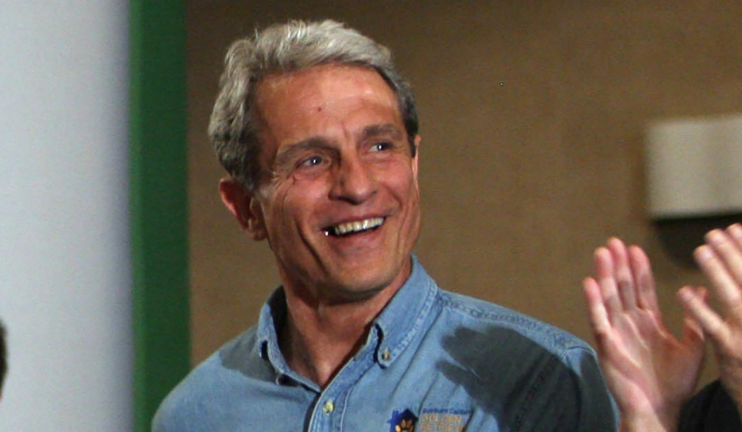 Prominent Democratic donor and LGBTQ political activist Ed Buck was arrested Tuesday and charged with operating a drug house, with prosecutors calling him a violent sexual predator who preys on men struggling with addiction and homelessness.

Buck was charged with one count each of battery causing serious injury, administering methamphetamine and maintaining a drug house, according to the Los Angeles County district attorney’s office. Buck is accused of injecting a 37-year-old man, who overdosed but survived, with methamphetamine on Sept. 11.

That latest incident comes after two men were found dead in his Laurel Avenue apartment in Hollywood. In both cases, African American men — Gemmel Moore, 26, and Timothy Dean, 55 — had overdosed on methamphetamine inside. After the first death in 2017, authorities said there was insufficient evidence to file charges.

“With this new evidence, I authorized the filing of criminal charges against Ed Buck,” Los Angeles County Dist. Atty. Jackie Lacey said in a statement, adding that she is deeply concerned for those whose life circumstances make them vulnerable to predators.

Prosecutors said Buck lures his victims into his home, baiting them with drugs, money and shelter.

“From his home, in a position of power, Buck manipulates his victims into participating in his sexual fetishes,” prosecutors wrote in court papers. “These fetishes include supplying and personally administering dangerously large doses of narcotics to his victims…. Not deterred by the senseless deaths of Moore and Dean, the defendant nearly killed a third victim last week.”

The latest victim, identified in court papers as Joe Doe, went to Buck’s apartment on Sept. 4, where Buck “personally and deliberately” administered a large dose of methamphetamine, prosecutors said. Concerned he was suffering an overdose, the man left the apartment to get medical help. He returned to Buck’s apartment on Sept. 11, when Buck again injected him with “two dangerously large” doses of methamphetamine, prosecutors said.

Prosecutors say Buck thwarted the man’s attempts to get help. The man eventually fled the apartment and called 911 from a gas station. He was taken to a hospital for treatment. Sheriff’s investigators found hundreds of photographs in Buck’s home of men in compromising positions.

“The full scope of his consistent malicious behavior is unknown,” prosecutors said. “It is only a matter of time before another one of these vulnerable young men dies of an overdose.”

Buck is due in court Wednesday for his arraignment. Prosecutors are asking that his bail be set at $4 million. If convicted as charged, he faces up to five years and eight months in state prison.

In January, after Dean was found dead, the Los Angeles County Sheriff’s Department said it would take another look at the first case. The deaths sparked protests from activists who complained authorities are not doing enough.

Los Angeles County coroner’s officials had concluded that Moore died from an accidental methamphetamine overdose in Buck’s apartment, which was littered with drug paraphernalia, including 24 hypodermic needles and five glass pipes, as well as sex toys. Paramedics found Moore naked on a mattress in the living room, the coroner’s report said.

They ruled Moore’s death an accident, and an initial review by sheriff’s deputies found nothing suspicious. But in August 2017, homicide detectives launched a new investigation after Moore’s mother and friends questioned whether the drugs that killed him were self-administered.

A notebook found in Moore’s possession indicated he used drugs with someone whose name is redacted in the coroner’s report. The LA Times has reviewed pages of that journal, in which Moore purportedly wrote about using crystal methamphetamine.

“Ed Buck is the one to thank,” Moore appears to have written. “He gave me my first injection of chrystal [sic] meth.”

Moore’s mother, LaTisha Nixon of Texas, has questioned whether Buck’s ties to elected officials and differences in race and class influenced the investigation. Buck, who is 65 and white, is a longtime political donor, onetime West Hollywood City Council candidate and a well-known figure in LGBTQ political circles. Moore had been homeless and had worked as an escort.