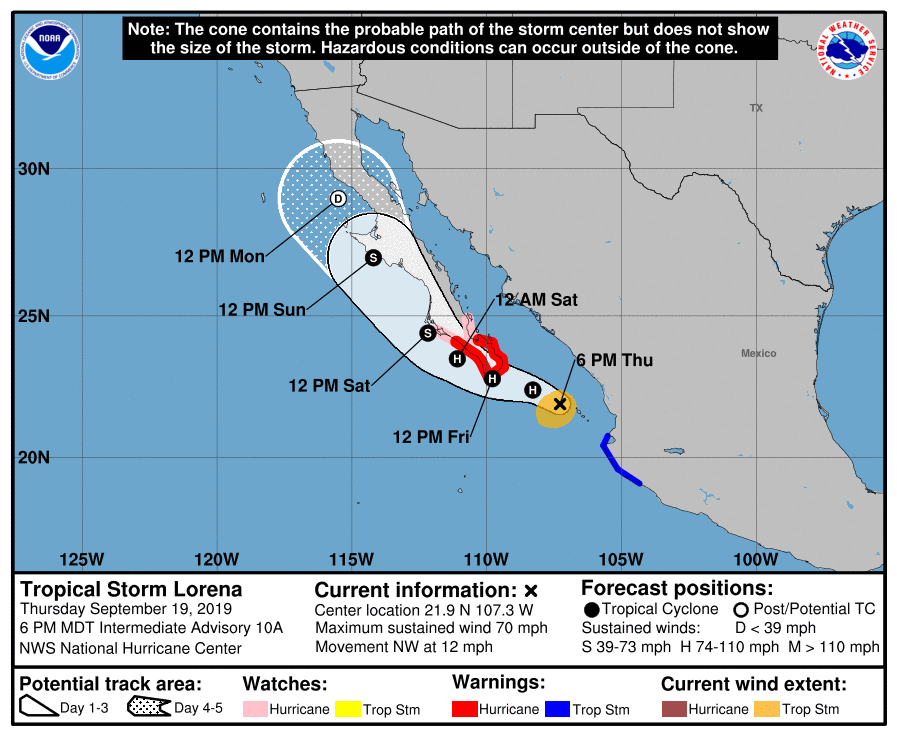 In the entire history of our country, a hurricane has never made landfall in the state of California.  So if such a thing actually happened, it would be considered to be an extremely unusual event.  Well, right now there are three very dangerous tropical storms swirling in the eastern Pacific Ocean.  Tropical Storm Kiko is not expected to be a serious threat to make landfall, but Tropical Storm Lorena and Tropical Storm Mario “are expected to become hurricanes by Friday as they approach the Mexican coast”.  Tropical Storm Lorena is the more immediate threat, and the latest forecast is projecting that it will reach Mexico’s Baja California Peninsula by Saturday.  If it maintains hurricane strength and continues to ride up the west coast, it is entirely possible that we could see something that we have never seen before.  Most forecasters don’t want to talk too much about it yet, because it truly would be an unprecedented event, but there really is a chance that California could get hit by a hurricane for the very first time in U.S. history.

Let’s back up a bit and take a look at the bigger picture.  According to USA Today, a record-tying six named storms are being tracked by meteorologists right now, and three of those are in the eastern Pacific…

Sure, it’s the middle of hurricane season. But this is ridiculous.

The six named storms whirling at once this week in the Atlantic and Pacific set a record, forecasters reported.

Tropical Storm Lorena is expected to become a hurricane shortly, and according to the Weather Channel hurricane warnings have already been issued for much of the Baja California Peninsula…

A hurricane warning has been posted on the Baja California Peninsula from La Paz to Santa Fe, Mexico. This means hurricane-force winds (74-plus mph) are expected somewhere within the warning area – in this case, within the next 24 hours. Preparations to protect life and property should be rushed to completion.

The projected track of the storm will take it very close to southern California, but that does not necessarily mean that it will make landfall.  So many things could still happen, and as we have seen in recent weeks, forecasting the behavior of hurricanes is not an exact science.

But if Lorena or Mario does make landfall along the California coastline, it will truly be a historic event.  According to NASA, there has never been a documented case of a hurricane making landfall in the state…

While there has never been a documented case of a hurricane making landfall in California, the Golden State has had its share of run-ins and close calls with tropical cyclones. In fact, California has been affected by at least a few tropical cyclones in every decade since 1900. Over that timeframe, three of those storms brought gale-force winds to California: an unnamed California tropical storm in 1939, Kathleen in 1976 and Nora in 1997. But the primary threat from California tropical cyclones isn’t winds or storm surge. It’s rainfall — sometimes torrential — which has led to flooding, damage and, occasionally, casualties.

So we are talking about something that would be considered to be an extremely strange event.

The primary reason why hurricanes usually never make landfall in California is because the water off of the California coast is usually quite cold.  The following comes from Wikipedia…

Tropical cyclones usually require very warm water to depth, generally above 26.5 °C (80 °F) extending to a depth of 50 meters (160 ft).[1] However, the waters off California are cold even in summer. They rarely rise above 24 °C (75 °F) in near-shore southern California,[2] and usually remain below 17 °C (63 °F) along most of the rest of the coast and outer coastal waters, although El Niño events may warm the waters somewhat. This is due primarily to the extensive upwelling of colder sub-surface waters caused by the prevailing northwesterly winds acting through the Ekman Effect. The winds drive surface water to the right of the wind flow, that is offshore, which draws water up from below to replace it. The upwelling further cools the already cool California Current which runs north to south along coastal California and even much of coastal Baja California.

But right now a “strange anomaly” has caused water temperatures in the region to heat up dramatically.  The following comes from an article that I published earlier this month…

It is being called “the Pacific marine heatwave of 2019”, and officials are warning that it could have very frightening implications if it does not dissipate soon. Right now, there is a vast expanse of water stretching from northern Alaska all the way to southern California where the water temperatures have rapidly risen to very dangerous levels. In fact, in some spots the water temperature is already “as much as 6 degrees Fahrenheit above normal”, and there is a tremendous amount of concern about what will happen if the water continues to become even warmer. At this point things are already so bad that we are being warned that this strange anomaly could “ravage marine life and decimate commercial fishing” all along the west coast.

This means that conditions along the west coast of the United States are now quite favorable for major storms, and it makes it much less likely that Lorena and Mario will quickly fizzle out once they track farther north.

And if either Lorena or Mario does make landfall in California, many will consider that to be a really, really troubling sign.

Let’s review what we know at this hour.

And we also know that water temperatures along the California coast are much, much higher than normal right now, thus creating exceedingly favorable conditions for storms such as Lorena and Mario.

That doesn’t mean that either of them will make landfall in California, but it does mean that we should be watching these storms very carefully over the next several days.