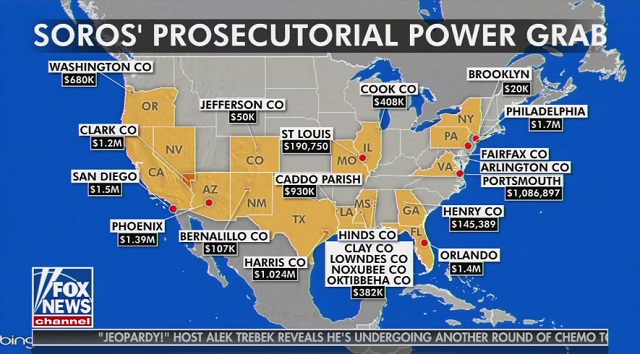 CARLSON: One of the left’s big causes in the past several years has been so-called Criminal Justice Reform. What does that mean exactly? It sounds like something you’d be for.

Over the past few years, left-wing billionaire George Soros has spent about $13.4 million on District Attorney races across the country in 17 states. He spent that money because it’s an effective use of money.

Without passing a single law, without the democratic process really working itself out, a single DA can completely remake or unmake a city’s Criminal Justice System. It’s happened across the country.

One of the Soro’s biggest wins in recent years was the election of Larry Krasner as the District Attorney in Philadelphia. So we went to Philadelphia to investigate the effect of crashers win on the city and this is what we found.

CARLSON (voice over): This is the scene outside of the Philadelphia Cycle Center last winter. In broad daylight, 10 kids congregate outside of the store, and they climb up the back wall, smash the windows, dive into the building and come out with a $10,000.00 dirt bike.

QUESTION: And how much time do they get for that?

CARLSON (voice over): The victim, Vince Sanginiti lost thousands of dollars in stolen merchandise and even more in damage to his store. The burglar who rode off with the dirt bike was arrested, but Sanginiti didn’t get justice.

Prosecutors went soft on the burglar. He didn’t go to prison.

CARLSON (voice over): That’s life in Philadelphia under the city’s new prosecutor, Larry Krasner. Krasner is a left-wing activist who uses his position to undermine the existing legal system.

BILL MCSWAIN, U.S. ATTORNEY FOR EASTERN DISTRICT PHILADELPHIA: He views the system as corrupt and racist. And so his revenge on the system is that he is going to excuse lawlessness of all types.

CARLSON (voice over): Soon after taking office, Krasner issued a memo to his staff urging them not to enforce certain drug or prostitution laws and to defer gun cases. Even petty theft has almost been decriminalized.

The consequences of all of these, well, see for yourself. This footage of Philadelphia’s Kensington neighborhood shows an open air heroin market filled with drug dealers and addicts shooting up in public. The sidewalks are covered in trash.

This photo shows a pile of us syringes just blocks from a city school. Krasner refused to comment on any of these policies. He rejected our offer for an interview. But publicly, he suggests that his approach allows his office to devote its limited resources to the most serious crimes such as rape and murder.

MCSWAIN: The only thing he is prioritizing is lawlessness at all levels.

CARLSON (voice over): In fact, crime is surging in Philadelphia. In Krasner’s first year as prosecutor, the homicide rate in the city rose 12 percent and reach levels not seen in more than a decade.

Jervazz Ballard is one of those victims.

CARLSON (voice over): It was an easy case for prosecutors. The murder was caught on surveillance tape and the killer confessed.

BALLARD: The shooter stuck the gun in the car and shot my son once in the back of his head. If you can’t tell me that’s not premeditated, I don’t know what — you know, I don’t know what else to say about that. That was whole blood chilling. They set my son up on video.

CARLSON (voice over): Despite having a confession, Krasner downgraded his sins to third degree murder. That’s a charge usually reserved only for unintentional killings.

Instead of getting locked life in prison, his son’s murderer faces a minimum of just 17 years behind bars.

CARLSON: We’re sad to tell you that the story you just heard, Jervazz Ballard’s story is not unique at all. District Attorney Krasner has introduced charges for several other murder cases since taking office.

Meanwhile, Democrats in Congress have been pushing hard for a National Red Flag Law that would allow police to seize firearms from individuals who have not even been charged with a crime, much less convicted of one.

It’s not a good idea. But if you’re going to pass a law like that, you might want to apply it to say, gang members who are responsible for the overwhelming majority of gun murders in this country. But they don’t want that.

Congressman Ken Buck is a Republican from Colorado. He introduced an amendment that would apply a Red Flag to those gang members on databases, but the Democrats voted it down. Interesting.