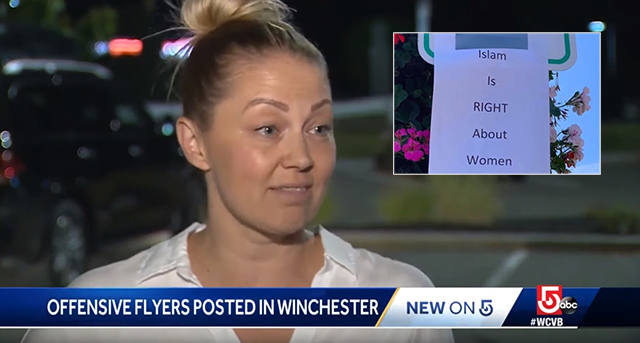 Women in liberal Massachusetts were unsure what to think after signs were put up around the town of Winchester stating, “Islam Is RIGHT About Women.”

“It was just upsetting, I just didn’t like it, it just wasn’t necessary to be up and out in the streets,” said Anita Davison, who ripped down the signs and took the story straight to social media.

“It’s either about women, it’s either about Islam, it’s about both, I’m not really sure what point they were trying to make — either way it was just, it was terrible,” Davison said.

Other women were similarly baffled, as Boston 25 News reports:

“I assume it’s negative,” said Dorothy Kruger, a resident. “That’s not cool, that’s not a cool thing to do.”

[…] “I think somebody just wanted this to happen right?” said Stacey Irizarry. “To get some kind of response. The sign itself is confusing it is subject to interpretation.”

While many say they are offended and bothered by the signs, others say they don’t really know how to feel about them since the signs don’t make a lot of sense.

“I really don’t know because everybody has their own opinion and I respect it,” said Syeda Tahsina Mahmud, who is Muslim. “Everybody’s entitled to say whatever they want.”

“What is the intent behind it and what are we trying to prove by putting it on this pole so ambiguously,” said Shakeelur Rahman, the Imam of the Islamic Center of Burlington. “There is not a lot of clarity in it. I hope the person was trying to encourage people to look it up maybe or research it.”

They seem to want to be outraged because Islam subjugates women but they also don’t want to be viewed as “racist,” “xenophobic” or “intolerant.”

Islam
Is
RIGHT
About
Women

then you are guilty of hate speech. On the other hand, if you say

Islam
Is
WRONG
About
Women

then you are guilty of hate speech.

I suspect we’re going to see a lot more of these signs in the future with similarly hilarious results!