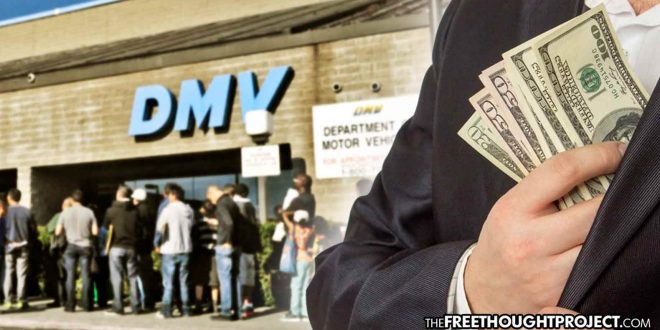 Anyone who has ever had to stand in a long line to pay the state for the privilege of renewing your driver’s license knows how infuriating that experience can be. The bureaucratic high-horse mentality of many of the DMV workers is so brazen and overt that DMVs have earned a notoriously horrid reputation in every state. But more infuriating than long lines and power-tripping bureaucrats, however, it the fact that according to a new report, these power-tripping bureaucrats are selling your data to private entities.

And they are making millions doing it.

According to a scathing report from Motherboard, government-run motor vehicle departments across the country are taking your personal information—entrusted solely to them by you—and selling it to the highest bidder. These sales are netting DMVs across the county millions in profits.

Ever wonder where all these spam calls for credit cards and vehicle warranties come from? Well now you have likely found the culprit, and it’s the government.

While it is understood that DMVs can sell information for legitimate purposes to insurance companies, many of these sales were to nefarious entities, according to the report.

When most people go to the DMV, they most likely think that their information is safe. However, according to the report, which was comprised of multiple public records requests, after you give your personal information to the DMV, they turn around and sell it to almost anyone who asks.

This extremely personal information is easily obtained by private investigators, credit agencies, and data leeching companies like LexisNexis. According to its website, LexisNexis sells dozens of various reports to anyone who wants it, all of which contain information on you.

Integrity Investigations advertises to its customers that they are able to obtain this data to aid them in the surveillance of spouses or significant others to attempt to catch them cheating. While this may seem benign, this information could be sold to people who’ve fled abusive relationships and this is the only way to keep their whereabouts secret.

“The selling of personally identifying information to third parties is broadly a privacy issue for all and specifically a safety issue for survivors of abuse, including domestic violence, sexual assault, stalking, and trafficking,” Erica Olsen, director of Safety Net at the National Network to End Domestic Violence, told Motherboard in an email. “For survivors, their safety may depend on their ability to keep this type of information private.”

While many will find this information infuriating, everything these DMVs are doing is entirely legal and falls under the ironically titled law, the Driver’s Privacy Protection Act (DPPA) of 1994. As Motherboard points out, the DPPA was created in 1994 after a private investigator, hired by a stalker, obtained the address of actress Rebecca Schaeffer from a DMV. The stalker went on to murder Schaeffer. The purpose of the law was to restrict access to DMV data, but it included a wide range of exemptions, including for the sale to private investigators.

“The DPPA is one of several federal laws that should now be updated,” Marc Rotenberg, president and executive director of privacy activism group EPIC, wrote in an email to Vice. “I would certainly reduce the number of loopholes,” he added, referring to how the law might be changed.

When the government, who pretends to protect consumers and citizens by going after those who steal and abuse our data, gets in bed with these very same people, something has gone serious wrong—or right, if you are the state.

What this case illustrates is that nothing is sacred when it comes to government. These institutions all claim to exist to protect our privacy and our data while at the same time selling us out at the drop of a hat. Land of the free? More like land of the exploited tax cattle whose existence is but a battery in the machine of tyranny and technocracy.