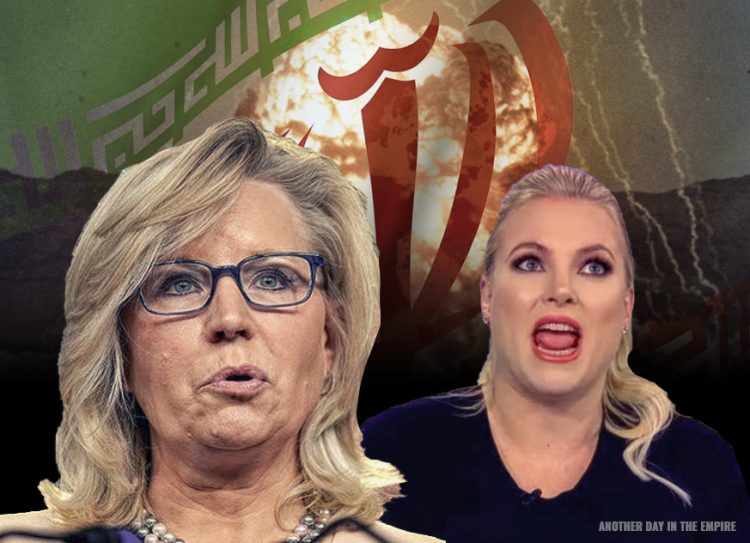 It is rather bizarre Liz Cheney, the daughter of Dick Cheney, would cofound Keep America Safe (now defunct) with a neocon talking head, Bill Kristol. The forever war outfit was funded by Mel Sembler, an Israel-first real estate tycoon who is a good friend of Bibi Netanyahu.

Cheney has absolutely no interest in keeping America safe. She is calling for an immediate attack on Iran.

House Republican Conference Chairwoman Liz Cheney (R-Wyo.) said on Wednesday the U.S. should consider a “proportional military response” against Iran, among other potential actions, over its suspected involvement in drone attacks on Saudi Arabia’s oil supply.

A million or more dead? Not a problem. For the neocons, would be worth it, same as it was for Madeline Albright, the former Clinton secretary of state who declared on national television the murder of half a million kids in Iraq was worth it.

“Not acting sends a message, frankly, that’s likely to encourage an additional escalation by the Iranians if they feel they can take this kind of action without a response. So I’m pleased to see that we’ve begun to see some of that response,” Cheney said.

“I also think that a proportional military response is the right way to go, and I’m hopeful that Secretary Pompeo is coordinating in that regard with the Saudis,” she added, referring to Secretary of State Mike Pompeo.

This supposed proportionality would result in a devastating war in the Middle East, the shutdown of oil in the Persian Gulf, and would precipitate a crash of the world economy. It certainly wouldn’t keep America safe. It would do the opposite.

Neocons are not concerned with ordinary Americans teetering on the edge of economic disaster. Neocons have two primary concerns: 1) making Zionist Israel the undisputed hegemon of the Middle East, and 2) maintaining American exceptionalism, that is to say maintaining the ability to destroy nations not following the neoliberal game plan.

Next, we have Meghan McCain, daughter of the late Senator John McCain. From her soapbox at the three-ring circus known as The View, Ms. McCain argued with Whoopi Goldberg about the advisability of bombing Iran.

During the tête-à-tête between Goldberg and McCain, Meghan “claimed that the U.S. sent $400 million to the ‘largest state sponsor of terror,’ adding, ‘I don’t care who you are but we shouldn’t be giving money to a country where people go out in the streets and scream death to Israel, death to America,’” Splinter reported last May.

Not mentioned is the fact the US government stole the money from Iran. Even TIME admitted the money was stolen.

[In] the late 1970s… [Iran] had paid for U.S. fighter jets, while Tehran was still a U.S. ally. After it turned into an enemy in 1979, Washington was not about to deliver the jets. But, all these years later, Iran wanted its money back—and with interest.

And yet, neocons like McCain continue to push out the lie that Obama gifted the Iranians “$400 million stacked on pallets.”

this video here features meghan mccain screaming – literally throwing a tantrum – about how iran is scary, how the iran deal was really, really scary; how iranians hate america & how she doesn't believe in diplomacy with iran.

she makes joy and whoopi look like radical leftists. pic.twitter.com/4AzQlzd9ab

McCain is woefully misinformed about nukes in the Middle East. There is but one nuclear power in the neighborhood, and that’s Israel with its undeclared nukes. In 1965, the Zionist state stole over 200 pounds of weapons-grade highly enriched uranium from the Nuclear Materials and Equipment Corporation plant in Apollo, Pennsylvania. There was zero consequence for this brazen act.

More than a decade ago, McCain said she agreed with everything her father had to say about Iran.

Following the unlikely takedown of the mullahs, the late senator wanted a former Marxist cult leader to lord over the country. In the photo below, McCain is standing with Maryam Rajavi, the leader of a terrorist organization that has killed Americans.

John McCain, who stood by them all the way.
The Iranian people and resistance send their condolences to family and friends of Sen. @cindymccain @MeghanMcCain #JohnMcCain#FreeIran2018#Iran pic.twitter.com/kFXFmY2wxf

Both Meghan McCain and Liz Cheney are a sideshow attraction—billed as the Daughters of Creative Destruction—a minor distraction on the path to a larger and far more destructive war than what Dick Cheney’s neocons inflicted on Iraq.

However, it appears this war will be postponed until after the election. Iran may or may not have targeted Saudi oil. This single event—and that of taking out an expensive US spy drone—are not enough to get a war going and the neocons know it. Israel and the neocons want Iran destroyed now and they may cook up another false flag to get their war going.

If Trump falls, as a result, that’s not a serious concern.