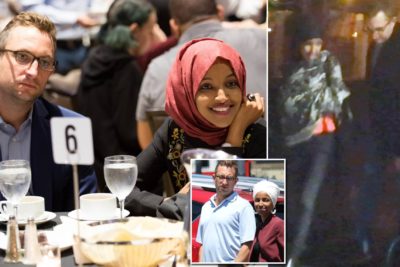 Editor’s Note:  Here’s a woman in violation of virtually every single command in the Ten Commandments, which God gave, and yet, she pontificates on telling people what God expects of them concerning voting?  This woman is a devil.

Now the devil claims to speak for God.

Remember when it was supposed to be the Republicans forcing religion on you?

Democratic presidential candidate and South Bend, Indiana, Mayor Pete Buttigieg has long used the line “God does not have a political party.” However, in May, he said religion shouldn’t be wielded as “a kind of cudgel as if God belonged to a political party, and if he did, I can’t imagine it would be the one that sent the current president into the White House.”

And now we have Rep. Ilhan Omar, our favorite Minnesota Democrat. Yes, she may be of a different religion than Mayor Pete — Omar is Muslim — but she still thinks God “expects” you to vote a certain way.

You can probably guess which way it is.

Speaking at a “Plight of Black Immigrants” forum Friday at the Congressional Black Caucus’ annual Legislative Conference in the nation’s capital, Omar talked about the importance of “getting off the sidelines.”

“God does not expect you to vote for people who will ultimately hurt you and other humans around you,” Omar said, according to The Washington Free Beacon.

“I beg of you, to really think about what is your role as a member of our community, our society, our country, our world to dealing with some of these policy challenges,” Omar said.

“AND, YES, GOD HAS OBLIGATIONS TO ALL OF US, BUT GOD EXPECTS US TO DO THE RIGHTEOUS WORK.”

This is almost certainly not the person to be invoking God in this context.

Let’s go with Omar’s history. She’s been reprimanded (albeit preposterously lightly) by the House of Representatives after a string of incidents where she rather blatantly repeated anti-Semitic tropes in speeches or in tweets.

She’s a supporter of the anti-Semitic Boycott, Divestment, Sanctions movement, something she just came out in favor of again this weekend.

“I think what is really important is for people to understand that you have to give people the opportunity to seek the kind of justice they want in a peaceful way,” Omar said on CBS’ “Face the Nation.”

“And I think the opportunity to boycott, divest, sanction is the kind of pressure that leads to that peaceful process.”

Oh, and by the way, that also proved yet again that she’s a liar: During the campaign, she made it clear to voters that she didn’t support BDS.

And then there’s her party, which has determined that Roe v. Wade must be protected at all costs, even if it means removing all roadblocks to third-trimester abortions.

Just don’t try to use your Second Amendment rights, those are evil.

This was obviously nothing more than an attempt to appeal to the pious in the crowd — and the condescending nature of it should make conservatives sick.

Apparently, however, the media chose to ignore the comments, instead focusing on the fact that both Omar and fellow “squad” member Rep. Ayanna Pressley of Massachusetts (the Ringo Starr of the group, as is frequently noted) were caught on camera dancing to Lizzo’s hit “Truth Hurts.”

The idea that the Democrats can lay claim to the mantle of a godly endorsement because “God does not expect you to vote for people who will ultimately hurt you and other humans around you” is laughable when you consider the kind of harm Omar and others in her party are doing.

I’m perfectly willing to abide by Mayor Pete’s original axiom that the Deity doesn’t personally favor either party, if just for the sake of comity.

If they want to start talking about His endorsement, however, conservatives should beg to differ in the strongest possible terms.