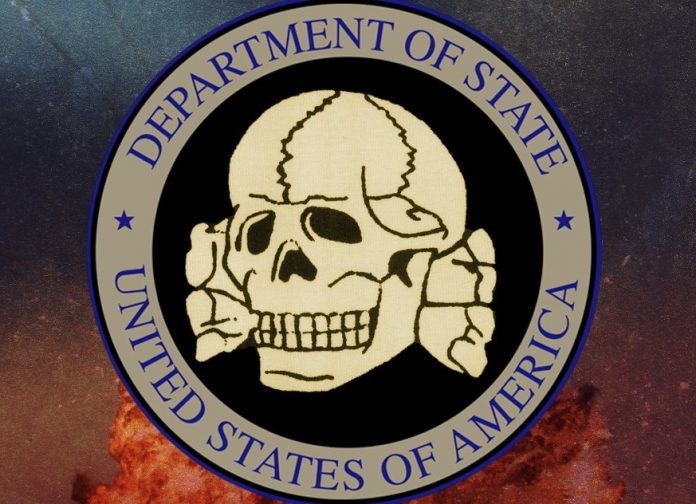 The State Department—under the leadership of the Zionist fellow traveler, former CIA boss and tank commander Mike Pompeo—has tweeted out the following propaganda produced with your tax dollars (or debt spending that will be passed on to your children).

The Iranian regime is the most destabilizing force in the Middle East and the world’s top sponsor of terrorism. That’s why the U.S. launched a campaign of maximum pressure. It’s producing maximum results. pic.twitter.com/asht69DikZ

This Big Lie production about Iran’s alleged malevolence toward its neighbors has dramatic music and graphics to support an obvious falsehood—Iran is the number one terror state in the world.

In fact, that designation is reserved for the United States government and its junior partner, Israel.

History is replete with examples—from both world wars to dozens of imperialist ignited brush fires including Vietnam and Iraq. As for Israel, it has been at war with its Arab neighbors for well over 70 years.

The State Department is the grand choreographer of conflict and murder in the name of a corporatist and bankster neoliberal order now crumbling. It is the largest and worst terrorist on the planet. Most recently, it installed Nazi throwbacks in Ukraine, reduced Libya to a failed state, and armed Wahhabi fanatics in Syria.

The above video is essentially an advertisement for the cruel torture of the Iranian people through economic warfare in addition to the US-Israel assassination of scientists, malware attacks on Iranian infrastructure, and various terror attacks, including the 2017 attack on the Iranian parliament.

This latter incident was blamed on the Islamic State, a Pentagon fabricated terror group. If you believe a genuine Islamic (Sunni-Wahhabi) terror group was responsible for this attack and a simultaneous one on the Mausoleum of Ruhollah Khomeini, you may be interested in a bridge for sale in Brooklyn.

According to a Reuters report today, the sanctions imposed on Iran are resulting in the country having problems buying rice, cooking oil and other staples to feed its 74 million people.

It is not simply oil the sanctions target, but all kinds of imports, according to commodities traders…

Before long they will engage in even more barbarous war crimes after Israel bombs Iran’s suspected nuclear sites and the United States follows up with a general bombardment of the country’s civilian infrastructure not dissimilar from the bombardment of Iraq and Yugoslavia, both Nuremberg level war crimes.

Since that time, the situation has grown far worse for ordinary Iranians.

In 2014, Israel and the US didn’t bomb “suspected nuclear sites” in Iran, mostly because Obama, while carrying out the globalist agenda in Democrat fashion, stepped back from annihilating the country at the pestering insistence of Bibi Netanyahu.

That wasn’t the case with Libya. It didn’t have the ability to fight back, not like Iran, which does.

John Bolton tried to get a bombing raid going but failed due to Trump’s fear an invasion—which would turn into a large regional conflict—will ruin his chance at re-election. Trump the Schizoid Man flits back forth between violent rhetoric aimed at Iran (and Venezuela, Cuba, North Korea, Syria) and saying we don’t need another expensive war in the Middle East.

Donald Trump is a miracle—on one hand, a proclaimed noninterventionist and MAGA poster boy, and on the other, a neocon enraptured with the apartheid regime in Israel. His personality disorder is on display 24/7. After showing Bolton the door, he hired a more acceptable and less abrasive neocon to be his national security adviser.

The latest kerfuffle in Saudi Arabia has resulted in Trump pumping troops into that medieval nation, a message to Iran it will not be permitted to resist and respond to the economic destruction.

I initially figured the attack on Saudi oil facilities was a false flag to get a war going. I now believe Iran is responsible for the attack. It warned months ago that the embargo of its oil will result in the Wahhabi emirates suffering a likewise fate. Iran is living up to that threat and responding in kind.

For the indispensable ruling elite, self-defense is impermissible, lest you desire mountains of rotting dead bodies, typhus, cholera, cancer from depleted uranium and other military toxins, malnutrition, and endless sectarian conflict to keep the vassals from going after the real culprits. Syria, Libya, and Yemen are only the latest examples.

Iran has the ability to resist this neoliberal death-head onslaught. It was decided that war and its horrific consequence is far more honorable than the humiliation of starvation and disease, which is the ultimate message of the State Department’s absurd propaganda video.