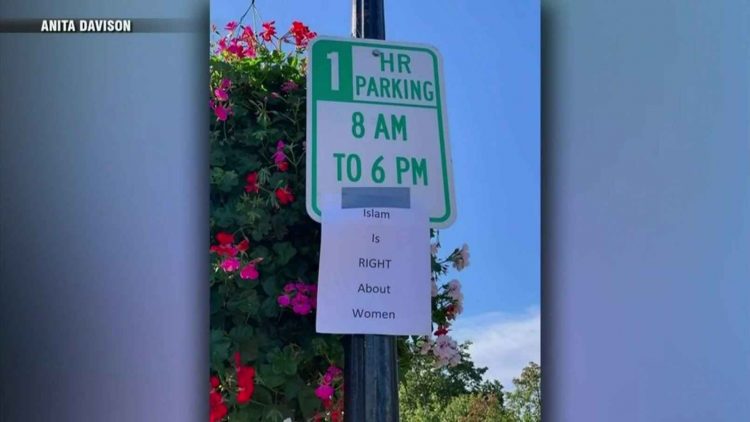 A curious incident recently unfolded in the sleepy hamlet of Winchester, Massachusetts. According to WHDH Thursday, “residents in Winchester are debating free speech versus hate speech after flyers reading ‘Islam is RIGHT About Women’ were found plastered around town.”

Winchester resident Anita Davison says she was “alarmed” at the sight of flyers proclaiming “Islam is RIGHT About Women,” which were plastered on street signs around town.

Davison commented: “Political climate at the moment, and all the things happening around the world, it just puts a little fear in you.”

“Fear”? That’s odd enough. Even stranger is what happened next. Davison went to the Winchester Police Department to alert them to the flyers. The cops took them down. Davison said defensively: “Most people have been supportive of the decision to take them down. Others have said that I’m not for free speech but I really am. I just feel like that was on the side of hate speech.”

“Hate speech”? Davison has the concept all wrong. The flyers would have been “hate speech” if they had said, “Islam is WRONG about women.” In the view of the dominant Left today, that would be hate speech. But defending Sharia oppression of women? Why, that’s not “hate speech”! That’s positively woke!

This incident illustrates the fact that the very concept of “hate speech,” so beloved and increasingly used by the Left, is actually impossibly undefinable and elastic. How is the flyer in Winchester “hate speech” in any conceivable fashion? If an adherent of Islam put it up, he or she would strenuously object to that label, and maintain that Islam’s treatment of women was divinely-ordained justice. So if this is “hate speech,” then Islam is hateful, which I’m sure neither Anita Davison nor anyone else in Winchester, Massachusetts meant to imply.

Or are the good citizens of Winchester afraid that the signs were put up by “Islamophobes”? If so, it’s an odd sort of “hate speech” to affirm what one opposes. But since clear thinking has pretty much gone the way of the Model T Ford and sensible Leftists these days, fear of “Islamophobia” may indeed be what led the Winchester police to take down the signs.

Lost in the controversy is what is actually the central question: is Islam actually right about women?

The Qur’an teaches that men are superior to women and should beat those from whom they “fear disobedience”: “Men have authority over women because Allah has made the one superior to the other, and because they spend their wealth to maintain them. Good women are obedient. They guard their unseen parts because Allah has guarded them. As for those from whom you fear disobedience, admonish them and send them to beds apart and beat them.” (4:34)

It declares that a woman’s testimony is worth half that of a man: “Get two witnesses, out of your own men, and if there are not two men, then a man and two women, such as you choose, for witnesses, so that if one of them errs, the other can remind her” (2:282)

It allows men to marry up to four wives, and have sex with slave girls also: “If you fear that you shall not be able to deal justly with the orphans, marry women of your choice, two or three or four; but if you fear that ye shall not be able to deal justly, then only one, or one that your right hands possess, that will be more suitable, to prevent you from doing injustice” (4:3)

It rules that a son’s inheritance should be twice the size of that of a daughter: “Allah directs you as regards your children’s inheritance: to the male, a portion equal to that of two females” (4:11)

It allows for marriage to pre-pubescent girls, stipulating that Islamic divorce procedures “shall apply to those who have not yet menstruated” (65:4)

Also, a Muslim wife may not refuse sex. A hadith depicts Muhammad saying: “If a husband calls his wife to his bed [i.e. to have sexual relation] and she refuses and causes him to sleep in anger, the angels will curse her till morning” (Bukhari 4.54.460).

And: “By him in Whose Hand lies my life, a woman can not carry out the right of her Lord, till she carries out the right of her husband. And if he asks her to surrender herself [to him for sexual intercourse] she should not refuse him even if she is on a camel’s saddle” (Ibn Majah 1854).

Islamic law stipulates: “The husband may forbid his wife to leave the home…because of the hadith related by Bayhaqi that the Prophet…said, ‘It is not permissible for a woman who believes in Allah and the Last Day to allow someone into her husband’s house if he is opposed, or to go out of it if he is averse” (Reliance of the Traveller

Islam is RIGHT about women? The way things are going, women in Winchester, Massachusetts and everywhere else in the U.S. better get used to this idea.