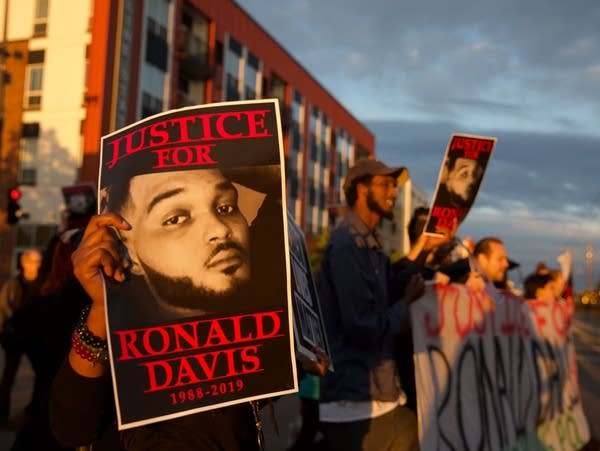 Police just released this bodycam footage to show that the officer was clearly defending himself.

ST PAUL, Minn. — The final moments of a man’s life are now public after the release of bodycam video in the officer-involved shooting of Ronald Davis.

St. Paul Police Chief Todd Axtell released the footage Tuesday afternoon at a press conference after promising he would do so in the name of transparency.

An emotional Axtell opened a news conference with the video up full, showing Officer Steven Mattson leaving his squad vehicle and immediately being attacked by a charging Davis. It is clear that Davis has an object in his right hand, one that appears to be a knife. Davis and the officer begin fighting, and Officer Mattson can be heard on the tape repeatedly yelling “Get away from me… drop the knife… drop the f—ing knife!” As he finishes yelling a gunshot can be heard.

“This video was difficult to watch as you all just saw,” said Chief Axtell after the video played. “The only solace I can take from this incident is that Officer Mattson was not seriously injured or killed. What I do know is this… his life will never, ever be the same. I remain hopeful that quickly releasing this video will allow us to move forward with some mature discourse about how such tragedies can (be presented) in the future without having to wade through the waters of irresponsible accusations of murder, calculated cries of injustice, and threats against one of my officers.”

The video was released Tuesday, after the community gathered Sunday to protest and mourn the death of Ronald Davis.

ST PAUL, Minn. — Sunday night, protesters gathered in St. Paul over an officer-involved shooting that happened exactly one week ago.

Ronald Davis, 31, was shot and killed by a St. Paul police officer on September 15.

Protesters marched from the St. Paul Police Department Western District to the site of Davis’ death—less than a mile apart.

“When I heard the news, I was shocked because he was a very respectful, kind person,” said Abdiaziz Farah, who had recently gone to school with Davis.

More than 60 protesters gathered outside the Western District, voicing their concerns over Davis’ death and other officer-involved shootings that have happened in Minnesota. Several people spoke about their experiences losing a family member, killed by police.

On September 15 at 5:50 p.m., police said Davis rear-ended Officer Steven Mattson’s squad car while it was stopped at a stop sign at the intersection of Thomas Avenue West and North Griggs Street.

The BCA said when Davis came out of his car, he was holding a knife and ignored the officer’s commands to drop it. During the confrontation, Mattson shot Davis. According to the BCA, a knife was recovered next to Davis’ body.

The Department was wise to release the bodycam video as early as they did, but it remains to be seen if this will appease those in the community who question the shooting.

Hopefully this will not escalate to the level of the Trayvon Martin and Michael Brown incidents, where evidence was not released in a timely manner and simply ignored by many when it was.

Thugs burned Ferguson, Missouri the last time a fellow thug was shot by a cop in self-defense.

At least Trump won’t be claiming that Ronald Davis could have been him 35 year ago.

Donald Trump is not a race-baiting thug sitting in the oval office.

Hopefully America has learned her lesson the last time we had one of those.