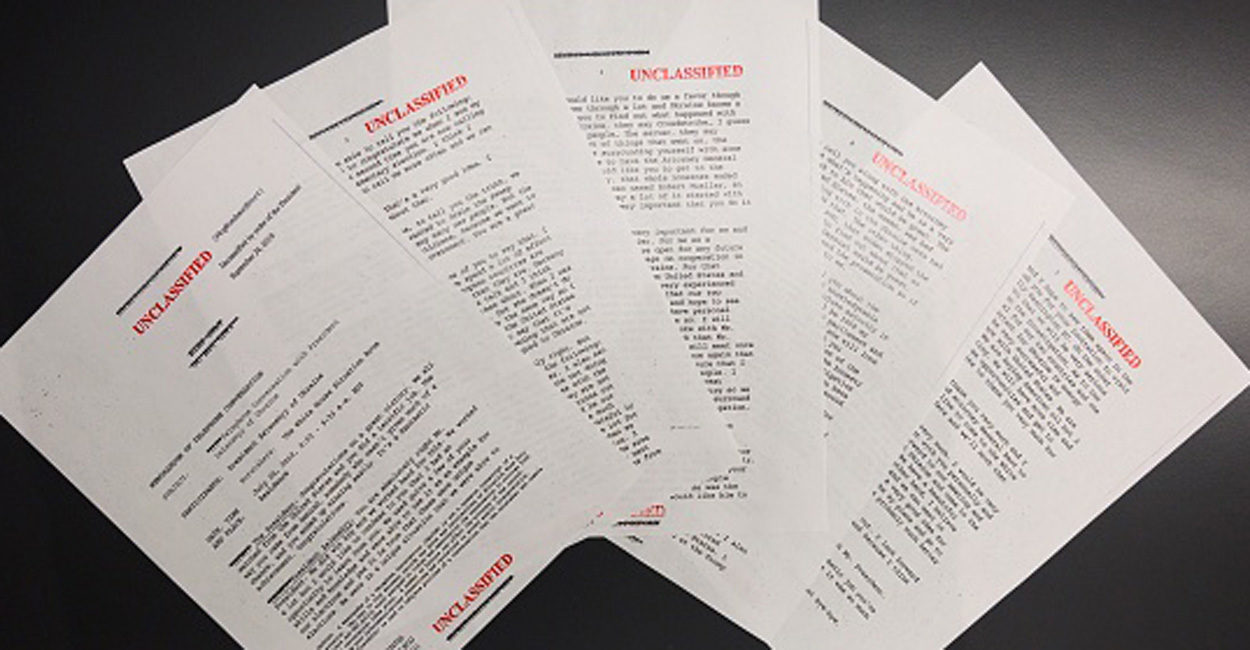 A transcript of the July 25 phone call between President Donald Trump and Ukrainian President Volodymyr Zelenskyy shows the two leaders did talk during their brief conversation about an investigation involving Joe Biden and his son.

Neither man, however, mentioned military aid to Ukraine that might hang in the balance.

The White House released the complete official transcript less than a day after House Speaker Nancy Pelosi, D-Calif., announced an official impeachment inquiry, based largely on the suspicion that Trump had threatened to withhold military assistance from Ukraine unless it looked into the dropping of an investigation of the then-vice president’s son, Hunter Biden.

Trump acknowledged Sunday that the two leaders spoke about the Biden case.

The younger Biden sat on the board of a Ukrainian natural gas company for several years, reportedly making $50,000 a month. The elder Biden, vice president under President Barack Obama from January 2009 until January 2017, boasted on camera that he was responsible for the firing of the state prosecutor investigating the company.

Both leaders referred to “Biden” in the call, but didn’t use the first names Joe or Hunter.

Beyond fodder, or lack thereof, for House Democrats’ impeachment effort against Trump, the transcript also reveals the two leaders’ unflattering comments on Germany, the European Union, and Russia.

Here are six highlights from the call two months ago, according to the transcript released by the White House. (Punctuation is as it is in the five-page transcript.)

The two leaders spoke by phone four days after Zelenskyy’s new party in Ukraine’s parliament, Servant of the People, won what The Economist called the first single-party majority in modern Ukrainian history.

Ukraine’s new president didn’t mention Biden’s name, but was first to bring up that an aide spoke with one of Trump’s personal lawyers, former New York Mayor Rudy Giuliani.

Giuliani first said in May that he would meet with Ukraine officials about the Biden case. The former vice president later criticized the former New York mayor for this, and Giuliani canceled the trip.

“I will personally tell you that one of my assistants spoke with Mr. Giuliani just recently and we are hoping very much that Mr. Giuliani will be able to travel to Ukraine and we will meet once he comes to Ukraine,” Zelenskyy said to Trump.

“I just wanted to assure you once again that you have nobody but friends around us,” the Ukrainian president said. “I will make sure that I surround myself with the best and most experienced people.”

Later on in the conversation, after Trump explicitly mentioned Biden, Zelenskyy said: “I wanted to tell you about the prosecutor.”

2. What Trump Said About Biden Case

Trump seemed to be glad to hear this, and said he wanted to get Attorney General William Barr involved.

“Good because I heard you had a prosecutor who was very·good and he was shut down and that’s really unfair,” Trump said of events that occurred well before Zelenskyy’s April 21 election. “A lot of people are talking about that, the way they shut your very good prosecutor down and you had some very bad people involved.”

“Mr. Giuliani is a highly respected man,” Trump continued. “He was the mayor of New York City, a great mayor, and I would like him to call you. I will ask him to call you along with the attorney general. Rudy very much knows what’s happening and he is a very capable guy. If you could speak to him that would be great.”

Trump went on to say:

There’s a lot of talk about Biden’s son, that Biden stopped the prosecution and a lot of people want to find out about that so whatever you can do with the attorney general would be great.

Biden went around bragging that he stopped the prosecution so if you can look into it.  … It sounds horrible to me.

When speaking to a group of foreign policy experts in early 2018, Biden talked about how he had threatened as vice president in March 2016 to withhold $1 billion in U.S. aid if Ukraine’s government did not fire a prosecutor who was investigating the Ukrainian natural gas company Burisma, where his son Hunter was a board member.

Biden told the gathering on Jan. 23, 2018: “I said, ‘You’re not getting the billion.’ I’m going to be leaving here in, I think it was about six hours. I looked at them and said: ‘I’m leaving in six hours. If the prosecutor is not fired, you’re not getting the money.’ Well, son of a b—-, he got fired. And they put in place someone who was solid at the time.”

In the phone call, Trump told Zelenskyy: “I will have Mr. Giuliani give you a call and I am also going to have Attorney General Barr call and we will get to the bottom of it. I’m sure you will figure it out. I heard the prosecutor was treated very badly and he was a very fair prosecutor so good luck with everything.”

Zelenskyy at one point responded to Trump: “I wanted to tell you about the prosecutor. First of all, I understand and I’m knowledgeable about the situation.”

“Since we have won the absolute majority in our parliament, the next prosecutor general will be 100% my person, my candidate, who will be approved by the parliament and will start as a new prosecutor in September,” Zelenskyy said.

When Trump did talk about aid to Ukraine, it was in the context of other nations not doing their part to help the former Soviet republic.

Zelenskyy complained that other countries are not putting sanctions on Russia, which annexed the Crimea region from Ukraine and has been engaged in a slow-burning war with Ukraine for five years.

The contents of the transcript may upset some U.S. allies, namely German Chancellor Angela Merkel.

“I will say that we do a lot for Ukraine. We spend a lot of effort and a lot of time. Much more than the European countries are doing and they should be helping.you more than they are,” Trump said, adding:

Germany does almost nothing for you. All they do is talk and I think it’s something that you should really ask them about. When I was speaking to Angela Merkel she talks Ukraine, but she doesn’t do anything. A lot of the European countries are the same way.

Zelenskyy agreed that Trump was “absolutely right” and said he agreed “100%.”

“I did talk to Angela Merkel and I did meet with her. I also met and talked with [French President] Emmanuel Macron and I told them that they are not doing quite as much as they need to be doing on the issues with the sanctions,” Zelenskyy said, adding:

Trump obliquely brought up the Democratic National Committee’s computer server and the investigation of CrowdStrike, a cybersecurity firm involved in tracking Russian election meddling in the 2016 U.S. presidential election.

“I would like you to find out what happened with this whole situation with Ukraine, they say Crowdstrike,” Trump said. “I guess you have one of your wealthy people … The server, they say Ukraine has it.”

In 2016, the Democratic National Committee hired CrowdStrike, a U.S.-based internet security company. CrowdStrike reviewed the hacking of DNC computers and determined it was conducted by two groups affiliated with the Russian government.

The tech firm thus played a role in the sequence of events leading to the probe of whether Trump or his campaign conspired with Russians to gain advantage in the 2016 election. Special counsel Robert Mueller’s final report said investigators found no such conspiracy.

In the call with Zelenskyy, Trump referred disparagingly to Mueller, who had testified to Congress the day before on his investigation of Russian interference in the 2016 presidential election.

“There are a lot of things that went on the whole situation,” Trump said to the Ukrainian president, adding:

I think you’re surrounding yourself with some of the same people. I would like to have the attorney general call you or your people and I would like you to·get to the bottom of it. As you saw yesterday, that whole nonsense ended with a very poor performance by a man named Robert Mueller, an incompetent performance, but they say a lot of it started with Ukraine.

6. The Comedian, the Reality Show Host, and ‘Draining the Swamp’

Before his election as Ukraine’s president, Zelenskyy was a comedian, entertainer, and businessman with no electoral experience. He campaigned against corruption of the political establishment to unseat incumbent Petro Poroshenko with about 73% of the vote.

Those similarities with Trump, a real estate mogul, businessman, and reality TV star who was elected U.S. president, weren’t lost on the two leaders.

“We all watched from the United States and you did a terrific job,” Trump said. “The way you came from behind, somebody who wasn’t given much of a chance, and you ended up winning easily. It’s a fantastic achievement. Congratulations.”

Well yes, to tell you the truth, we are trying to work hard because we wanted to drain the swamp here in our country. We brought in many many new people. Not the old politicians, not the typical politicians, because we want to have a new format and a new type of government … You are a great teacher for us and in that.

Ken McIntyre contributed to this report.