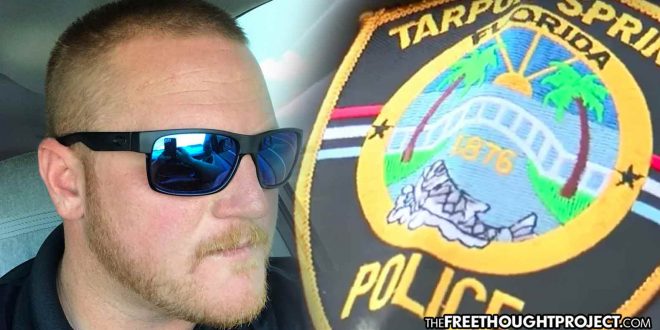 Tarpon Springs, FL — Since the tragic shooting in El Paso, Texas in which a deranged gunman murdered 22 people inside a Walmart, law enforcement have been making dozens of arrests. These arrests consist of people who have been threatening to carry out a mass killings. One person, however, recently threatened to carry out a mass shooting — twice — and he has yet to be arrested. His occupation is a police officer.

Detective Steve Begren was talking to a fellow police officer last month when he made the threat, claiming that there would be an “active shooter situation” at Tarpon Springs Police Department headquarters if he didn’t get the promotion he wanted, according to the agency.

This was not perceived as a joke by the fellow cop and, in fact, he was immediately worried about Begren’s comments.

“The detective said it was something that made the hairs on the back of his neck stand up,” said Tarpon Springs Police Maj. Jeffrey Young.

Begren would later email Tarpon Springs police Chief Robert Kochen and tell him that he was “joking.” However, his fellow cops did not buy it. As the Tampa Bay Times reports, Young said law enforcement cannot ask the public to watch out for “red flags” ― signs of potentially dangerous behavior ― and ignore such a sign under its own roof.

“In his letter he says it was in jest, but in hindsight it was ill-advised,” Young said. “In today’s society you just can’t say something like that and not be held accountable for it.”

Bergen would reportedly resign last Thursday before he was fired.

“During the course of this conversation, I made a statement in jest referencing an active shooter,” Bergren wrote. “I never imagined when the statement was made that it would be perceived … as a potential threat to our shared workplace.”

But the agency did not perceive these words as a joke and noted that no one was laughing and Bergren had a “stoic” look when he said it.

“The other detective said Bergren made this statement in a stoic manner and not giving any indication that this was a joke,” the agency said.

What’s more, according to the Tampa Bay Times, this was not the first time this police officer threatened to carry out a mass shooting. On May 10th, he did the same thing.

During the investigation, police said they learned that on May 10, Bergren made a similar comment to other coworkers about what would happen if the police department didn’t appoint him to the Pinellas County Sheriff’s Office’s county-wide drug task force. The comment was also made “in a stoic manner,” the agency said.

During that incident as well, Begren claimed to be “joking,” and apparently the department let it slide, despite it also being in a “stoic manner.”

The officer has since resigned but has not lost his law enforcement license and has not been arrested. This is in spite of the fact that other people — who also claimed to be “joking” about committing mass murder — were arrested.

One example comes from the dozens of arrests made since the El Paso shooting in a threat by Randy Jason Szymanski, 35. Szymanski was arrested by police just down the road from Begren in Wildwood, Florida, on Aug. 26 after allegedly posting a threatening message on Facebook.

“Hey Ocala Federal Bureau of Investigation I’m gonna bomb a Sun Trans Bus,” Szymanski allegedly wrote. After his arrest, he told police the post was a “joke” and he had wanted to get the attention of the FBI.

They did not believe him and Szymanski was thrown in jail.

With folks across the country having their guns confiscated under red flag laws for not threatening two mass shootings, it is perplexing, to say the least, as to why this cop wasn’t even questioned. Considering the fact that this was the second time he’s done this, he should have been at the very least, brought in for an evaluation.

While cops threatening to go on mass shootings may seem a little outlandish, TFTP has reported on it several times. The most recent case was actually out of Florida as well when a school cop climbed up on the roof of a school and pretended to pick up a rifle and then took aim at the kids below.