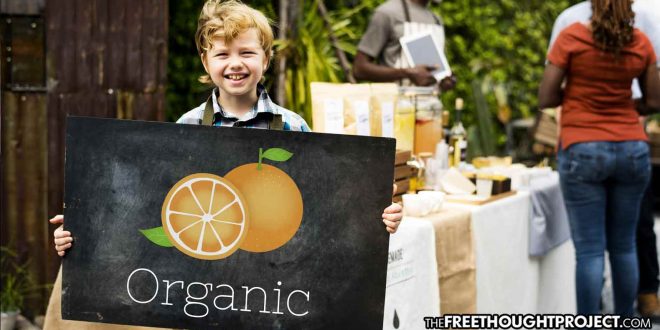 Forest Park, GA — Children at Little Ones Learning Center are not only excelling at spelling and math but they are doing something amazing and growing their own organic food. What started out as a lesson in gardening has morphed into an amazing enterprise that provides organic vegetables to children and a community. However, because this preschool’s enterprise is not in the correct government-approved location, they have been shut down by bureaucrats.

“It was a place for children who were having hard days,” Little Ones Executive Director Wande Okunoren-Meadows told the Mother Nature Network. “I know I go stir crazy if I’m sitting indoors for a long period of time. ‘You’re having a hard time inside? Let’s go outside, play in the dirt and find some worms.’”

According to the school, the goal of the gardening program was to influence food preferences for children. However, the preschoolers took it a step further and began providing residents in the surrounding neighborhoods access to organic fruits and vegetables. Last year, they grew so much food they began selling it in a farm stand.

For nearly a year, residents and children alike were able to benefit from the nutritious and locally grown produce. That is, until the city’s zoning commission got wind of the  children entrepreneurs who would dare sell a tomato in a residential area.

Last month, Forest Park City Hall forced the children to shut down their farm stand because it wasn’t in a commercial zone. Seriously.

Not only has the city brought the children’s incredible operation to a screeching halt but they are unapologetically standing by their decision.

“Anywhere you live, you’ve got to have rules and regulations,” Forest Park City Manager Angela Redding said. “Otherwise, you would just have whatever.”

According to Redding, if the city wouldn’t have shut down these children, there would be farm stands popping up all over the place and organic fruits and vegetables would flood the streets of Forest Park. The thought of organic vegetables being sold on the corner was so horrific that they just had to shut it down, or “whatever” might ensue.

As Kerry McDonald eloquently points out:

That “whatever” is exactly the hope and promise that irks central planners. Whatever symbolizes what is possible when individuals and organizations spontaneously create new streams of value for their neighbors. Whatever are opportunities for mutual gain through voluntary exchange. Whatever are new inventions, new services, and new ways of living and being that augment our existence and improve our future. Whatever is freedom.

Indeed. And if there is an enemy of freedom, it is the government bureaucrat high on their power who thinks that little kids selling organic vegetables is a problem.

Sadly, this decision to shut down the preschool’s gardening operation will have more of an impact than just pissing off libertarians. The Little Ones preschool is in an underprivileged part of Georgia and this garden was helping them improve their situation vastly.

“According to the United Way, Clayton County has the lowest child well-being index out of all the metro Atlanta counties…So if we’re trying to move the needle and figure out ways to improve well-being, I’m not saying the farm stand is the only way to do it, but Little Ones is trying to be part of the solution,” Okunoren-Meadows told MNN.

“If they’re going to Piggly Wiggly and all they’re seeing is Taki chips and chemicals, that’s all they’ll know,” she said. “We just need to bring our city up to date.”

Okunoren-Meadows is now fighting city hall and trying to get them to understand that selling vegetables is not a threat to their order.

Yes, we can probably all agree that we don’t want someone building a commercial crack house in the empty lot in the neighborhoods in which our children play. But this decision for zoning a garden for children into a completely different part of town — away from the school and the neighborhood — is only serving to hurt the community.

Highlighting just how absurd, asinine, and arbitrary the city’s decision is to rezone the garden, they offered the school the ability to pay $50 a day for “special event” permit to host their farm stand. And through the offer of this permit, we see the government’s true intentions exposed. You can operate anything you want—you just have to pay us for the privilege of doing so, first.

Unfortunately, the abeyance of children-run enterprises like selling vegetables or running lemonade stands is common practice throughout the ostensible land of the free.

In February, an 11-year-old boy was visited by police for operating a hot chocolate stand.

Last year, in Ballston Spa, New York, police were dispatched to a lemonade stand—run by a 7-year-old boy—to shut it down for operating without a permit.

In Portland, Ore. an 11-year-old girl wanted to sell mistletoe from their farm at a holiday market to help her dad pay for her braces, which cost $5,000. But the Parks Bureau refused to let her set up without a permit. She was told she could beg instead.