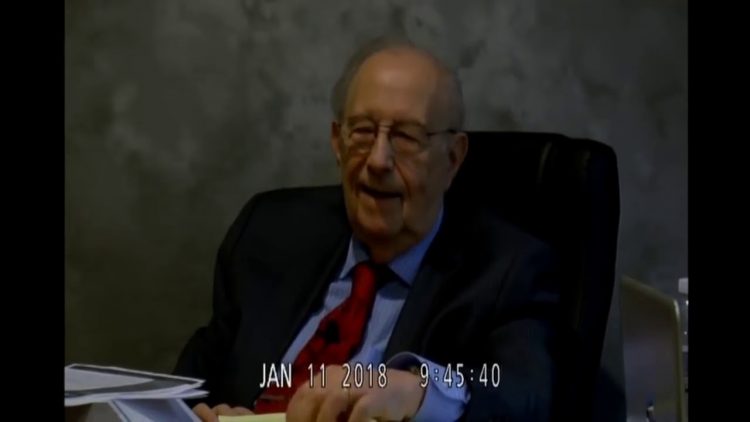 On Monday, I reported about how vaccine creators are merging animal and human DNA from murdered babies and inputting them into vaccines and then injected into people.  Well, it’s one thing when I write that, or even the source I quoted from, but when the sources are quoting the Center for Disease Control (CDC), Encyclopedia Britannica and other science outlets, that tends to make that information carry a lot more weight.  This is why this report will carry even more.  Stanley Plotkin, known as the godfather of vaccines and has worked for all four main vaccine manufacturers, was captured in a nine-hour deposition admitting that murdered children’s cells were used in the creation of vaccines and that those vaccines were tested on the mentally insane, orphans and children whose parents were in prison.

Plotkin is most famous for developing the Rubella vaccine and the Rotavirus vaccine.

Stanley Alan Plotkin (born May 12, 1932[1]) is an American physician who works as a consultant to vaccine manufacturers, such as Sanofi Pasteur, as well as biotechnology firms, non-profits and governments. In the 1960s, he played a pivotal role in discovery of a vaccine against rubella virus while working at Wistar Institute in Philadelphia. Plotkin was a member of Wistar’s active research faculty from 1960 to 1991. Today, in addition to his emeritus appointment at Wistar, he is emeritus professor of Pediatrics at the University of Pennsylvania. His book, “Vaccines

”,[2][3] is the standard reference on the subject.[4][5] He is an editor with Clinical and Vaccine Immunology, which is published by the American Society for Microbiology in Washington, D.C..

However, in this nine-hour video deposition, he describes how they used monkeys, mice, cow, and human aborted fetus cells to create vaccines and the issues that vaccines can cause.

Plotkin also discusses the use of human DNA fragments in vaccines and the link “with epidemic childhood leukemia and lymphomas.”

Below the video deposition, I’ll provide more on the use of murdered baby DNA in the use of vaccines in a minute, which not that murder of babies shouldn’t already be considered a crime, but even when men write unlawful laws limiting the use of such cells, wicked men ignore those too.

Our friends at Families4VaccineChoice provide the following commentary:

I find it extremely interesting when he talks about using aborted fetus cells in the vaccines. A great many people use the argument that the aborted fetus cells came from a fetus in the 60s and no new fetuses are being used in the manufacture of vaccines. However, while watching the first video you will hear Stanley Plotkin say that aborted fetus cells for the vaccines are only good for 50 years…although it wasn’t said, that would mean that they have had to (in the last decade) obtain more fetus cells in order to REFRESH the supply. A lot of people give that as a reason they don’t agree with religious exemptions against the vaccine, but if they are still using fresh babies (I don’t think of them as fetuses, but as babies because they have a heartbeat already which can be heard at least by 6 weeks), then religious exemptions cannot be done away with.

In regards to personal of philosophical exemptions, those must remain for the mere fact that doctors are now being persecuted for giving medical exemptions. I found that my child having had seizures and being hospitalized for a weeks, and my grandchild having seizures and being hospitalized for a week, will not get them out of being “required” to get vaccines. It would only eliminate the MMR vaccine for them. Even though the other vaccines with toxic chemicals would be required for them to go to school or day care, and if some states pass the laws they want to, it would keep them locked up like prisoners even though they are not the ones who are sick and passing along the disease. The fact is that vaccines shed the viruses they are suppose to “immunize” you too. So in fact, those who are getting the MMRII and other vaccines are shedding that live virus for almost 30 days, which is why it is recommended not to go around anyone pregnant, immuno-compromised, or newborn babies for 28 days, because you will give them the vaccine strain of the disease. The only way to get immunity to any disease is to actually get the disease, which is why vaccines require boosters every few years.

Yes, they are 9 hours of testimony, but I think regardless of whether you support vaccine choice and parental rights to choose, or you are fighting to retain those rights, you really need to watch them all. You can’t fight the fight without the education.

For many years, I’ve been researching the subtleties of how our bodies handle toxins and where those toxins come from, but trustworthy sources are getting harder to find!

Note the words: “MRC-5 cells including DNA and protein“, aka “MRC-5 human diploid cells.” During sexual reproduction, gametes (sperm and egg cells) fuse at fertilization to form a diploid zygote – in this case a human BABY.

ALERT: You need to be downloading docs and pages before they disappear! The CDC has changed the “V Excipient and Media Summary” (above) to the “V Excipient Summary” this year, removing mention of some of the controversial components used during the production process (for example, compare this article’s MMR-II’s list of ingredients to the current V Excipient Summary’s, which removed the “WI-38 human diploid lung fibroblasts”). For complete lists of ingredients used in the v production process, we now need to go to the FDA’s website to view the “Package Inserts.” But they are not ingredient lists like we know them, so harder to wade through!! The pesky measles “outbreak” in NY led to its disappearance. The CDC is totally complicit in this vaccine scam.

“These vaccines… are grown in cultured human embryo fibroblast cell lines (WI-38 or MRC-5) because these are the only cells that replicate the viruses in high enough titer for mass production (the rubella vaccine strain itself was originally isolated from an aborted fetus with intrauterine infection).” (source)

If that was not concerning enough, the author goes on to point out how crimes are being committed beyond the murder of babies and knowingly injecting healthy people with vaccines that they know cause deadly cancers and diseases.

Dr. Theresa Deisher, lead scientist noted that, “Not only are the human fetal-contaminated vaccines associated with autistic disorder throughout the world, but also with epidemic childhood leukemia and lymphomas.”

The US government has known about the dangers of human DNA from aborted fetal cell-lines since at least 2005. They set guidelines which are supposed to keep the DNA at a specific limit, which they hypothesize won’t cause cancer.

With no safety studies they regulated the amount of human DNA to no greater than 10ng. Unfortunately, Dr. Deisher’s team found the fetal DNA levels ranged from 142ng – 2000ng per dose, way beyond the guesstimated “safe” level. Dr Deisher’s work is available on the Academic Journals website.

Friends, the CDC, the FDA and those beholden to Big Pharma don’t want this information out in the public square to be criticized because there is big money at stake.  Neither do a majority of politicians at the federal and state levels because they are getting goodies from these companies.

In my opinion, given the information available, we are fools for injecting ourselves with this garbage when we know the truth of what these people are doing to create these vaccines.  Don’t say you weren’t warned.