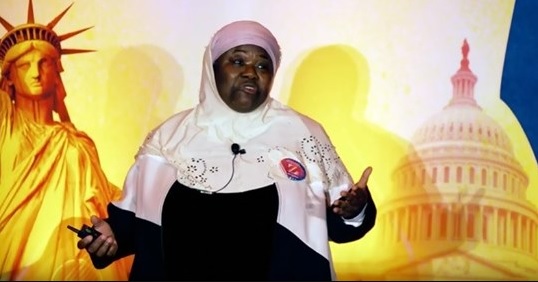 I’ve told you the Muslims are seeking and gaining political office and if Christians are going to stand down in the face of them and their false gods, well, you’re going to get what you deserve. The latest evidence is in Nashville, Tennessee, where Zulfat Suara won election for Nashville Metro Council at Large in Tennessee.

Suara is the first Muslim to be on the Metro Council.

News Channel 5 had the report this month.

Suara came to the united States from Nigeria in the 1990s and settled in Nashville in 1998.

Ms. Suara is also the chair of the American Muslim Advisory Council (AMAC).

To demonstrate those that she runs with, she has been a speaker every year at the Nashville Women’s March since 2017.

In 2015, according to the mayor’s office, 12 percent of people living in Nashville are foreign-born, compared to just two percent in 2000. Significant numbers of them are Muslim immigrants. In fact, Nashville now has the largest Kurdish population in the U.S.

Mosques are going up in Nashville at an alarming rate with the backing of Turkey and Saudi Arabia.

Well, Nashville, are you guys starting to see the problem you have there?  It’s the home of country music fod goodness sakes and you just elected a Muslim immigrant to your council.  What are you thinking?