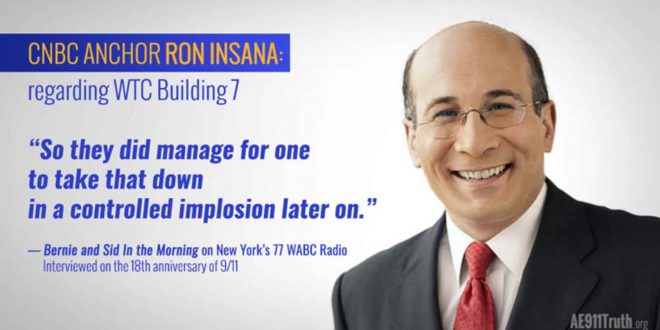 For more than a decade, many Americans never even knew WTC 7 fell—up to and including the person who was Secretary of Defense when the towers came down, Donald Rumsfeld.

In 2011, Donald Rumsfeld went on a radio and television tour to promote sales of his revisionist memoir. Of course, most hosts refused to ask him any questions of substance. However, one radio host hailing out of Chicago, Mancow Muller, was unafraid of asking hard-hitting questions.

On the show, Mancow asked Donald Rumsfeld what his thoughts were on World Trade Center Tower 7. His answer was ridiculous.

“What is building 7? …I’ve never heard that before.” said Donald Rumsfeld

Amazingly, some folks still believe that only two towers fell that fateful day back in September 2011. The fact that Tower 7, a 47-story building, collapsed, was but a small blip in the media. Since 9/11, World Trade Center Tower 7 is rarely, if at all mentioned in the mainstream media. However, all that now appears to be changing thanks to the persistence of thousands of dedicated individuals who’ve devoted large portions of their lives to making sure this information gets out there.

The continuous flow of information about how or what caused Tower 7 to collapse into its own footprint has become so vast that it is impossible to ignore. In fact, the mainstream media has now jumped on the bandwagon and what some of them are saying is nothing short of bombshell.

On the 18th anniversary of 9/11 earlier this month, CNBC senior analyst and former anchor Ron Insana went on Bernie and Sid In the Morning on New York’s 77 WABC Radio to share his experience of being at ground zero on that horrifying day in American history.

As A&E for 9/11 Truth reports, approximately eight minutes into the interview, Insana made a statement regarding the 47-story World Trade Center Building 7 — which collapsed late in the afternoon of 9/11 — that is truly stunning, especially considering his access to the scene and his job as a prominent news anchor:

“Well, remember 7 World Trade had not yet come down. And so when I went down to the [New York Stock] Exchange that Wednesday morning [September 12], I was standing with some military and police officers, and we were looking over in that direction. And if it had come down in the way in which it was tilting, it would have wiped out everything from where it stood to Trinity Church to the Exchange to, effectively, you know, the mouth of the Hudson. And so there were still fears that if that building had fallen sideways, you were going to wipe out a good part of Lower Manhattan. So they did manage for one to take that down in a controlled implosion later on. And the Exchange was up and running the following Monday.” [Emphasis added.]

What makes this admission by Insana so important is the fact that he says it so casually as if he’s known that it was brought down by explosions since the day it happened. This information took years to come to light and thousands of architects and engineers tirelessly pining away conducting study after study to come to these conclusions. But Insana, simply knew it. This suggests that he was told this information and that it may have been fairly common knowledge at the scene. Or, he like so many other people who witnessed Tower 7 fall, made this conclusion of controlled demolition by simply observing it.

As A&E reports, Insana is not the first person to have made such matter of fact claims about the collapse of Tower 7 or forewarning that it was coming down that day.

For instance, FDNY Lieutenant David Restuccio told MSNBC’s Brian Williams just minutes after the collapse: “We had heard reports that the building was unstable and that eventually it would either come down on its own or it would be taken down.”

Another is volunteer EMT Indira Singh, who, in 2005, told radio host Bonnie Faulkner: “All I can attest to is that by noon or one o’clock they told us we had to move from that triage site up to Pace University a little further away because Building 7 was going to come down or being brought down.” Faulker replied, “Did they actually use the word ‘brought down,’ and who was it that was telling you this?” “The fire department, the fire department,” Singh answered. “And they did use the word ‘we’re going to have to bring it down.’”

Then there are the unidentified construction workers and law enforcement officers captured on video just moments before the collapse, saying: “You hear that?” “Keep your eye on that building. It’ll be coming down.” “The building is about to blow up, move it back.” “We are walking back. There’s a building about to blow up. Flame, debris coming down.”

Insana’s statement is all the more remarkable because it appears that he is unaware of the debunked official story of Building 7’s collapse — according to which office fires leveled a skyscraper for the first time in history — and of the controversy that this story has caused over the past 18 years. Insana might be surprised to learn that there is controversy at all, given what he appears to have been told during his reporting and given the manner in which Building 7 came down — namely, that of a perfectly executed controlled demolition.

As TFTP reported earlier this month, a monumental study which took years to complete was published out of the University of Alaska Fairbanks which found that “fire did not cause the collapse of WTC 7 on 9/11.”

It seems that the more people ridicule this information, the more of it comes out. Those who were once considered kooks for questioning the official story are moving from the fringes and literally into the mainstream. After all, it is hard to dismiss multiple fire commissioners as kooks who were first responders that day  when they ask for a new investigation, citing the use of explosives.

Watch for yourself below.