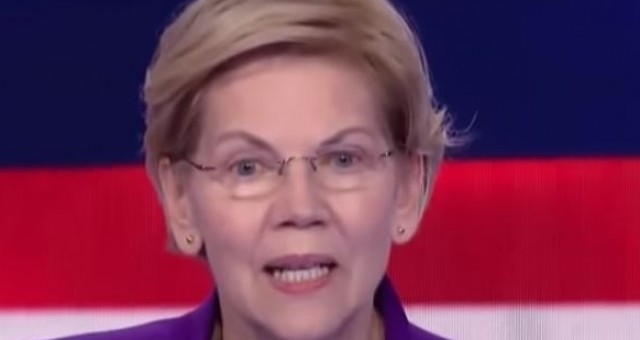 OPINION| ICYMI -It’s clear that Democratic Massachusetts Representative Elizabeth Warren has been looking to make headlines, and her campaign stop in Jackson, Mississippi seemed to be just the place to do that.

Diamond and Silk reports, “The CNN town hall on Monday night included her telling the Mississippians that they ought to change their state flag due to its reflection of the Confederate flag. She pitched an ‘ultra-millionaires tax,’ criticized ‘giant financial institutions,’ and told the crowd that Congress should mandate White Americans pay money to Black communities to atone for slavery.”

It was reported by Politico that Warren was the first 2020 presidential candidate to really mention the thought of reparations.

“I love the idea of this congressional commission,” the Democrat said in front of an audience at Jackson State, a university that has been known to have a black majority of students. “I believe it’s time to start the national, full-blown conversation about reparations.”

As reported by Politico:

The bill, which former Rep. John Conyers (D-Mich.) first introduced in 1989, was reintroduced by Rep. Sheila Jackson Lee (D-Texas) in January. “The commission would also make recommendations concerning any form of apology and compensation to begin the long delayed process of atonement for slavery,” Jackson Lee said earlier this year.

Warren and most other 2020 candidates have cautiously approached the topic of reparations, wary of alienating voters by fully embracing the idea or being dismissive of it. Sen. Kamala Harris (D-Calif.) has endorsed the concept but has not provided details. Sen. Amy Klobuchar (D-Minn.) and former Rep. Beto O’Rourke (D-Texas) have not endorsed the idea but have said that robust steps must be taken to combat systemic racism.

Senator Warren endorsing the idea of reparations wasn’t all she had to say on Monday evening. She told the crowd, which was crowded with African Americans, that Mississippi should remove the stars and bars of Confederacy from their state flag. She went on to speak about her housing bill which would allow for special assistance for those communities that had formerly been redlined, saying that white supremacists as as big of a national security risk as “any other terrorist group — like ISIS, like al-Qaida.”

The Massachusetts Senator went on to criticize oil companies and “giant financial institutions,” calling for her “ultra-millionaires tax” to be enforced.

Diamond and Silk report that Warren “received a positive reaction from the crowd when she discussed the role of faith in her life. Warren said she was raised Methodist and referenced the story of the sheep and the goats in the book of Matthew. She said a Bible school lesson on the story taught her that ‘there is God, there is value in every single human being’ and that ‘we are called to action.’”

Not much has come out of proposals of retribution in the past.

Some ideas of the reparation include a specific, or targetted tax, while others include voluntary calls for donations to organizations and community groups.

Democratic presidential candidate Amy Klobuchar told NBC’s “Meet The Press,” that there should be an effort to payback for historical wrongdoing but that the payment did not have to be direct payments.

“I believe we have to invest in those communities that have been so hurt by racism. It doesn’t have to be a direct payment for each person,” Klobuchar said, as Politico reports.

Warren did not mention white people specifically, but who do you think is going to pay for this?  It would be counter intuitive for minorities to pay reparations to themselves.  Soooo … that just leaves those evil white guys and anyone else The Left wants to tear down.