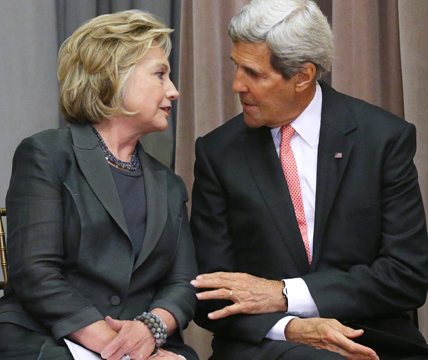 When do the real investigations into Democrat crime and corruption begin? The President blew the lid off their racketeering, it’s why they are hellbent on punishing him.

SCANDALS AT STATE: HOW CLINTON, KERRY USED OFFICE TO ENRICH THEIR FAMILIES

Corruption: What is it about Democrats and the State Department? Despite their repeated claims of transparency, it turns out that both Hillary Clinton and current Secretary of State John Kerry used their positions to enrich members of their own families — at taxpayer expense.

AS THE MURKY TIES BETWEEN THE CLINTON FOUNDATION AND HILLARY’S STATE DEPARTMENT BECOME CLEARER, A NEW REPORT FROM THE DAILY CALLER NOTES THAT CURRENT SECRETARY OF STATE KERRY’S DAUGHTER RECEIVED MONEY FOR HER NONPROFIT GROUP FROM STATE.

Indeed, the Daily Caller investigation shows that more than $9 million of State Department money made its way through the Peace Corps to the nonprofit started by Dr. Vanessa Kerry, John Kerry’s daughter. And the money was handed out without competition.

Kerry’s nonprofit, Seed Global Health, got its first contract in 2012. Yes, that was when Hillary was still in office. But John Kerry then was a senator who headed the Committee on Foreign Relations, which is charged with overseeing both the State Department and the Peace Corps.

There is a clear conflict of interest there.

That’s bad enough. But last year, in September, the Seed group got a four-year extension on its deal while John Kerry was secretary of state.

Another conflict of interest. Crony capitalism, anyone? Whether you think that what Seed does in Africa — it helps train doctors and nurses — is valuable or not, this no-competition grant to a nonprofit founded by a top official’s daughter reeks of rank favoritism at best, corruption at worst.

“Kerry and government officials colluded to launch the program and ensure that Seed would get the contract,” the Daily Caller concluded, after reviewing the relevant memos and papers related to the deal.

But it doesn’t end there. Because, even as the Kerry deal was being revealed, further strands of the heretofore hidden ties between then-Secretary of State Hillary Clinton, the Clinton Foundation and a mysterious Russian billionaire with close ties to Vladimir Putin are coming to light.

The Washington Examiner got its hands on emails showing that the Clinton Foundation sought ties with Russian billionaire Viktor Vekselberg at a time when he was in charge of an important element of then-Secretary of State Hillary Clinton’s “Russian reset.”

Hillary helped create “a major technology transfer initiative” that “may have substantially undermined U.S. national security,” according to Peter Schweizer, president of the Government Accountability Institute and the author of ” Clinton Cash.”

Part of the “reset” was the creation of “Skolkovo,” an industrial enclave near Moscow that was to become a kind of Russian Silicon Valley. The idea was to encourage U.S. firms to help out with both technology and investment, in exchange for market access.

Despite warnings from both the FBI and her own State Department about the possibility of Russia getting access to militarily sensitive technologies, Hillary went ahead with the program. Why?

All the way back in 2010, as Skolkovo was getting underway, former President Bill Clinton traveled to Russia to deliver a speech for which he was paid $500,000 by a mysterious Russian investment bank named “Renaissance Capital.” While there he met with a variety of movers and shakers, including Vekselberg.

With the Clintons, one hand always washes the other.

Now that it has been revealed that thousands of emails on Hillary’s unsecured home-brew server have been intentionally destroyed, it is certainly fitting to wonder whether damning or incriminating evidence about the Clinton Foundation and its ties to Hillary’s office at the State Department was destroyed.

The U.S. State Department used to be known for its high-toned and principled stands in defense of U.S. foreign-policy goals and interests. But today, after two Democratic leaders, it appears to be more of a revolving door for crony capitalists.

We would hope Congress would continue to investigate the email scandal and what appears to be rampant abuse of office that has taken place at the State Department over the past eight years. Such clear conflicts of interest used to raise political hackles.

Congress should, at minimum, make sure that future secretaries of state no longer abuse their office to personally enrich their families and friends. Anything less is to condone criminality.