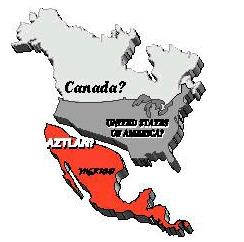 Is this why we get so many promises and so little actual help in securing our Southern Border?

Are the Mexicans actually trying to assist in our invasion?

A conspiracy theorist might claim that Mexico is complicit in trying to flood America with people of Hispanic descent and reclaim what they may feel is rightfully theirs.

More on that in a moment…

MEXICO CITY – Alarmed by the rise of hate crime in the U.S., Mexico is calling for a summit of leaders from Spanish-speaking nations to develop a strategy to combat white supremacy.

Roberto Velasco Alvarez, spokesman for Foreign Minister Marcelo Ebrard, said the Mexican government has already reached out to key ambassadors posted in Mexico and hopes to hold the summit in Mexico City by the end of the year in which leaders would draft a policy position based on discussions highlighting political and cultural values.

“If white supremacists are calling for hatred, racial divisions, what is our response? We have to define our response, defend our culture, language, civilization, our existence,” Velasco said.

The summit, still in its preliminary stages, would involve leaders from Latin America, Spain and Portugal and include key Mexican American political and cultural actors, including Texas, said Velasco.

Patrick Crusius, 21, drove from his native North Texas to El Paso and on Aug. 3 walked into an El Paso Walmart wearing protective ear muffs, safety glasses and a high-powered assault style rifle. Police say he shot and killed 22 people and injured at least two dozen more. Minutes before, authorities say, he posted a manifesto online at the 8chan website filled with anti-immigrant rhetoric that detailed his intention to stop a “Hispanic invasion of Texas.”

Eight of the fatalities were Mexican nationals, prompting the government of Mexico’s President Andres Manuel Lopez Obrador to demand that Mexico be included in the investigation. Mexico also left open the possibility of filing a lawsuit against the gun company.

“This is a big issue for Mexico and for Mexican Americans in the United States,” said Velasco.  “But this is also a widespread issue for Latin America, the Caribbean countries, Spain and Portugal. The shooter wasn’t just going after Mexicans. He was targeting Latinos. Secretary Ebrard’s position is this can’t solely be a fight for Mexico, but it must be one for Latin America and beyond.”

Ebrard traveled to El Paso immediately after the shooting, demanding that Crusius be extradited to Mexico to face charges.  He called the crime an “act of terrorism,” saying “Mexico is indignant. We will not meet hate with hate, we will act with reason and within the law, but with firmness.”

In the manifesto, the author warns white Americans that foreigners are replacing them. He lays out his intention to kill Hispanics to reduce their numbers in America by instilling enough fear in them to get them to leave the country en masse.

The Mexicans are obviously being influenced by liberal media and politicians.

And… How in the world would they propose battling this mythical problem of “white supremacy” from behind their government desks in Mexico?

Why aren’t they talking about the problems with BLACK crime in America?

A man that could prove to be the most prolific serial killer in world history ILLEGALLY came from KENYA to America.

They have allowed many criminals, some of HISPANIC descent, to cross our Southern Border, as well.

Still the Mexicans are uptight about America becoming a land of White Supremacy and looking for a way to fix it?

Maybe they have already started.

Sometimes I wonder if this entire border crisis is orchestrated and aided, by many, to help Mexico regain what they may feel was stolen from them.

Every heard of Aztlan?

Here is a brief description from Mayorno.com:

The myth of Aztlan can best be explained by California’s Santa Barbara School District’s Chicano Studies textbook, “The Mexican American Heritage” by East Los Angeles high school teacher Carlos Jimenez. On page 84 there is a redrawn map of Mexico and the United States, showing Mexico with a full one-third more territory, all of it taken back from the United States. On page 107, it says “Latinos are now realizing that the power to control Aztlan may once again be in their hands.”

Shown are the “repatriated” eight or nine states including Colorado, California, Arizona, Texas, Utah, New Mexico, Oregon and parts of Washington. According to the school text, Mexico is supposed to regain these territories as they rightly belong to the “mythical” homeland of Aztlan. On page 86, it says “…a free-trade agreement…promises…if Mexico is to allow the U.S. to invest in Mexico…then Mexico should…be allowed to freely export…Mexican labor. Obviously this would mean a re-evaluation of the border between the two countries as we know it today.” Jimenez’s Aztlan myth is further amplified at MEChA club meetings held at Santa Barbara Public Schools..

The book, paid for by American tax payers, cites no references or footnotes, leaving school children totally dependent on their teacher to separate fact from opinion and political propaganda. The book teaches separatism, victimization, nationalism, completely lacks patriotism towards the United States, and promotes an open border policy. The book is 100 percent editorial — the opinions of the author. How is it that those who cross our Southern Border can travel hundreds of miles without being stopped and detained in Mexico?
How is it that they somehow illegally cross into Mexican territory without being arrested?
Why does Mexico allow them to continue North so that they can become OUR problem?
These are legitimate questions.

And now that Mexico is calling upon ALL other Spanish speaking nations, including Spain and Portugal (which speaks Portuguese), to meet and talk about American White Supremacy, it does make one wonder…

Is this whole Southern Border problem really about a proud people who are trying to reclaim what they feel is rightfully theirs?

Why else would we get so little real help from Mexican authorities?

It’s almost like they don’t want to help, so that those illegals can become OUR problem, despite the fact that they illegally entered Mexico as well.

The politicians may want our resources and they may be willing to sell the Aztlan story to rally their people.

Mexico wouldn’t stand a chance against America and they know it.

But if you add several other armies to fight beside them, they may feel they have a chance.

Maybe they are not fully committed to helping us stop the illegal border crossings for a reason that is a bit more nefarious than their oerceived lack of resources to stop it.

Maybe they think they can take what is ours.