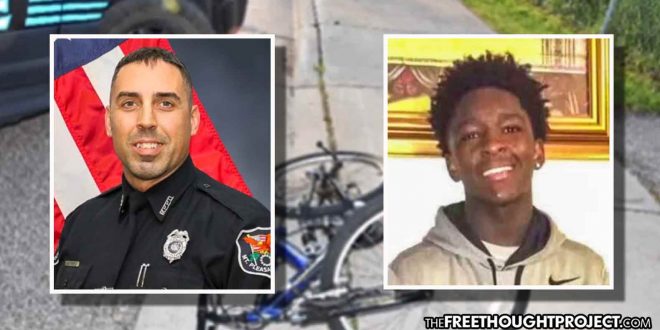 Mount Pleasant, WI — In the land of the free, police can and will detain and extort you for improper bicycle lighting. If you try to escape this extortion, you can be mowed down by a police cruiser, mauled by a police K9, or, as the following incident illustrates, you can be shot in the head and killed. What’s more, the officer who does attempt to maim or kill you will almost never be held accountable as they are just doing their job.

Ty’Rese West, 18, was shot and killed by Mount Pleasant Police Sgt. Eric Giese in June over this very matter. West had not harmed anyone and was merely targeted for extortion by Giese because he didn’t have a light on his bicycle while riding at night. Because he was shot in the head and killed, we will never know why West decided to run that night, but he likely didn’t want to be extorted, kidnapped, or hurt. Sadly, this is what led to his death.

Last Week, Racine County District Attorney Patricia Hanson announced that Giese was justified when he shot West in the head twice, claiming he acted in self-defense.

Hanson determined that “Sergeant Giese’s actions in this case fall under the privilege of self-defense,” and as such, “no charges will be filed against Sergeant Giese in this case,” Racine police, who led this investigation, said in a statement.

How, exactly, a police officer — who was the aggressor as he initiated the stop for extortion — is able to claim self-defense when he was the one who chased down the person who was running from him, is a mystery. Unfortunately, however, it is par for the course.

“I want a thorough investigation done, and also to see Eric Giese locked up,” said Dwight Person, West’s father, after his son was killed. But this will not happen.

Prior to hearing the DA’s announcement, West’s mother Monique West, explained that she knew this was going to happen.

“Scared. Numb,” said West of how she felt before the announcement. “I just — I just want to hear what she is going to tell me.”

According to police, West was armed with a gun when the chase ensued. This is a detail that the family disputes, claiming their son never owned a gun. Also, had Giese not attempted to extort an 18-year-old over a bicycle light, this detail is entirely irrelevant as West was not shooting at anyone when he was targeted for extortion.

As the Journal Sentinel reports, when the officer attempted to stop West for the bicycle light,

West dropped his bike and began to run, and Giese chased after him on foot. Giese was holding his radio in his hand because it was new and he couldn’t clip it onto his uniform. He deployed his Taser but the prongs didn’t reach West. He saw West throw the gun and then fall to the ground.

Giese caught up to West, who was on his stomach and knees and was reaching his arm out to his gun about 1 to 3 inches away on the ground. Giese had both hands full with his radio and his gun, and he stepped on West’s hand to stop him from reaching the gun.

Standing with his legs on either side of West, Giese was telling him to stop moving, but West did not. He was reaching for his gun and trying to push up under Giese, a move that would knock him over.

Eventually West pulled his hand free from under Giese’s boot and had access to the gun. Fearing West would shoot him, Giese pivoted to be about 3 feet from him and fired three shots, including two that hit his head.

Because West is dead, we have to rely on the word of the police officer who killed him because he failed to turn on his body camera and catch any of the exchange on video.

According to police, Mount Pleasant officers are allowed discretion when activating their body cameras, so this was not a violation. This is a policy we think should be changed immediately, especially when police officers are shooting teens in the head over stops for bicycle lighting.

“Officer involved shootings are extremely tragic, and the aftermath is difficult to navigate for the community and law enforcement alike,” Mount Pleasant Police Chief Matthew Soens said in a statement. “We offer our condolences to the West family and for all those who are mourning his loss.”

No amount of condolences will ever bring back West, however. And now, the family will have to watch as the officer who killed their child returns to full duty.

“With the district attorney’s decision now final, and our own internal investigation near completion, Sergeant Giese is expected to return to unrestricted full-duty status to resume his assigned responsibilities,’ Soens said.

Sadly, this sort of stop and violence over improper bicycle riding and lighting is not uncommon. In fact, last month, TFTP reported on the case of Byron Lee Williams, 50. Williams was riding his bicycle last month when police noticed he did not have the proper safety light. So, they targeted him for extortion and possible kidnapping. Not wanting to be extorted or kidnapped, Williams rode off on his bicycle. Moments later, this man would be dead—his last words, “I can’t breathe.”

As TFTP previously reported, an officer’s dashcam video showed a disturbing scene unfold as a police officer stops a man on a bicycle. An unarmed, shirtless, shoeless man is mauled for several minutes by a police K-9.

The reason for the stop was the cyclist was riding without a light on his bike.

Also, another incident was captured on video in which an officer attempted to cause grave injury to a child by running him over with his cruiser. The child’s crime? He was riding his bicycle without the proper lighting. Now, the taxpayers are going to be held liable for this cop’s actions.