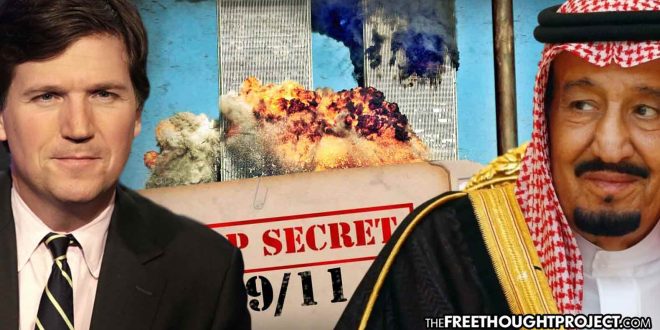 Last month, after an oil field was bombed in Saudi Arabia, President Donald Trump tweeted that “we are waiting to hear from the Kingdom…” to find out “under what terms we would proceed” to send them our military assets. The president of the United States admitted that he was waiting on orders to be handed down from a theocratic dictatorship in Saudi Arabia on how to use the men and women in the US armed forces. Naturally, this prompted backlash from all sides, and for good reason. Saudi Arabia is the largest state sponsor of terrorism in the world and they were behind the largest terror attack ever carried out on American soil, 9/11.

Despite knowing that the Saudis aided and funded the terrorists who flew planes into two world trade center towers that fateful day back in 2001, presidents George W. Bush, Barack Obama, and Donald Trump have bowed down to the dictatorial regime, quite literally.  The support the United States establishment pledges to the terrorist dictatorship in Saudi Arabia is an insult to every single person who has served or is serving in the armed forces and almost no one, especially in the mainstream media, is willing to say this…until now.

This week, FOX News’ Tucker Carlson, who is sometimes wrong and sometimes right, chose to break the media paradigm of silence on Saudi Arabia and report on their role in 9/11. The result was nothing short of bombshell.

During Tucker’s segment, he took to exposing how the FBI was told to remain silent on Saudi Arabia’s role in 9/11 and how they deliberately attempted to go after the victims’ families. He also pointed out documents showing that the United States knew Saudia Arabian officials aided the hijackers but continued to provide them with billions in weapons, and now our actual military.

The fact that FOX News is reporting on these facts is monumental considering mainstream media’s utter silence when it comes to this information. Just last year, the senate unanimously voted to declassify documents on Saudi Arabia’s role in 9/11 and it didn’t register as a blip on the mainstream’s radar.

When it comes to reporting on Saudi Arabia, the mainstream only reports on single incidents like the murder of Jamal Khashogg. They almost never mention how, in spite of knowing they funded the attacks on 9/11, both Obama and Trump have aided Saudi Arabia in genocide. As The Free Thought Project has reported, the current situation in Yemen is nothing short of genocide, as there are 7 million civilians in starvation, and 19 million out of the country’s 27 million population “in need of some form of aid.” Saudi Arabia has repeatedly facilitated famine, continued to murder children, and all of it is with the help and approval of the United States.

Tucker went further in his report too and noted how Saudi Arabia funds and supports Al Qaeda and called out Bush for helping Osama Bin Laden’s family escape the United States days after 9/11. The fact that this information was allowed on mainstream media is heartening indeed. It is high time that Americans learn how billions of their tax dollars flow back and forth from a country behind the worst attack in US history and how we are arming this terrorist nation to the teeth.

For those who don’t recall, it is a fact that 15 out of the 19 hijackers on 9/11 were from Saudi Arabia. Also, in 2017, as Tucker reported, families of victims of the 9/11 terror attacks used a new law to go after Saudi Arabia in lawsuits for their role in the attacks. During the trials, evidence was revealed showing the Saudi Arabian embassy in Washington funded a “dry run” for the hijackings carried out by two Saudi employees.

For a decade and a half, Presidents Barack Obama and George W. Bush kept secret the alleged role Saudi Arabia played in the September 11 attacks on America. Because of the cozy relationship the US has with the terrorist nation—which Trump is complicit in maintaining—special interests within the government have chosen to protect their Saudi friends instead of telling Americans the truth about what happened that fateful day.

As Tucker noted in his report, the FBI and CIA are complicit as well. In fact, several whistle blowers have come forward and claimed that the CIA and FBI withheld intelligence data, essentially allowing 9/11 to happen.

The FBI agents who were tasked with investigating Osama bin Laden prior to 9/11 came forward last year with damning accusations noting that the CIA deliberately blocked them from informing their headquarters about future Al-Qaeda plotters present in the United States in 2000 and again in the summer of 2001.

“I am sad and depressed about it,” said Mark Rossini, one of the FBI agents assigned to the task force. “It is patently evident the [9/11] attacks did not need to happen and there has been no justice.”

The CIA stands accused of working with Saudi Arabia to actively cover up the intelligence which could’ve stopped the attacks from taking place that fateful day and no one has faced so much as a slap on the wrist, nor has the majority of the media ever chosen to report on.

“Saudi intelligence has admitted that they knew who these two guys were,” Andrew Maloney, an attorney for families said. “They knew they were Al-Qaeda the day they arrived in Los Angeles. So any notion from the Saudi government saying, ‘Oh, we just help out all Saudis here’ is false. They knew. And the CIA knew.”

As the US continues to give them weapons, provide them with military aid, and now promises them our troops, the Saudis are soaking it up and laughing in our faces.

As TFTP previously reported, when Canada refused to back down from their calls for the Saudi Arabian government to release the women’s rights activists the country is currently keeping in cages, the state sponsored group, Infographic-KSA (Kingdom of Saudi Arabia) tweeted a disgusting threat.

The threat consisted of a digitally altered image that depicted a plane flying toward Toronto’s CN Tower—in an obvious reference to 9/11.

The image was tweeted with the following caption, “sticking one’s nose where it doesn’t belong!” With another saying below, “He who interferes with what doesn’t concern him finds what doesn’t please him.”

For the hundreds of families currently suing the Saudi Arabian government for their role in 9/11 this tweet served as a kick in the teeth, yet the US is still bending over backwards to offer them our support. It’s disgusting.

Despite repeated pleas by activists and politicians alike, the US government has overwhelmingly looked the other way in the face of all the evidence and human rights abuses, opting instead to ignore it and sell the tyrannical, terrorist country weapons they are currently using to carry out genocide in Yemen. And now we are offering them our very men and women in the US military.

.@realDonaldTrump Despicable. Offering to place our military assets under the command of a foreign country—Saudi Arabia—is a disgrace and betrayal of my patriotic brothers and sisters in uniform and to our Constitution. We are not your prostitutes. You are not our pimp. pic.twitter.com/Cu1OewEMOC

Because the media has been so complicit in covering up Saudi’s role, the powerful nature of the video below cannot be understated. While we certainly disagree with Tucker Carlson on many issues, the report he did below definitely deserves commendation. Perhaps if more mainstream media journalists acted this way, the US would stop stealing trillions in taxes from Americans to help Saudi Arabia lay waste to the Middle East.