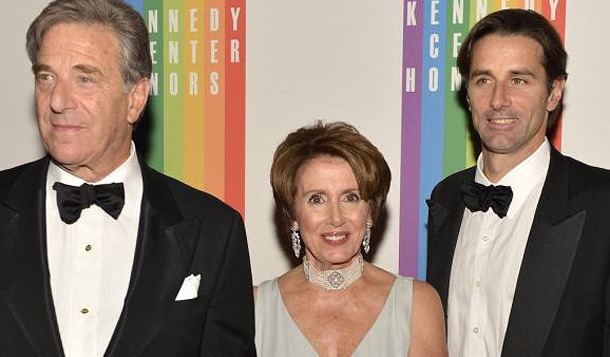 Now Nancy Pelosi’s son may be looking to take center stage with the Ukraine controversy.

BOOM: Nancy Pelosi's son Paul Pelosi Jr. (who went to Ukraine in 2017) was a board member of Viscoil and executive at its related company NRGLab, which DID ENERGY Business in UKRAINE!

And Nancy Pelosi appeared in a promotional video for the company!https://t.co/wlndLhPqLe

What in the hell?

BOTH Biden’s and Pelosi’s sons have strong ties to Ukraine?

Who goes to Ukraine?

I’m sure most people reading this have sent their sons to Ukraine at some point.

House Speaker Nancy Pelosi’s son Paul Pelosi Jr. visited Ukraine in 2017 to meet with government officials in connection to a business initiative. Now, unearthed records reveal that Paul Pelosi Jr. was an executive of a gas industry company that did business in Ukraine – and his mother Nancy Pelosi was featured in one of the company’s promotional videos.

Paul Pelosi Jr. travelled to Kiev, Ukraine in July 2017 in his capacity as executive director of the Corporate Governance Initiative, a position that he accepted months earlier in February 2017. Pelosi Jr. said that he was in Ukraine to discuss a youth soccer partnership with the government.

The American Mirror, which flagged Pelosi Jr.’s appearance in 2017, preserved a clip of Pelosi Jr. on the Ukrainian station following the video’s removal from YouTube.

On March 5, 2013, NRGLab New Technology posted two videos on Youtube. One video opened with a clip of Nancy Pelosi discussing energy-efficient technology, followed by a direct-to-camera statement from her son Paul Pelosi Jr., filmed in Washington, D.C. in 2010.

“My name’s Paul Pelosi. Of course I’m on the board of Viscoil. And Viscoil is here today to talk about accelerating the future. It’s about using cars in a more efficient manner. It’s about utilizing natural resources, whether it be electricity, or gas, or fossil fuels in a more efficient way. And Viscoil is a part of that solution,” Paul Pelosi Jr. said in the video.

Read the Rest at Nationalfile.com

Big Name Dems (and their offspring) are really piling up now with this Ukraine controversy.

Adam Schiff’s son, Elijah, is just 17 and probably wouldn’t be much help at this point.

John Brennan’s son is old enough to help but probably just lazy, or possibly training for jihad on American soil.

What in the hell is going on with Ukraine and the Democrats?

The Clintons and Obamas have no male offspring, but this certainly seems like a family affair.

Corrupt Democrats that play together, stay together.