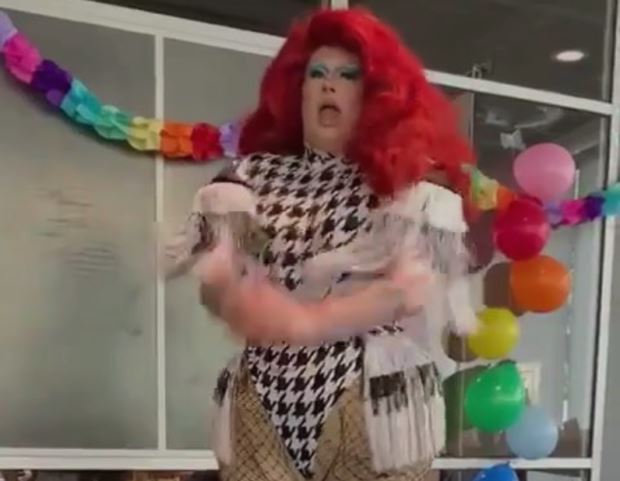 Louder with Crowder’s Courtney Kirchoff asks a very poignant question about what you are about to see, “How does this promote reading?”

Maybe I’m just an idiot, but how does a man dressed as a woman dressed as a slutty clown performing a strip-like dance, thus triggering one’s gag reflex, promote books? Someone explain it to me like I’m six. I just fail to see the connection between twerking weirdos and inspiring our youths to read. Like this walking freak stick. He performed a strippy strip dance while dick-equipped for a group of young children and their parents who deserve a stern talking to. Not a yelling at, no, no. A quiet, close in, chilling lecture. The kind your mom gave to you that sent poos sliding right out of your rectum. According to the tweet, this happened in King County, Washington. Home of Starbucks, Microsoft, and heroin needles in the streets.

Full disclosure, though the tweet is from yesterday, the twerk princess dirtied it up during the summer vacation months.

To be perfectly clear, I don’t care if men want to dress as lady clowns and get their freak on. But why are men dressing as lady clowns and getting their freak on at a public library, a building and institution which is technically owned and operated at the behest of taxpayers? Further, why are teenagers and young children the target audience of such adult shows better suited for a seedy bar sandwiched between two perpetually dark buildings on the bad side of town?

Read more at Louder with Crowder…

Our culture has become toxic.

When Drag Queens cause snipers to be deployed to protect drag queens from Christian pastors, we need to fully dissect what is really going on in America.

Even when the libraries object, we have politicians inviting Drag Queens to perform at City Hall.

This seems to be just one part of the master agenda of ripping American culture apart and shredding morality before our very eyes.

At least one of the Drag Queens has come forward to shed some light on what is really happening.

You work tirelessly to raise your children and grandchildren correctly and along comes the LGBT movement to try to tear down everything you have built. It’s about ‘Grooming of the Next Generation.’

How can we expect future generations of Drag Queens to carry on the tradition if they aren’t mentored and recruited in America’s Public Libraries?

These people make me sick.

Once again, “How does this promote reading?”

They are not trying to nurture your children’s minds.

They are trying to gain control over their minds (and souls).