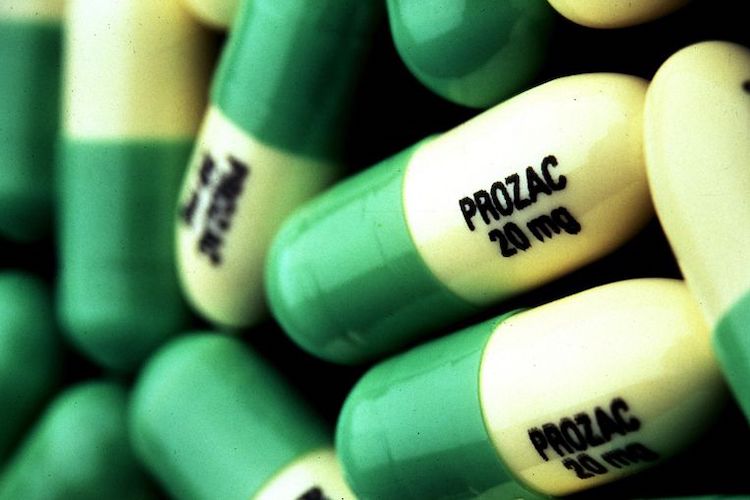 If you were the head of a drug company…

If you had no conscience (the key fact)…

If one of your drugs was causing people to commit murder…

And if the first such trial was convening…

This is the story of a medical drug, a famous drug company, trust, betrayal, and mass murder.

After 30 years, the truth is confirmed—Eli Lilly, the maker of Prozac, secretly paid off plaintiffs in a court case.

The plaintiffs were families of victims killed by a man who went violently crazy after taking Prozac.

The mass shooting took place in 1989, in Kentucky. I covered the case in 1999, by which time the Lilly payoff was an open secret among some lawyers, doctors, and reporters.

But NOW we have confessions from the plaintiffs who took Lilly’s money. In the trial, Eli Lilly was exonerated, absolved of any blame for murders by the jury.

Ahrp.org: “The Louisville Courier Journal reports that thirty years after Joseph Wesbecker went on a deadly shooting rampage in Louisville Kentucky, on September 14, 1989, the families and survivors of his actions have finally come forward to tell the truth. They were plaintiffs in a lawsuit against Eli Lilly because they had reason to believe that Prozac, manufactured by Lilly, had been the trigger that propelled Wesbecker on his violent rampage. Eli Lilly had paid these plaintiffs $20 million in hush money to conceal damaging evidence about Lilly’s culpability in marketing defective, deadly drugs from the jury in the Wesbecker- Eli Lilly trial.”

The Louisville Courier Journal: “On the eve of the jury’s verdict, which absolved Lilly of liability, the company made the secret payment without telling the judge overseeing the case. In exchange for the payment, the plaintiffs – eight estates and 11 survivors – agreed to withhold damaging evidence about the arthritis drug Oraflex that Lilly withdrew from the market. Lilly [had previously] pleaded guilty to 25 criminal misdemeanor counts for failing to report adverse reactions that patients suffered from the drug [Oraflex], and the drug company feared that the Prozac jury would be more inclined to rule against the drugmaker [on Prozac] if it learned of it.”

In other words, the court, which was willing to hear evidence about Lilly’s Oraflex cover-up, never did hear that evidence, which would have alerted the jury that Eli Lilly had a track record of concealing damning truths about its drugs.

AHRP: “Circuit Judge John Potter, the judge in the [Prozac] case, suspected that Lilly bribed plaintiffs and their lawyers before the jury verdict. He uncovered evidence of bribery, and fought Eli Lilly for years but failed to obtain [proof of] the terms of the [Prozac payoff] deal. Lilly succeeded in keeping its criminal action from a judicial proceeding. As is Eli Lilly’s norm and practice; it trashed the judge for his pursuit of the truth.”

The Louisville Courier Journal: “The drugmaker that produces Prozac, the antidepressant that Joseph Wesbecker’s victims blamed for his deadly shooting rampage 30 years ago at Standard Gravure, secretly paid the victims $20 million [in 1994] to help ensure a verdict exonerating the drug company. Indianapolis-based Eli Lilly vigorously shielded the payment for more than two decades, defying a Louisville judge who fought to reveal it because he said it swayed the jury’s verdict.”

“Wesbecker began taking Prozac about a month before his murderous spree that killed eight and wounded 12 in the print shop attached to the Courier Journal. All but one of the victims sued Eli Lilly, the company that manufactured the popular but controversial drug.”

“On Sept. 14, 1989, Wesbecker, a pressman who had been placed on long-term disability leave for severe mental illness, entered Standard Gravure around 8:30 a.m., carrying a bag full of weapons, including a semiautomatic rifle. Over the next 30 minutes, Wesbecker walked through the building, firing more than 40 rounds at those he encountered before shooting himself in the [head] with a handgun. It is the worst mass shooting in Kentucky’s history.”

You need to understand that a diagnosis of “severe mental illness” is a far cry from “killing eight people and wounding 12 people.” The two factors are not automatically connected as cause and effect. If they were, we would see a dozen mass murders every day. That said, according to press reports, Wesbecker did have thoughts about committing violence before he was started on Prozac, and even made threats to commit murder. But he didn’t kill anyone until after taking Prozac. And the charge against Prozac was: it was the chemical trigger that pushed Wesbecker over the edge from thought into horrific action. (In that regard, see the brief collection of studies I cite below.) In any event, no argument about motivations for murder justifies Eli Lilly’s $20 million bribe to the plaintiffs. Lilly wanted an absolute slam dunk in the Wesbecker trial, to protect itself from many other law suits where, no doubt, the role of Prozac in suicide and murder was more vivid.

You also need to understand the status of Prozac in the years leading up to the rigged 1994 trial in Kentucky that falsely exonerated Eli Lilly. I’m talking about media coverage, psychiatric literature, the court system, and the mindset of the public. Prozac was precariously perched on a ledge. Would it gain universal acceptance? Would it be exposed as a gross danger? At the time of the Kentucky court case, there were roughly 100 other law suits against the drug heading toward trial. The outcome of the Kentucky Wesbecker case would send a powerful signal to lawyers and plaintiffs about the odds of winning judgments against Eli Lilly and Prozac. If Lilly were exonerated in Kentucky (and it was, through payoffs), lawyers in other such cases would back off. They would see little point in trying to prove Prozac was a grave danger.

Here is some background about Prozac in those years. It illustrates how great the threat was to Eli Lilly’s blockbuster antidepressant then—and, by comparison, how little any concern is allowed into the public arena now.

On February 7th, 1991, Amy Marcus’ Wall Street Journal article on the drug carried the headline, “Murder Trials Introduce Prozac Defense.” She wrote, “A spate of murder trials in which defendants claim they became violent when they took the antidepressant Prozac are imposing new problems for the drug’s maker, Eli Lilly and Co.”

In his landmark book, Toxic Psychiatry, Dr. Breggin mentions that the Donahue show (Feb. 28, 1991) “put together a group of individuals who had become compulsively self-destructive and murderous after taking Prozac and the clamorous telephone and audience response confirmed the problem.”

Breggin also cites a troubling study from the February 1990 American Journal of Psychiatry (Teicher et al, v.147:207-210) which reports on “six depressed patients, previously free of recent suicidal ideation, who developed intense, violent suicidal preoccupations after 2-7 weeks of fluoxetine [Prozac] treatment. The suicidal preoccupations lasted from three days to three months after termination of the treatment. The report estimates that 3.5 percent of Prozac users were at risk. While denying the validity of the study, Dista Products, a division of Eli Lilly, put out a brochure for doctors dated August 31, 1990, stating that it was adding ‘suicidal ideation’ to the adverse events section of its Prozac product information.”

An earlier study, from the September 1989 Journal of Clinical Psychiatry, by Joseph Lipiniski, Jr., indicates that, in five examined cases, people on Prozac developed what is called akathisia. Symptoms include intense anxiety, inability to sleep, the “jerking of extremities,” and “bicycling in bed or just turning around and around.” Breggin comments that akathisia “may also contribute to the drug’s tendency to cause self-destructive or violent tendencies … Akathisia can become the equivalent of biochemical torture and could possibly tip someone over the edge into self-destructive or violent behavior … The June 1990 Health Newsletter, produced by the Public Citizen Research Group, reports, ‘Akathisia, or symptoms of restlessness, constant pacing, and purposeless movements of the feet and legs, may occur in 10-25 percent of patients on Prozac.’”

There are other studies: “Emergence of self-destructive phenomena in children and adolescents during fluoxetine [Prozac] treatment,” published in the Journal of the American Academy of Child and Adolescent Psychiatry (1991, vol.30), written by RA King, RA Riddle, et al. It reports self-destructive phenomena in 14% (6/42) of children and adolescents (10-17 years old) who had treatment with fluoxetine (Prozac) for obsessive-compulsive disorder.

September, 1991. The Journal of the American Academy of Child and Adolescent Psychiatry. Author Laurence Jerome reports the case of a ten-year old who moves with his family to a new location. Becoming depressed, the boy is put on Prozac by a doctor. The boy is then “hyperactive, agitated … irritable.” He makes a “somewhat grandiose assessment of his own abilities.” Then he calls a stranger on the phone and says he is going to kill him. The Prozac is stopped, and the symptoms disappear.

(What is true about Prozac is true about Paxil or Zoloft or any of the other SSRI antidepressants. And be warned: suddenly withdrawing from any psychiatric drug can be extremely dangerous to the patient. Gradual withdrawal must be done under the supervision of a professional who understands exactly what he/she is doing.)

A final piece of the truth now comes to light in the Wesbecker case.

In this sordid drama, there are many other actors. I’ve covered them in other articles. But I can’t let this article end without mentioning the FDA, the sole federal agency responsible for certifying all medical drugs as safe and effective for public use. That agency went rogue a long, long time ago. It takes no responsibility for launching killer chemicals on the population. It operates as a colluding partner with the pharmaceutical industry. Trusting the FDA to protect people from drugs such as Prozac is like trusting a PR company, hired to promote war, to maintain the peace.

Jon Rappoport is the author of three explosive collections, THE MATRIX REVEALED, EXIT FROM THE MATRIX, and POWER OUTSIDE THE MATRIX, Jon was a candidate for a US Congressional seat in the 29thDistrict of California. He maintains a consulting practice for private clients, the purpose of which is the expansion of personal creative power. Nominated for a Pulitzer Prize, he has worked as an investigative reporter for 30 years, writing articles on politics, medicine, and health for CBS Healthwatch, LA Weekly, Spin Magazine, Stern, and other newspapers and magazines in the US and Europe. Jon has delivered lectures and seminars on global politics, health, logic, and creative power to audiences around the world. You can sign up for his free emails at NoMoreFakeNews.com or OutsideTheRealityMachine.

Democrat Caught on Video Teaching Illegals How to Vote
January 26th, 2020 The Lid

Coronavirus and the Dangers of Fake News – Someone is Lying to You
January 26th, 2020 DC Clothesline

Coronavirus and the Dangers of Fake News – Someone is Lying...