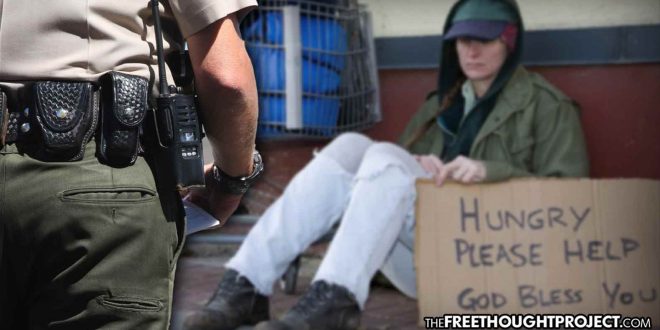 Bakersfield, CA — There is no doubt that California is experiencing a homeless crisis. In certain parts of the state, the homeless problem has turned into a public health issue as well, as many homeless people struggling with addiction have resorted to using public sidewalks as personal toilets. But the only solution that government seems to want offer is more police state. Officials in Bakersfield just announced that they will be solving their homeless problem by throwing people in jail.

Under the plan, homeless people would be rounded up under the ostensible charges of misdemeanor drug offenses or potential trespassing and thrown in a cage. While this idea may appear ridiculous to those who can think outside of the police state, when your only tool is a hammer, everything, even innocent people down on their luck, begin to look like nails.

As the LA Times reports, this tactic would fly in the face of criminal justice reform over the last decade in California, as the state has leaned away from incarceration for low-level, nonviolent drug crimes. It also would counter mainstream thinking on preventing homelessness and addressing the reality of it.

According to the report, the plan is being spearheaded by Kern County Sheriff Donny Youngblood and Kern County Dist. Atty. Cynthia Zimmer. And, it has a lot of support.

Naturally, many of the advocates of such a program are ignoring the insane costs of incarcerating thousands of people for “trespassing” or “drug possession.” Sadly, almost no one opposes it.

“The pressure from the public is enormous,” Youngblood said. “When I say that the people in San Francisco and Los Angeles are fed up and they care about this issue, it’s 10 times that in my county.”

While Youngblood said he wants to go after those who are possessing drugs, Zimmer is adamant about kidnapping and caging people for trespassing. Exactly how authorities will determine someone is a homeless trespasser remains up for debate, however.

The idea of using the criminal justice system to attempt to solve a homeless problem has been on the rise in California. As TFTP reported in July, Orange County announced that they will begin arresting people for being homeless in the wrong part of town. As stated above, exactly how they will know a person is homeless, remains unclear.

According to a report from Fox 11:

The Orange County Board of Supervisors settled two federal lawsuits filed last year aimed at efforts to clear out hundreds of homeless people who were camped out along the Santa Ana riverbed near Angel Stadium, Los Angeles’s Fox 11 reported.

According to the settlement, two provisions have been established to remove homeless people from the streets. In some areas, cops will immediately arrest people for being homeless. In other areas, however, police will have to first tell the homeless person that they have the option of being forced to go to a shelter. If the person refuses the shelter, then police will arrest them.

It appears that instead of addressing the problem of homelessness with actual solutions like the construction of tiny homes or rehabilitation centers, authorities have turned to the police state. What’s more, the state not only goes after the homeless, but they go after those who try to help them as well.

In the land of the free, government and law enforcement not only wage war on the poor and homeless through various unscrupulous means designed to extract revenue and attack the right to exist, like this ordinance does, but those who try to help the homeless—by feeding, clothing, or sheltering them—also face the wrath of the state. As TFTP has reported, even those who’ve laid down their lives for the state—veterans—and the ones who help them are now being targeted.

Judy Wu, a landlord in San Francisco converted 12 properties she owns into 49 housing units over the last decade which she and her husband, Trent Zhu, rented to homeless, low-income and disabled veterans.

Because they’ve split the units into much smaller ones, the couple is able to provide these veterans with very cheap housing. However, city officials claimed the property was not zoned for this many homes, so they shut down the operation.

One of the most oft repeated phrases by those who advocate for the arrest and mistreatment of homeless people is, “why don’t you let them live in your house?” But many folks actually do try to take in homeless people to help them get back on their feet — an act many governments consider unlawful.

TFTP has reported on countless instances in which good Samaritans have been fined or threatened with arrest for taking in those in need. In some cases, churches who let homeless families live on their property, have been shut down and the pastors threatened with jail.

As stateless solutions rise up to fix the problem of homelessness — without costing the taxpayer a dime — the state comes in to thwart them. And, as this ordinance enforcement illustrates, the only solution that state proposes to replace it is force. If police violence against the homeless — without this law — is any indicator, the enforcement of this ordinance will not end well.

As TFTP reported last month, however, at least one state is proposing a viable solution to their homeless problem. The Bridge to Work program started in April in Little Rock, Arkansas and pays homeless individuals $9.25 an hour to pick up trash and clean the capitol city of the state.

Canvas Community Church runs the program which was only slated to last 6 months. But Mayor Frank Scott Jr. told reporters that it’s been so successful that he is going to extend the program for another year.

Lifestyles of the Poor and Homeless: California Edition…