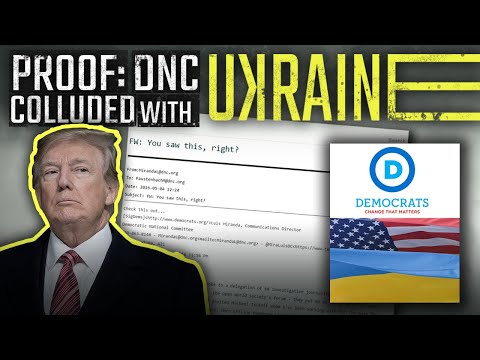 Did Democrats really think that playing the Ukraine card would do them any good at all?

More and more information is coming out that the Democrats were the ones trying to use Ukraine connections to their advantage and the latest revelation is huge.

A Ukrainian official has admitted that he was working for Team Hillary in 2016 and not Team Trump.

This is a big controversy in Ukraine that we conveniently don’t hear about from our crooked media in the U.S.

Glenn Beck has just released an audiotape of the former Director of the National Anti-Corruption Bureau of Ukraine (NABU), Artem Sytnyk, admitting he “helped” Hillary during the 2016 U.S. presidential election. Sytnyk was convicted for election interference in December 2018 in Kiev. The court ruled that the publication of the “black ledger” documents “led to interference in the electoral processes of the United States in 2016 and harmed the interests of Ukraine as a state.”

Here is the video/audio courtesy of The Blaze.

If you are rushed for time, fast forward to the 4 minute mark. The pertinent questions and comments start at the 4;10 mark:

Here is a transcript courtesy of RedState:

Kolya: Did they, those Russians, help Trump? Your people?

Sytnyk: I think they did. Yeah. I helped him, too. Not him, but Hillary. I helped her.

Sytnyk: Well, this is how they write about it, right.

Kolya: Well, I’m about … the commentaries. At the time, we were not [indiscernible.]

Sytnyk: Trump … his purely inner problem … issue … they dominate over the external matters. While Hillary, she is — how shall I put it? She belongs to the cohort of politicians who comprise the hegemony in the US. Both in the US and the entire world, right? For us, it’s … sort of … better. For Americans … what Trump is doing is better for them.

Kolya: Well, we have lots of those American experts here now … [indiscernible.]

Sytnyk: Well, there, you see why Hillary lost the elections? I was in charge of the investigation of their “black accounting” records. We made the Manafort’s data available to general public.

Sytnyk: He was imprisoned. Manafort then was the head of the Supreme Headquarter of Trump, right? Then he was dismissed, too, including due to the “black accounting.” After that, he was sentenced to 80 years of imprisonment term. How about Trump? Did he not give a s***. They have their system working there and it works smoothly.

Kolya: Everybody worked smoothly there.

Sytnyk: And when they carried out the elections, a week before the elections, the FBI reopened the investigation in respect of Hillary. So her rating dropped for 7 percent and that’s why Trump managed to win the elections at a pinch.

I’m still unable to understand why he’s fighting with the FBI. They try to catch him on the hand. If it were not the FBI, he would not have won the elections. They torpedoed Hillary’s ratings for 7 percent.

Who is Artem Sytnyk?

From the National Anti-Corruption Bureau of Ukraine:

Director of the National Anti-corruption Bureau of Ukraine

Artem Sytnyk was born on 19 August 1979 in Kompaniyivka, Kirovohrad region. Married, has a son and a daughter.

Artem Sytnyk started his career in 2001 as a district attorney assistant of Leninskiy district, Kirovohrad. In October 2001 he was reassigned and became investigator.

In August 2011 Artem Sytnyk resigned because of his objections to policies of the Yanukovych regime, criminalisation of law enforcement agencies, rollback in the fight against corruption, total incompetence and political bias imposed by the Kyiv regional Prosecutor general of that time.

In January 2015, due to the absence of progress in the sphere of fighting corruption, Artem Sytnyk decided to participate in the open competition for the position of Director of the National Anti-Corruption Bureau of Ukraine.

This is not some insignificant Ukrainian politician laying these accusations on Hillary.

This is a very important man in the Ukraine.

Make no mistake, this will go all the way up to Obama if anyone dares trace it that far.

Have we forgotten that Obama helped install a Neo-Nazi regime in Ukraine during his second term?

The prospect of Obama being dragged into this, or even Hillary, might be slim and none.

But Americans still need to know the truth.

The Democrats were the guilty party in shady dealings with Ukraine, not President Trump.