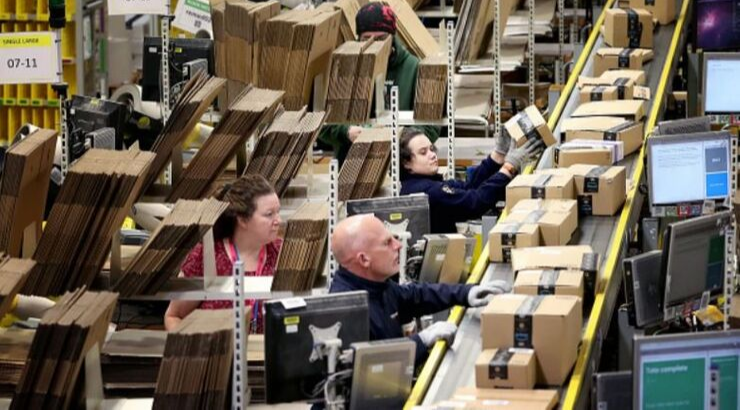 Employees of an Amazon delivery location in Sacramento, California are protesting the company’s decision to fire a worker who missed an hour of work for a bedside vigil with her dying mother-in-law, even though she communicated with her managers and gave them advanced notice.

Last week, other workers at the Sacramento delivery location organized to present their supervisors with a petition challenging the decision.

The employee, who was identified only as “Sandra,” was fired for taking too much time off from work. Amazon has a very complex time system that tracks every moment that an employee is on the clock and holds them accountable for every 5-minute infraction. Workers insist that the process is automated and controlled by AI, but Amazon denies these claims.

When she was fired, Sandra’s boss told her that she had gone over her time by one hour when she visited her mother-in-law.

“I felt like I was in The Twilight Zone. I’m dealing with a death in my family, and I’m going to lose my job over one hour?” Sandra told the Verge.

The petition demands that the company give Sandra her job back, in addition to more time off for all employees.

While Amazon is a trillion dollar company run by the richest man in the world, permanent part-time employees working 8 hour shifts are only allowed 10 days off a year for any reason. This means that every day we use [unpaid time off] for family emergencies, sickness, or vacation, we are one step closer to termination.

Because a large portion of Amazon’s workforce are technically part-time employees, they do not receive paid time off or medical benefits. This is typically not the choice of the employees, who are required to work fewer hours so they do not meet the minimum threshold for receiving the aforementioned benefits.

In a later statement responding to the protests, Amazon said that they take “individual circumstances into account,” and insisted that firings at the company are not automatic, which is what numerous employees have suggested.

However, the company has refused to comment on Sandra’s individual case, saying only that,

Amazon maintains an open-door policy that encourages employees to bring their comments, questions, and concerns directly to their management team for discussion and resolution. We have a long standing policy of not commenting on personnel matters.

“Unpaid time off” is a huge source of stress for Amazon employees, and is something that is relatively unique to this company. Taking scheduled days off, or asking for changes in schedules or coverage in shifts, is typical across all industries, and this is usually an informal process that is worked out as a personal agreement between workers and employers on a case-by-case basis. However, Amazon has formalized this process and is keeping a permanent record of every single day that a person takes off, even if they are a part-time employee that is not paid for their time off. When an employee reaches a minimum threshold of unpaid days off, they can be fired without question.