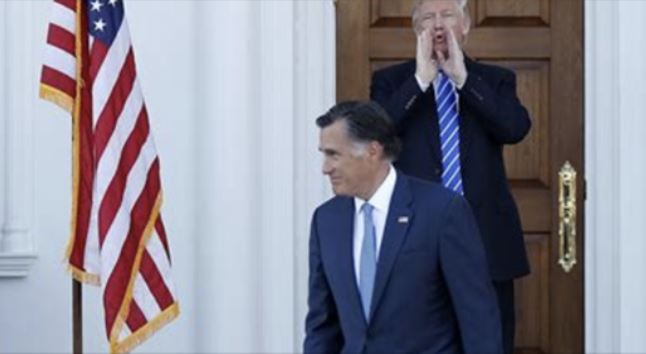 Op Ed: Mark Sidney – I knew it!  Mitt, ‘Can I Please Be The Next John McCain’ Romney, is reportedly considering primarying Trump.

Let me give you a min to stop laughing, wipe the coffee you spit on your screen off, and collect yourself.  Yes, you read that right, Mitt Romney apparently thinks that he can beat Trump in a primary.

‘The Donald’ has a 94% approval rating amongst Republicans according to President Trump:

In the spirit of …well, to avoid the ‘fact checkers’ telling me that Trump approval rating amongst Republicans is not 94% like Trump claimed, here is a Vox article (yeah, I know, I’m not a big fan either) claiming Trump is wrong (imagine my shock upon learning they said Trump is lying) which cites a Monmouth University poll suggesting the number is 84%.  Wow, 84% that’s terrible … lol, oh Vox, SMH.

I would love to know what Mitt’s approval rating is among conservatives.  One thing I would bet is that, as low as it likely is before he announces his candidacy, it will likely be 10-20 points lower (if he even started with 20% approval among Republicans) if he does in fact primary Trump.

However, I do not think that matters to Mitt.  I do not think that, if Mitt does announce, he will be doing so in order to win. Romney, in my view, is a loser, a fall guy.  I would not be surprised if he knew he was going to lose to Obama and just tried to make it ‘look good’ in 2012.

I think the REAL reason Romney would challenge Trump is to gain the opportunity to try to embarrass, and sling dirt, at Trump in a televised debate, in an effort to hand the election to the authoritarians, errr Democrats.  There is one flaw in this plan however, Trump will mop the floor with the Mitt, ‘white shoe boy’ as the great Gerald Celente of Trends Research Institute would say.

So here is the report we are talking about from HotAir:

Romney has re-emerged, as he does occasionally, to be the self-appointed voice of morality. He slammed President Trump’s behavior during the phone call to Ukraine’s President Zelensky as “wrong and appalling”.

By all appearances, the President’s brazen and unprecedented appeal to China and to Ukraine to investigate Joe Biden is wrong and appalling.

…While Romney is clutching his pearls over Trump’s phone call, I haven’t seen a tweet criticizing Rep. Adam Schiff for lying about contact with the whistleblower who filed the complaint that opened up the investigation into the phone call. Even the Washington Post gave that four Pinocchios. That’s the problem with Romney – he’s too busy criticizing a Republican president to criticize Democrats. He was the first one out of the gate to jab at Trump on Twitter. Romney knew it would get a response.

There was some chatter that Romney is quietly taking the pulse of GOP donors.

As if you needed another reason to oppose the man who gave Massachusetts ‘Romneycare’, the man who could not even beat Obama in 2012, look who else is supporting him, the turncoat opportunist, Anthony Scaramucci.

If he ran he would win@MittRomney over the traitor @realDonaldTrump

Romney would get eaten alive by Trump in a debate, I think it would be a great opportunity for Trump to even further distance himself from the ‘Democrat lite’ wing of the party and allow Trump to further position himself as the anti-establishment candidate.

I do not want to give the globalists any advice, but I keep wondering when they will realize that opposing Trump will never destroy him, as no one, on this side of the isle at least, respects them.  The only way for the power structure to destroy Trump would be to embrace him.

BTW … have you signed up for Spreely yet?  Spreely.com is the social network where the 1st Amendment is the community standard.