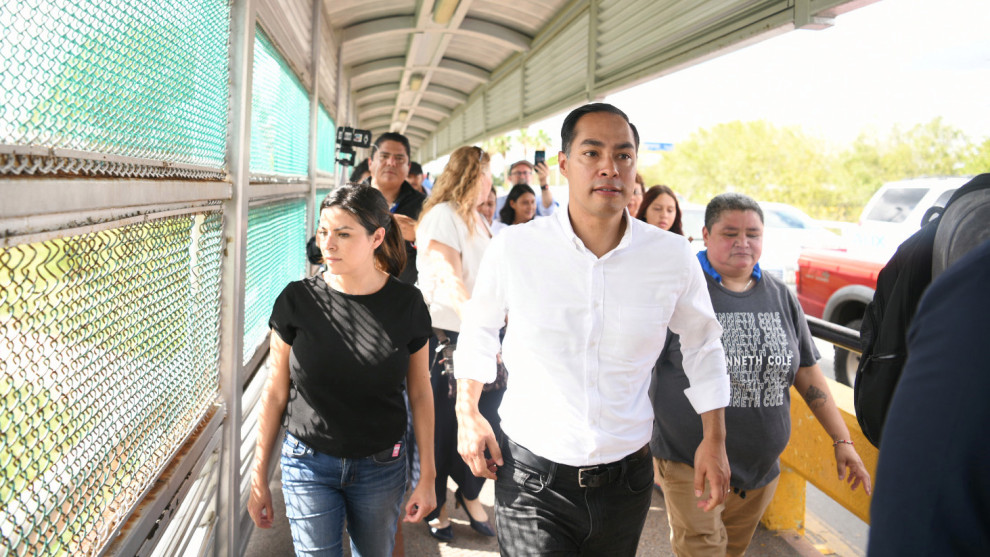 Presidential candidate Julián Castro on Monday escorted a group of asylum seekers across the border bridge to his native Texas from Mexico, where they had been sent under the Trump administration’s “Remain in Mexico” policy.

Walking across the bridge with Castro were eight gay and lesbian asylum seekers from Cuba, Guatemala and Honduras, as well as a deaf Salvadoran woman and her three relatives. All had earlier tried to cross here with a lawyer after being returned to Mexico to await court hearings, and all had been sent back by U.S. Customs officers. Some had already waited four months.

The asylum seekers said they knew they were taking a risk: They could be returned to Mexico or placed in long-term detention.

“Ten years in detention is better than a day here,” said Dany, 22, a lesbian who fled Cuba with her partner and asked, like the others, to be identified by only her first name since her immigration case is pending.

Dany said she decided to join Castro on the bridge to show the U.S. “how they’re breaking the law here.” She said Remain in Mexico was a “trick by Donald Trump.”

“The U.S. doesn’t want any migrants,” she said.

More than 50,000 asylum seekers have been sent to Mexico to await the outcome of their U.S. immigration court cases since the Migrant Protection Protocols, known as Remain in Mexico, began in January. U.S. Customs and Border Protection officials initially said “vulnerable” migrants would be exempted from the program. But scores of LGBTQ, disabled and pregnant asylum seekers have still been returned to Mexico.

Dany and other LGBTQ asylum seekers said that while they waited in Mexico they had been threatened and intimidated for being gay. Melisa, a 27-year-old from Honduras, said she was hit in the face by a stranger as she stood talking to friends outside a nearby pharmacy. Even at the migrant camp by the bridge, people sometimes called them names, said Dany’s partner, Mari, 24.

“The same people who are living with us discriminate against us,” she said.

When the group entered the bridge, some of the asylum seekers were crying, nervous. At the bridge’s midpoint, U.S. Customs officials stopped them and they waited briefly for a supervisor, who arrived and took them across.

It wasn’t clear at that point whether they would be returned to Mexico, but some were relieved to at least have a chance to speak with officials. “I don’t ever want to go back,” Melisa said.

In addition to the abuse that members of the LGBTQ community said they faced while waiting for their cases to be heard, other dangers face those trapped in border towns under Remain in Mexico. Asylum seekers who were returned under the policy reported 340 violent attacks last month — including rape, kidnapping and torture — according to a report by the nonprofit Human Rights First. That’s up from 110 such crimes reported in August, the report found.

Late last month, the Department of Homeland Security set up courts in large white tents next to the border bridges to Matamoros and Nuevo Laredo to hear Remain in Mexico cases. The department barred public access and has required migrants to show up before dawn for hearings. Some migrants said they were kidnapped while traveling in the dark to court last month. Others have left Mexico before their court hearings, returning home on free flights and buses south provided by the Mexican government and the United Nations-affiliated International Organization for Migration.

In addition to the asylum seekers returned to Mexico to await their hearings, more than 26,000 are on waiting lists to enter U.S. border crossings and claim asylum, according to Human Rights Watch. Many on the lists are from Central America, but in recent weeks, large groups have been arriving from rural areas of Mexico’s interior, fleeing increased drug cartel violence.

The camp at the foot of the bridge in Matamoros has grown to hold more than a thousand migrants, most camped in scores of tents. Many had children and babies, and meals and water were sporadic, provided by volunteers.

“This Remain in Mexico program is a complete disaster,” Castro said after touring the camp next to the Rio Grande, where he saw migrants bathing near half a dozen crosses honoring those who drowned this summer while trying to make the dangerous crossing. “People should not be living like this.”

As Castro left the river, migrants standing in the reeds called to him in Spanish:

“Our children are sick!” said one man.

“We’ve been here for months!” said another.

“Our next court date isn’t until January!” said a woman.

Castro, who served as Housing and Urban Development secretary and San Antonio mayor, isn’t the first candidate to join asylum seekers at the border. In late June, former U.S. Rep. Beto O’Rourke of Texas met with migrants returned to Mexico at a shelter in Juarez. Days later, New Jersey Sen. Cory Booker accompanied five pregnant women in the Remain in Mexico program across the bridge from Juarez to El Paso.

Castro called on the Trump administration to end the Remain in Mexico policy, noting that he had met several vulnerable migrants who should not have been returned, including a woman who was seven months pregnant.

“This president has helped create a humanitarian crisis,” he said. “… People are living in squalor.”

By 5 p.m., all 12 asylum seekers who had crossed with Castro had been returned to Mexico.

“I feel so defeated,” said Rey, a 35-year-old Cuban who had joined the group only to find himself back in Matamoros by evening.

Dany was upset when she was returned to the camp at dusk. As migrants gathered, she told them that the U.S. official who had interviewed her by phone had been unsympathetic.

“I told him I was in danger in Matamoros. That didn’t matter to him,” she said. “There’s no asylum for anyone … the system is designed to end with us leaving.”

Not to be Outdone…