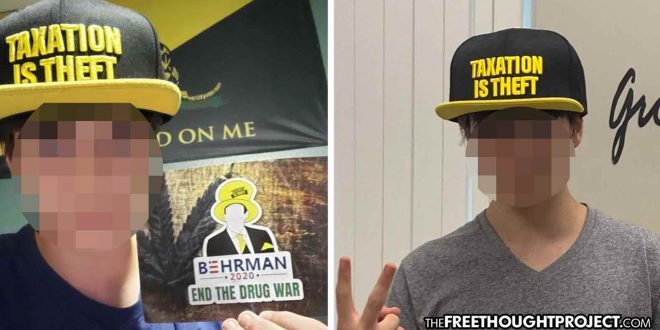 “It is, in fact, nothing short of a miracle that the modern methods of education have not yet entirely strangled the holy curiosity of inquiry; for this delicate plant, aside from stimulation, stands mainly in need of freedom; without this it goes to wrack and ruin without fail. It is a very grave mistake to think that the enjoyment of seeing and searching can be promoted by means of coercion and a sense of duty.” –Albert Einstein

Standard education in America typically focuses on creating a supply of worker bees who follow orders from authority and operate within the confines that the system has set out, but lack critical thinking skills. The results of such a school system which suppresses and discourages creativity and imagination has had a detrimental effect on children and their ability to question the status quo. But what happens when one of those children shatters the paradigm and can see outside these walls? Well, for one high school freshman in Florida, it got him suspended for five days.

The student, whose mother asked us not to name him, was suspended last week and will remain suspended through the end of the week. His violation? He wore a hat that read “Taxation is theft” across the front and handed out flyers for a libertarian presidential candidate who advocates “ending the drug war.”

Neither of these statements are threatening, obscene, or otherwise illegal, yet on Friday, the student, who we will refer to E, was approached by school staff members for wearing this hat. E tells us that he was wearing his hat at a time and place in which students are allowed to wear hats, but possibly due to the words on the hat, he was targeted.

“The administration claimed that I can’t wear hats outside, when it actually says in the Florida Constitution that students can in fact wear hats or other headgear outside,” E told the Free Thought Project.

But this was just the beginning.

When E began to hand out flyers for 2020 presidential candidate Dan Behrman — who advocates for ending the drug war and that taxation is theft — all hell broke loose.

E quickly found himself surrounded by school staff who he says attempted to detain him for handing out the flyers. “I tried to leave the cafeteria when I was told I wasn’t being detained, and I only stayed because I was followed, harassed, and coerced into doing so,” he said.

A deputy would then get involved and told the school administrators that E was filming them.

“They got the deputy involved the first time because I started recording,” E said. “The deputy was nearby when they confronted me for handing out the flyers. And then the deputy walked up to us and was like ‘I’d like to let you know that he might be recording you without your knowledge.’”

“I was suspended out of school for five days for the flyers and refusing to turn them in and being skeptical of their claims of what the rules are,” said E. “They lied to me about the hat rule, so I was thinking that they might be lying again. They didn’t allow the opportunity for me to look up the rule because they knew that they could have possibly been wrong.”

E gave us a copy of his suspension letter which states that he was suspended for “Disobedience/Insubordination.” He is not allowed to return to school until Monday.

The Free Thought Project contacted the school district on Monday to inquire about E’s suspension but as of the publishing of this article, we have not received a response.

When expressing peaceful opinions on taxation and the war on drugs gets you kicked out of school for five days for “insubordination,” it may be time to bring the mission of public education into question. The public school system has become little more than an indoctrination center that teaches kids what to think instead of how to think and E’s suspension highlights this perfectly.

What’s more, taxation is theft, so no one should ever be punished for wearing a hat that says this.

“Taxation is theft, purely and simply even though it is theft on a grand and colossal scale which no acknowledged criminals could hope to match. It is a compulsory seizure of the property of the State’s inhabitants, or subjects.” ― Murray N. Rothbard

If you are confused by the phrase “taxation is theft,” just think of the government as people without any special privileges. If an average person takes money from someone under the threat of force it is called robbery. However, if the government does it, then it is considered legal and moral, and is called “taxation.” No one actually ever agreed to this arrangement, it has been forced on millions of people against their will, and a long list of justifications have been created to convince people that they are not being stolen from.

Since the government is allowed to extract money from its citizens via the barrel of a gun, this guarantees that they will have funding for any kind of project they want, even if those projects are unpopular with taxpayers like war and the police/surveillance state. This is because the public has no choice but to pay taxes, therefore they have no say in how their money is used and are typically forced into paying for their own oppression and the slaughtering of their neighbors in foreign countries.

Sure, there are some social welfare programs that do benefit some people, but the money that these projects cost is but a tiny fraction of the money that is actually received from taxation. Most of the money that is brought in through taxes is used for bureaucratic budgets, collection enforcement, and the gluttony of federal and state governments.

So, while a portion of the revenue is being used for beneficial projects, a majority of the money is still being wasted or used for nefarious means. Some researchers have described this as a thief giving you five dollars, while at the same time taking a hundred dollars from your back pocket.

There is an unbelievable amount of fear directed at this concept because for so long, our civilizations have been propelled by violence instead of rationality. Immediately upon hearing about these ideas of doing away with coercive taxation, many people who are new to the idea will immediately scoff, “if taxes were not collected under threat of force then no one will pay them and there will be chaos and the poor will die in the streets.” Or, they may suspend students for wearing hats in school that spell this out.

This statement shows that taxation isn’t working for the average person. Therefore, ideas about “the consent of the governed” and “the social contract” are complete fallacies. If someone explicitly states that people wouldn’t pay taxes if they weren’t mandatory, they are then admitting that tax revenue is not used to benefit the public and that no one would pay if they didn’t have a—proverbial and sometimes real—gun to their head.

When a need arises in a community, people naturally come together and take care of what needs to be done; they don’t need someone with a gun in their face telling them how to do it. For our species to have any chance on this earth, we must start thinking about more peaceful ways of going about things, and stop justifying the use of violence in all circumstances, even soft-core violence like legislation, taxation, and indoctrination via public schools.