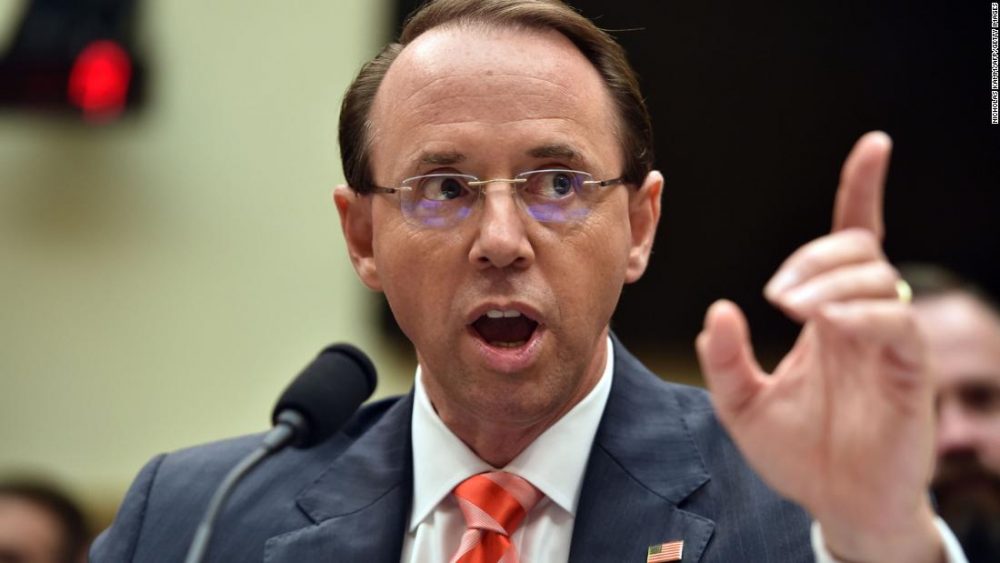 Rod Rosenstein, who was once a deputy attorney general, is a key figure in enabling, at a minimum, the Deep State’s seditious attacks on President Trump.

More proof is in new documents uncovered by a Judicial Watch lawsuit. Specifically, we forced the release of 145 pages of Rosenstein’s communications that include a one-line email from Rosenstein to Mueller stating, “The boss and his staff do not know about our discussions.” They also include “off the record” emails with major media outlets around the date of Mueller’s appointment.

Any and all e-mails, text messages, or other records of communication addressed to or received by Deputy Attorney General Rod Rosenstein between May 8, 2017, and May 22, 2017.

The time period referred to in this suit is critical. On May 9, 2017, Rosenstein wrote a memo to President Trump recommending that FBI Director James Comey be fired. That day, President Trump fired Comey. Just three days later, on May 12, Rosenstein sent an email assuring Robert Mueller that, “The boss and his staff do not know about our discussions.” (It is not clear if the “boss” is then-AG Sessions or President Trump.)

In a May 16, 2017, email, sent the day before Mueller’s appointment, Rosenstein emailed former Bush administration Deputy Attorney General and current Kirkland & Ellis Partner Mark Filip stating, “I am with Mueller. He shares my views. Duty Calls. Sometimes the moment chooses us.”

The next day, May 17, Rosenstein appointed former FBI Director Robert Mueller to investigate Russian meddling in the 2016 presidential election.

During the same period, between May 8 and May 17, Rosenstein met with then-acting FBI Director Andrew McCabe and other senior Justice Department FBI officials to discuss wearing a wire and invoking the 25th Amendment to remove President Trump.

The documents also show that, again during the same time period, Rod Rosenstein was in direct communication with reporters from 60 Minutes, The New York Times and The Washington Post. In an email exchange dated May 2017, Rosenstein communicated with New York Times reporter Rebecca Ruiz to provide background for this article about himself. Ruiz emailed Rosenstein a draft of the article, and he responded with off-the-record comments and clarifications.

Rosenstein: “Off the record: This special counsel is a DOJ employee. His status is similar to a US Attorney.”

Davis: “Good call on Mueller. Although I obviously thought you’d be great at leading the investigation too.”

On May 17, 2017, in an email exchange with Washington Post journalist Sari Horwitz with the subject line “Special Counsel,” Rosenstein and Horwitz exchanged:

Rosenstein: “At some point, I owe you a long story. But this is not the right time for me to talk to anybody.”

Horwitz: “Now, I see why you couldn’t talk today! Obviously, we’re writing a big story about this Is there any chance I could talk to you on background about your decision?”

Here’s some more background on the incredible finds from this one Judicial Watch lawsuit.

On September 11, we released 14 pages of records from the Department of Justice showing officials’ efforts in responding to media inquiries about DOJ/FBI talks allegedly invoking the 25th Amendment to “remove” President Donald Trump from office and former Deputy Attorney General Rod Rosenstein offering to wear a “wire” to record his conversations with the president.

On September 23, we released a two-page memo, dated May 16, 2017, by then-Acting FBI Director Andrew McCabe detailing how then-Deputy Attorney General Rod Rosenstein proposed wearing a wire into the Oval Office “to collect additional evidence on the president’s true intentions.” McCabe writes that Rosenstein said he thought it was possible because “he was not searched when he entered the White House.”

As the “coup” targeting President Trump continues through the House impeachment abuse, it is important to remember that its origins are in the Deep State agencies – especially the FBI and DOJ.