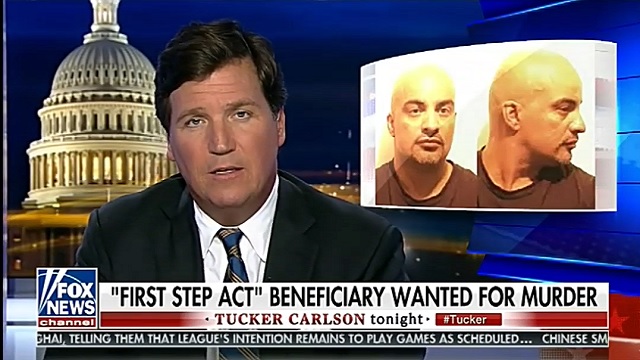 Tucker Carlson reported Wednesday night on how the leader of the “Almighty Latin Kings” street gang, 41-year-old Joel “Joey Crack” Francisco, was freed under the Kushner-Koch “First Step Act” only to go on to allegedly brutally stab a man to death in Rhode Island.

Florida Sheriff calls out Jared Kushner & many Republicans and Democrats for misleading the American people and the President on this bill. pic.twitter.com/I59031jfWb

“Jared Kushner was the one that masterminded and pushed this legislation through,” Polk County Sheriff Grady Judd, who vehemently opposed the bill from the start, told Carlson. From the Providence Journal, “He was released early from prison in February. Now he’s wanted for a murder on Federal Hill.”:

Providence’s deputy police chief warned about Joel Francisco’s ‘propensity for violence,’ but under the Fair Sentencing Act — an attempt to reconcile the gap between sentences for cocaine and crack — Francisco, regarded as crown prince of the Almighty Latin Kings in 2005, shed his life sentence and walked free. Now he’s on the run.

PROVIDENCE — A notorious crack dealer and onetime gang leader released from a life sentence this year under federal drug-sentencing reforms is now accused of fatally stabbing a man on Federal Hill.

Police are searching for Joel Francisco, 41, on an arrest warrant in the death of Troy Pine, 46.

Police said Pine, of Providence, was stabbed to death Wednesday night inside the Nara Lounge, a hookah lounge on Atwells Avenue.

Francisco, who authorities called the crown prince of the Almighty Latin Kings in 2005, was sentenced to life in prison for trafficking crack cocaine. But he was released from federal prison in February, after President Donald Trump signed the First Step Act, a criminal justice reform law.

As I noted last month citing a report from Politico, President Trump is allegedly upset with Kushner over the bill and thinks it was “a total dud.”

As I said at the time, releasing a bunch of felons so the Koch brothers and Jared Kushner’s criminal pals like Sholom Rubashkin could get more cheap labor probably wasn’t the greatest idea.

Bringing Jared Kushner and Ivanka into the White House was the worst mistake Trump ever made and he and the country are already paying dearly for it.