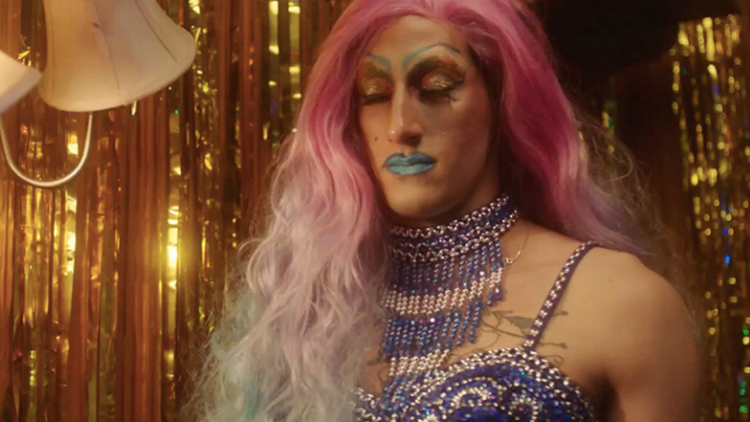 Here is an attempt to shore up the Leftist/Islamic alliance: a “Muslim drag queen” named Amrou Al-Kadhi, also known as “Glamrou,” writes in Vice magazine: “Prophet Muhammed once said, ‘Islam began as something strange and will return to being something strange, so give blessings to those who are strange.’ Amen Muhammed! ” What’s really strange about this is that al-Kadhi apparently wrote it, and Vice published it, with a straight face.

What Amrou al-Kadhi and Vice should find strange, but say nothing about, probably because they’re well aware by now that to call attention to such things among Leftists is “Islamophobic,” is that Muhammad is also depicted as saying this: “The Messenger of Allah (peace and blessings of Allah be upon him) said, ‘Whoever you find doing the action of the people of Loot, execute the one who does it and the one to whom it is done.’” (Sunan Abu Dawud 4462)

Also, the Qur’an contains numerous condemnations of homosexual activity: “And [We had sent] Lot when he said to his people, ‘Do you commit such immorality as no one has preceded you with from among the worlds? Indeed, you approach men with desire, instead of women. Rather, you are a transgressing people.’…And We rained upon them a rain [of stones]. Then see how was the end of the criminals.” (Qur’an 7:80-84)

Amrou Al-Kadhi doesn’t mention any of this in his Vice magazine piece. It doesn’t fit his narrative. But unfortunately for him, many of his coreligionists are well aware of these passages and others like them. The ones who are unaware of them and their implications are gay rights activists in the West. Case in point: back in 2013, when Pamela Geller’s American Freedom Defense Initiative (AFDI), of which I am Vice President, ran ads on buses in San Francisco highlighting the mistreatment of gays in Islamic law, gay advocates in San Francisco and elsewhere condemned not that mistreatment, but our ads.

Theresa Sparks, a transgender who was the chief of San Francisco’s Human Rights Commission, declared that Geller was “posting these ads to suggest that all Muslims hate gays. Some cultures do discriminate, and that’s wrong. It all depends who you’re talking to. But she’s trying to generalize and cast this wide net around a diverse group of people.”

The ads actually consisted simply of quotes from Muslim leaders regarding Islam’s death penalty for homosexuality, including Sheikh Yusuf al-Qaradawi, the most influential Sunni cleric in the world, and Mahmoud Ahmadinejad, former President of the foremost Shi’ite entity in the world, the Islamic Republic of Iran. The ads neither stated nor suggested that “all Muslims hate gays.” Sparks was not reported as saying anything about the anti-gay statements of the Muslim leaders quoted in the ads.

The San Francisco Examiner added: “Sparks, who is transgender, said it’s actually easier to get insurance for sexual transition procedures in Iran than in America.” Sparks was understating the case; the Iranian government will actually foot the bill for gender reassignment surgery itself. But the Islamic Republic of Iran is hardly the bastion of enlightened attitudes toward gays and transgenders that Sparks was implying. Sparks didn’t mention the fact that Iran forces gays to undergo gender reassignment surgery, whether they want to or not, as a “cure” for homosexuality. An Iranian-born filmmaker, Tanaz Eshaghian, pointed out “the pressure felt by gay men and women in Iran to have sexual reassignment surgeries as a means of legitimizing their sexual orientation. As gay individuals, they are committing a crime. As transsexuals, they can exist under Iranian law.”

None of that seemed to register with gay activists such as “Glamrou” or their supporters, such as Vice. Chris Stedman, a proclaimed atheist who is Assistant Humanist Chaplain at Harvard, published an article in Salon.com entitled “Stop trying to split gays and Muslims,” also attacking our ads. Noting with indignation the AFDI “series of anti-Muslim advertisements in San Francisco quoting Muslim individuals making anti-LGBT statements,” Stedman declared his “appreciation that the LGBT community in San Francisco is standing up against her efforts to drive a wedge between LGBT folks and Muslims.”

The same thing happened in April 2017, when I appeared at the University at Buffalo. I say I “appeared,” because to say “I spoke” would be exaggerating a bit. Rather, I spoke a few sentences and made a couple of points in between being screamed at by Leftist and Islamic supremacist fascists who think they’re opposing fascism. One young man held a sign that read “Queers Against Islamophobia.”

The crowd booed energetically when I attempted to read from Islamic authorities about Islam’s death penalty for homosexuality. Even to read from Islamic sources is hate, apparently, at the University at Buffalo – unless, of course, one endorses such penalties rather than oppose them.

Other gays also stand in solidarity with Muslims against Islamophobes. In April 2017, the College Republicans chapter at Truman State University in Kirksville, Missouri, invited me to speak there. Eight days before the event, this invitation came to the attention of a young Kirksville resident who called himself Bella Waddle.

Waddle tweeted: “Truman’s College Repubs are hosting anti-Muslim extremist Robert Spencer on the 13th. I think y’all know what to do… #bashthefash,” followed by an emoji of a fist. Someone identified on Twitter only as Sarah got the point immediately and tweeted in reply: “PUNCH! HIS! FACE!”

Bella Waddle himself was determined to show defiance, tweeting several days before the event: “We’re organizing to make sure he knows he isn’t welcome here. And apparently he’s heard about it.”

Yes, Bella, I did hear about it. And I can assure you that I knew from the outset that I would not be welcome at Truman State University, except by those who invited me and others who supported them.

But your opposition, Bella, and your organizing, raised a few questions that remain important long after my appearance at Truman State.

Bella Waddle identified himself on her Facebook page as “Just another queer anarchist,” ending his Facebook bio with three symbols that were far more incompatible than Bella appeared to know: the hammer and sickle, the peace sign, and a heart. On Bella’s Vine page, Waddle identified himself as Jordan Waddle; the page featured photographs of a male who was clearly the same person as Bella, sans flowing wig, lipstick, and woman’s clothing, and who told us that the pronouns he prefers that people use of him are “she” and “her.” In an earlier tweet, Bella explained: “When my parents tried to turn me into a heterosexual I don’t think they expected me to become a heterosexual woman but here we are.”

So this self-described “queer anarchist” thought of me as an “anti-Muslim extremist” who ought not to have been given a platform at Truman State University or, presumably, anywhere else.

Nonetheless, despite his hostility, I regret that while I was at Truman State (where my address went off without incident, albeit with my own security team, a heavy police presence and an extremely hostile crowd, eager to show its opposition to my “Islamophobia”), I didn’t get a chance to sit down for a coffee with Bella. For it was for Bella Waddle and others like him that I actually went to Truman State, and they were the ones I would most liked to chat with, given the opportunity (and, given their taste for violence against those whom they hate, maybe a security guard or two).

The same thing goes now for Glamrou. But I’m sure he would welcome the truth about Islam’s death penalty for homosexuality as charitably as Bella Waddle did. I only hope that neither of them run into any true believers.