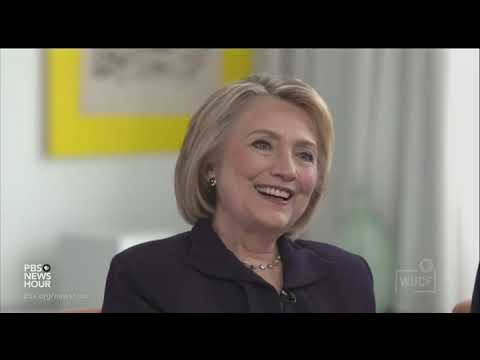 Hillary Clinton is either seriously trolling all of us, or she is very seriously considering jumping into the race for the White House.  I was just watching a three minute clip of Hillary Clinton’s appearance on PBS Newshour, and I literally could not believe what I heard her say.  In fact, I had to go back and listen to it again and again just to make sure that I did not hear her incorrectly.  In response to a question about Trump, Clinton said “maybe there does need to be a rematch – I mean obviously I can beat him again”.  If you would like to watch her say this for yourself, start watching this video at the 2:25 mark.  I don’t know why this has not exploded all over the mainstream media yet, because the only way that there could possibly be a “rematch” is if Hillary Clinton runs in 2020.  And in this PBS interview Hillary Clinton definitely looks and sounds very much like a candidate.  Could it be possible that she will be making some sort of an announcement very soon?

Over the past couple of weeks, Hillary has had a very full slate of media appearances, and when asked about the other Democratic candidates she specifically refused to endorse any of them.

Meanwhile, speculation that she could enter the race is swirling like crazy, and yet not a single time has she denied it.

In fact, even when President Trump suggested that she should enter the race on Twitter, Clinton responded only by saying: “Don’t tempt me. Do your job.”.

Don’t tempt me. Do your job.

Hillary Clinton could have ended all of this speculation completely by saying just one time that she was not going to run, but that hasn’t happened in any of these interviews.

And as I reported a few days ago Clinton’s presidential committee, “Hillary for America”, is still active and it is still raising money.

Because so much of that piece is so pertinent to what I have just discussed, I have included the entire article below…

Could it be possible that Hillary Clinton is preparing to jump into the presidential race? According to the FEC, Hillary Clinton’s presidential campaign is still active, and it actually raised $165,902.73 during the first six months of 2019. During that same period of time, the campaign spent $131,112.68, and that left her with a war chest of $650,264.43. That isn’t enough to win the Democratic nomination, but it would certainly be enough to get another run for the White House off the ground rather quickly. “Hillary For America” is the name of her official campaign committee, and during 2015 and 2016 it raised a total of $585,669,598.83, but that still wasn’t enough to beat Donald Trump. However, with impeachment mania reaching a fever pitch in Washington and with the Biden campaign fading, Hillary may sense an opening. She had a full slate of media appearances scheduled for this week, and so far she has done nothing to dispel the rumors that she may be getting into the race.

The fundraising numbers that we currently have are for the first six months of this year, and so we don’t know what happened in July, August and September yet. But those numbers will be reported later this month, and if her fundraising efforts have ramped up that will tell us a lot.

Of course just because she is raising money does not necessarily mean that she intends on running. Political candidates often keep “zombie committees” around for years, and Hillary may have some other purpose for keeping her presidential campaign committee active.

But it is interesting to note that a “Hillary 2020” campaign shirt in five different colors is available on Amazon right now. Is that just wishful thinking, or is that another clue?

What we do know is that Hillary Clinton has been seemingly everywhere in the mainstream media lately. For example, her interview with Stephen Colbert propelled the Late Show to record ratings for a Monday night…

According to Nielsen Media Research, the audience for the interview equaled the combined ratings for ABC’s “Jimmy Kimmel Live” and “The Tonight Show Starring Jimmy Fallon” on NBC.

During that interview, Stephen Colbert began discussing the impeachment inquiry, and his crowd erupted in a chant of “lock him up”…

Invoking the infamous anti-Clinton chant popularized by Trump rally crowds, Colbert asked Hillary on Monday if Trump’s Ukraine phone call, largely dismissed as a “nothing burger” but still used as the pretext to launch an impeachment inquiry, now warranted “Lock him up” chants.

“We learned about the Trump-Ukraine call, the private server – is it time to, dare I say, ‘Lock him up?’” Colbert asks the potential 2020 candidate, who cackles uncontrollably.

The audience dutifully takes their cue, and begins chanting, “Lock him up! Lock him up!”

Hillary Clinton announced last night that she will not endorse any of the Democratic candidates, fueling speculation that she may yet enter the race.

During an appearance on The Late Show with Stephen Colbert, Hillary was asked if she had endorsed anyone.

So why won’t she endorse someone?

Is it because she is planning to run herself?

On Wednesday, Clinton made an appearance on The View, and when asked about the 2016 race she stated that she “probably came across as too serious”…

Former presidential candidate Hillary Clinton stopped by The View on Wednesday along with her daughter Chelsea, and opened up about her biggest campaign regrets.

Clinton was asked by co-host Abby Huntsman, “When you look back on your campaign and what Democrats today might do differently, what goes through your mind?”

“I’m a serious person but I’m also a fun person,” Clinton responded. “I think I probably came across as too serious.”

After watching some of these interviews, it is clear that she has worked hard on her physical appearance. She appears to have lost quite a bit of weight, she has exchanged her frumpy grandma outfits for business attire, and she seems to have a lot more energy these days.

In other words, she very much looks like someone that is eager to jump back into the fray.

In between criticisms of President Donald Trump, leaders of the radical pro-abortion group called Clinton “our president” and touted her pro-abortion record. NARAL held its 50th anniversary celebration Thursday in Washington, D.C.

“Women’s rights are human rights, and for 50 years NARAL has taken on the toughest fights to protect our most fundamental freedoms. Happy anniversary. Let’s keep going,” Clinton wrote on Twitter after accepting the award.

But this is a huge problem for the Democratic establishment. As I discussed a few days ago, the elite absolutely do not want Warren to win the nomination. Originally they thought that Biden would have clear sailing to the nomination, but now he is really struggling. And with Bernie Sanders now out of commission for the foreseeable future due to health issues, Warren’s numbers are only going to get stronger.

Other than Biden, all of the other “mainstream candidates” have completely flopped, and so the Democratic establishment is becoming desperate.

Could it be possible that they will turn to Hillary Clinton as their savior?

That is what a lot of people are now speculating. In fact, during an interview with Fox Business the other day, Steve Bannon specifically warned that Clinton could enter the race…

He told Fox Business: ‘They think they have a weak field and they’re – it’s like in chess – they’re prepared to sacrifice a rook to take down a king.

‘They will throw Biden away to get to Trump and hope Elizabeth [Warren] or I even think Hillary Clinton or [Michael] Bloomberg or some centrist comes in here.’

We shall see what happens. It still seems unlikely that it will actually happen, but Hillary Clinton’s presidential campaign is active and it is raising money.

But if she is going to do something, she needs to make a move soon, because the voting begins early next year.

And wouldn’t that be wild is she actually won the nomination? A rematch between Donald Trump and Hillary Clinton would be one for the ages, although our country might be completely torn apart in the process.