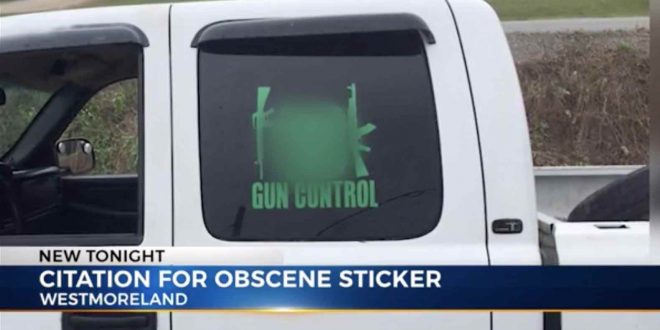 Sumner County, TN — Freedom of speech, in the land of the free, is not guaranteed. Despite the wording of the First Amendment, claiming that “Congress shall make no law…abridging the freedom of speech,” there are countless laws across the country designed to do exactly that. However, even when there aren’t archaic anti-speech laws on the books, police will all too often deprive people of their freedom — for practicing their freedom. A Tennessee man is learning this the hard way after his sticker about gun control recently got him targeted by police and extorted.

Nicholas Ennis has had a sticker on his truck for over a year showing two rifles sandwiching the letters “U” and “C,” followed by the words “Gun Control.” The rifles make the F and the K to complete the word. And, because many cops forget their oaths to the constitution, all four of those letters together landed Ennis in police custody last month.

But the police think the M-16 and the AK are clear enough to let others know that it spells out the “F word.” So what?

Last month, as Ellis drove through a Mapco gas station in Westmoreland, he was targeted by Sumner County deputies who were clearly oblivious to the First Amendment.

“He said the reason I pulled you over was because of my sticker on my truck being potentially obscene,” Ennis said.

Despite this stop being clearly unconstitutional, Ellis was issued a citation and will have to face the charges in court.

“I think my First Amendment rights have been violated because it’s not spelled out like he said on the ticket,” Ennis said. “That we should have the right to express our opinions, and the freedom of speech, and they’re trying to take it away, the constitutional right, they’re trying to take all that away from us, like America ain’t free no more,” he said.

Aside from this citation being clearly asinine, it’s well-established by the Supreme Court to be unconstitutional.

In Cohen v. California, the U.S. Supreme court upheld a citizen’s First Amendment right to wear a jacket to court that read “Fuck the Draft,” the court held:

“For, while the particular four-letter word being litigated here is perhaps more distasteful than most others of its genre, it is nevertheless often true that one man’s vulgarity is another’s lyric. Indeed, we think it is largely because governmental officials cannot make principled distinctions in this area that the Constitution leaves matters of taste and style so largely to the individual.”

Even more absurd is the fact that Tennessee state law does not outlaw such speech either. Although the law bars stickers from referencing obscene sexual situations, it does not bar stickers like the one on Ellis’ truck.

To avoid distracting other drivers and thereby reduce the likelihood of accidents arising from lack of attention or concentration, the display of obscene and patently offensive movies, bumper stickers, window signs or other markings on or in a motor vehicle that are visible to other drivers is prohibited and display of such materials shall subject the owner of the vehicle on which they are displayed, upon conviction, to a fine of not less than two dollars ($2.00) nor more than fifty dollars ($50.00). “Obscene” or “patently offensive” has the meaning specified in § 39-17-901 [which restates the First Amendment test for obscenity, and defines “patently offensive” as “that which goes substantially beyond customary limits of candor in describing or representing such matters,” apparently referring to sexual matters.

As Reason magazine points out, the word “fuck” in this context doesn’t fall within the First Amendment obscenity test, as the Court recognized in Cohen:

In fact, when we read the Tennessee Attorney General’s statement on the matter, the office agrees.

The [statute] will not reach bumper stickers that are in extremely poor taste but are not obscene [under the Supreme Court’s obscenity precedents]. For example, bumper stickers such as “s..t happens,” although unquestionably in poor taste, do not meet the constitutional or statutory standards for obscenity because they do not appeal to the purient interest. Consequently, they cannot be banned as obscene.

Nevertheless, deputies in Sumner County still claim the authority under the color of law to do as they wish and detain and ticket motorists for their completely legal and constitutionally protected freedom of speech. Rest assured that the taxpayers of Sumner County will now be held liable for the department’s incredible disregard for their oaths to the Constitution.