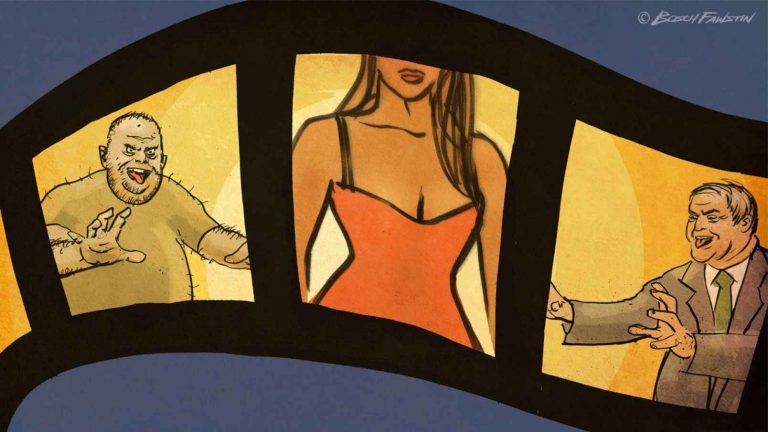 Over 80 women accused Hollywood mogul Harvey Weinstein of everything from harassment to rape. The drama of the case made the #MeToo movement go global. And you might think that there would be a movie in that. But years later, the closest we’ve come are rumors that Brad Pitt

, who has his own history with Weinstein, might adapt the story of two of the reporters involved in the coverage.

) will be making Predator

, which will be about Weinstein without actually naming Hollywood’s Voldemort. “My character won’t be named Harvey Weinstein, but it will be a horror film, with a sexual aggressor, and it will take place in the film industry,” he said.

Why not name Weinstein? And why treat a recent case as historical fiction?

“I was aware of some of the things that were happening during the Harvey Weinstein era and it is an interesting story to tell,” De Palma said.

Meanwhile, there have been not one, but two, count ‘em, two movies about the #MeToo scandal at FOX News. Showtime adapted Gabriel Sherman’s dubious book, The Loudest Voice, into a seven-episode miniseries featuring top talent. Russell Crowe had to be paid enough money to spend 6 hours in the makeup chair, not to look like Harvey Weinstein, but Roger Ailes.

Russell Crowe had been accused of being recruited to kill an investigative piece on Harvey Weinstein’s assaults back in 2004. But, please give him an Emmy now for being outraged about sexual harassment. If it involves Republicans. Weinstein had all but made Sienna Miller a star and she used to call him “Pops” while claiming that he had never propositioned her. Give Pops’ favorite daughter another Emmy.

miniseries rehashed the usual lefty culture war targets from a previous decade, the Bush administration, 9/11, and sank like a stone. Even dedicated FOX-hating proggies didn’t want to spend the bulk of their free time watching Russell Crowe

try to act his way through a wet paper bag in a neverending story about events that could be summed up in three sentences.

Reviews were poor and only some 300,000+ viewers tuned in to see the episodes when they first aired.

Was there a more interesting story that Showtime could have made a miniseries about?

Showtime is a subsidiary of CBS. And CBS had its own TV version of the Harvey Weinstein scandal, complete with Clinton connections.

CBS CEO and former Chairman Les Moonves was accused of harassing and assaulting numerous women, he allegedly even had a staff member who was there to perform sexual favors for him. A CBS board member, who was a major Hollywood producer, had said, “I don’t care if 30 more women come forward and allege this kind of stuff.”

Moonves was a good friend of the Clintons and had shepherded their projects through the pipeline.

But Moonves was not just any executive. He transformed CBS from a midwestern family network into an urban and edgy network that pushed the boundaries. The story of his rise and downfall isn’t just a #MeToo scandal, it’s an important story about the cultural changes in the industry and the country.

It’s the kind of story that The Loudest Voice claims to be telling.

But Moonves’ own Showtime gang has no interest whatsoever in telling it. Instead, the former toy of television’s worst sexual predator, spent a fortune accusing FOX News of sexual misconduct.

Lest you think that a seven-episode miniseries could exhaust the topic, Bombshell, a movie starring Nicole Kidman

, will be coming to theaters soon.

is not to be confused with the movie of the same name about Hedy Lamarr: who merely escaped Nazi Germany, became a movie star, and whose ideas helped pave the way for WiFi. That movie was considered unimportant. This one bashes Republicans.

Bombshell is being released by Lionsgate, whose former executive vice president of legal affairs accused its general counsel of assaulting her and trying to make her his slave.

At one point the powerful Lionsgate figure allegedly told her that, “he wanted me to be his slave and he wanted me on my knees to crawl to him.”

After coming forward, the former Lionsgate lawyer claimed that Lionsgate execs struck back and prevented her from finding work.

There could be a movie in that. But just not from Lionsgate. Or anyone in Hollywood.

None of that was worth a movie. The only #MeToo stories Hollywood will tell are about Republicans.

The same industry which has yet to cobble together one single lousy movie about Harvey Weinstein, a predator whose crimes became international news and whose fat face is instantly recognizable, has managed to ignore the disasters at CBS, NBC and NPR, to make two productions about FOX News.

The movies come from CBS and Lionsgate. Both of which have had their own #MeToo scandals.

Bombshell and The Loudest Voice are pictures of a corrupt industry. Just not the industry that CBS and Lionsgate had in mind. These propaganda flicks exist in negative space. The important stories are the ones that they aren’t telling. And the reasons why they aren’t telling them are the real story.

There’s an old Soviet anecdote about an American and a Russian who are arguing about freedom.

Why won’t the only major Hollywood project about Harvey Weinstein that appears to be going somewhere even use his name? It’s not because the industry still fears Harvey. Those days are done.

But the industry is full of guys like him, and many of the boys and girls who work in it are complicit.

When you look in the mirror and don’t like what you see there (a common problem in Hollywood), you project it outward. Build an effigy and burn it. And then pretend that it’s a problem that the other tribe has. Tell the story often enough and maybe you’ll even believe it. And hopefully, the public will.