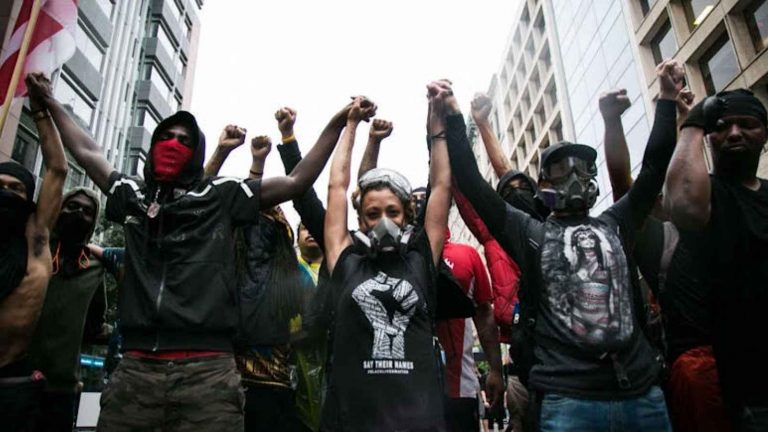 ANTIFA along with Black Lives Matter, MoveOn.org, the ACLU, and Planned Parenthood, just to name a few are all part of the massive Obama organized and managed sphere of influence, all of which are financed by George Soros.

These groups are designed to totally transform the US from a constitutional independent sovereign nation into a Nazi-inspired NWO Socialist Provence who would be governed by the United Nations.

It has been over a decade since a real protest has taken place in the United States, since Obama took office every faux protest has been orchestrated, carried out, and financed by Obama and Soros.

Today, every so-called protest is not really a protest and the participants are not protesters at all, what they are is paid political activists out to destroy any Patriotism to a traditional constitutional US.

The goal of this massive spider web of anti-American groups is to force everyone loyal to the USA into submitting to a New World Order and surrender the sovereignty of this country to become a world province under the control of the UN.

By doing this, by definition makes them a threat to the US and shows they are no different from Al Qaeda, the Muslim Brotherhood, or any other international terrorist group that wants to destroy the US.

Thus, we need to treat them as enemies and deal with them as we would with any organization or state out to destroy us.

Members of ANTIFA and BLM are mainly made up of university faculty, students, and those who are paid to riot, via ads in Craig’s List and various free press.

Aside from these who make up the foot soldiers, we also have many members of these groups in public office from the local city council, mayor, and county officials who help in orchestrating the civil unrest and violence.

The most well-known member in office was Mitch Landrieu of New Orleans, Louisiana where he made millions of dollars in payola from BLM and other Soros funded groups to remove all Confederate monuments from the city. Landrieu was so involved with BLM and he should be charged with racketeering.

Many other members of these radical anti-American groups are in the local offices across the country.

It’s easy to identify them, just follow their politically based actions in which they present proposals which are against the US as a sovereign state and their actions in trying to erase American history and heritage.

The time is long overdue for Patriots loyal to traditional America and who believe in the US as a constitutional independent nation to give ANTIFA and the rest of these Nazi core Socialist groups a taste of their own medicine. We cannot allow any more violence, intimidation, or destruction of property by these groups.

At each Patriot gathering, Trump rally, public religious assembly, we Patriots must be ready to fight and give these groups the same thing they bring to us. We must realize we are at war and the battleground is Main Street.

We should not allow ourselves to be victimized for being Loyal Americans and instead, make those who wish to destroy our nation sorry they ever had the thought in the first place.