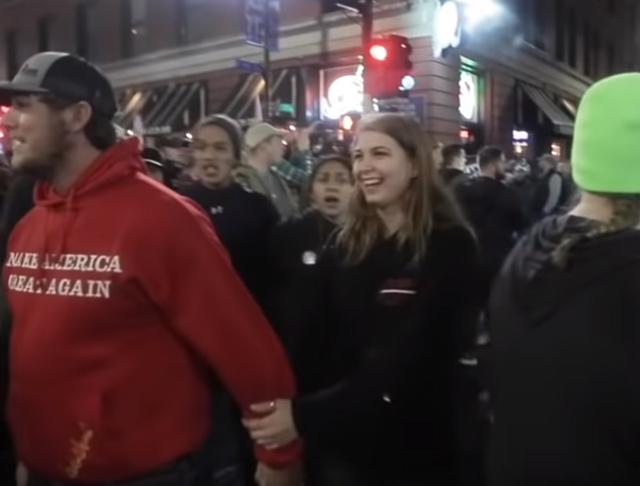 New videos have emerged showing antifa rioters sucker punching both a female and a male Trump supporter as they left President Trump’s 2020 campaign rally in Minneapolis on Thursday night.

The new footage was shared by Alpha News MN:

Innocent attendees were attacked, harassed police, vandalized, and incited violence in the city.

The same rioters appear to have been filmed participating in two unprovoked assaults: VICE News also shared video of a Trump supporter getting spit on by a rioter during an interview:

VICE had at least two cameras (possibly three) filming this incident but their video doesn’t show the assailant. Many wondered whether or not VICE intentionally spliced it out to protect their antifa allies.

Minneapolis Mayor Jacob Frey praised police for their “professionalism” and “excellence” in an email sent to senior police staff on Friday, according to the Star Tribune.

“Those who were tasked with keeping our residents and visitors safe last night did so with excellence,” Frey wrote. “The circumstances were challenging, and they rose to the occasion.”

Frey chose to ignore the assaults and instead criticized Trump in column for the Washington Post on Saturday for allegedly not paying police enough for their “protection.”