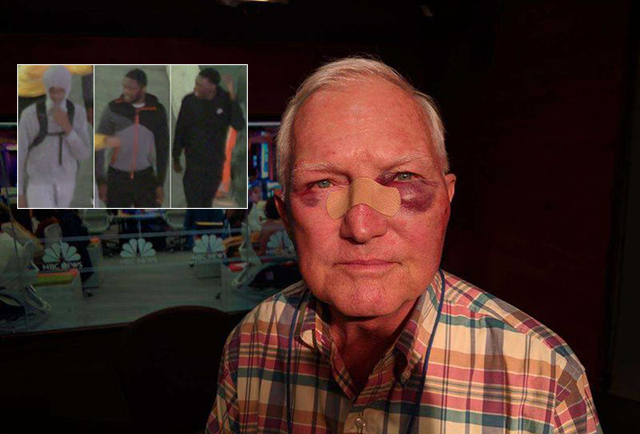 A 72-year-old NBC director was beaten and bloodied by a nine-person-strong mob in Manhattan while heading to 30 Rockefeller Center on Monday but NBC News has chosen not to even cover the story.

From NY Daily News, ” ‘They beat the crap out of me’: NBC director attacked by mob doing Halloween dance in Midtown”:

A gang of ghoulish bullies broke into a bizarre Halloween dance in front of a television director on his way to work, then pummeled the senior when he tried to walk around them, police said.

John Sullivan, 72, had just gotten off the train at Sixth Ave. near W. 43rd St. about 2:20 a.m. Monday and was heading to 30 Rockefeller Center when nine people in their early 20s suddenly blocked his path.

“They were circling around me, and they were pointing their fingers in my face. They’re dancing, and all of a sudden they’re punching me. They beat the crap out of me,” Sullivan, a technical director for Plaza Productions, an NBCUniversal affiliate, told the Daily News.

The group made “boo” noises as if they were ghosts, Sullivan recalled.

“The first guy shoved me, then they just started punching,” the New Jersey native told The News. “It went in for about 30 seconds. I didn’t go down. I fought back.”

Sullivan, who decades ago served in the Army Special Forces, tried to block their blows with his briefcase, “but they hit me pretty good,” he said.

The malevolent mob eventually ran off. When medics arrived, Sullivan declined a trip to the hospital, settling instead for an ice pack for his bruised face.

The 53-year NBC veteran, who’s worked on shows like “The Tonight Show,” “NBC Nightly News” and “Saturday Night Live” then continued on to start his 4 a.m. shift.

“They struck my head. I’ve got black eyes, I look like Zorro, like with the mask,” Sullivan said. “They didn’t rob me. I didn’t get stabbed. Luckily, I didn’t lose any teeth or break any bones.”

A search of NBC News on Wednesday evening shows they’ve chosen not to cover the story. NBC News will ignore mob beatings of their own loyal employees if the story doesn’t serve to advance their narrative.