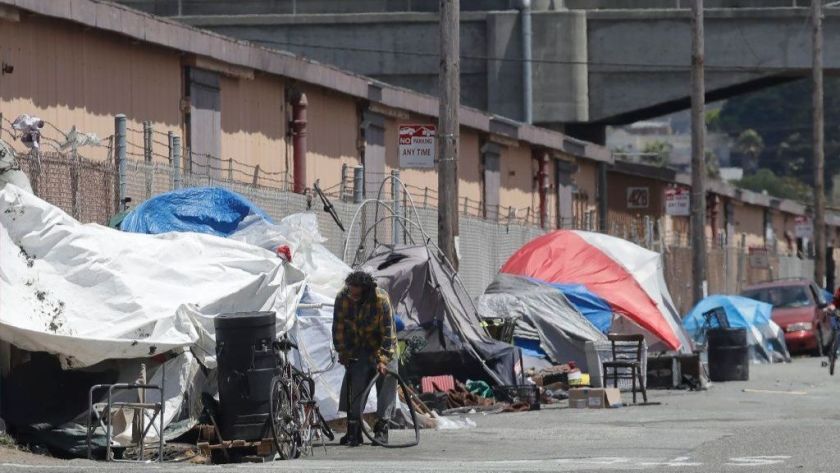 It’s one thing to read about the decline of San Francisco. It’s another to see it for yourself.

I could hardly recognize this once-captivating city of breathtaking views, delectable food, and cool jazz. Today it’s occupied by an army of homeless men and women who have turned Baghdad-by-the-bay into Bombay-by-the-bay with some of the dirtiest slums in America.

I first visited San Francisco in 1964 as a member of Barry Goldwater’s political team that wrapped up the Republican presidential nomination for the candidate who offered a conservative choice, not a liberal echo.

Then, we freely roamed the streets and hills of the city. Today, you watch your step lest you slip on human feces. Then, Goldwater Girls in their white cowboy hats and boots welcomed delegates and guests at the Cow Palace. Today, homeless men openly urinate in Union Square.

Then, we shared copies of “The Conscience of a Conservative.” Now, the homeless share their needles. Then, we opposed the legalization of marijuana. Now, Californians seem to grow more weed than oranges.

What has happened? Why is America slouching like some rough beast—not toward Bethlehem, but Gomorrah? Beyond dispute, things feel as if they are falling apart, and the common rules of a civil society no longer seem to apply.

Then, most Americans agreed that the family is the basic bloc of society. Now, according to the rising generation, the nuclear family is disappearing, gay rights take precedence over every other kind of right, Washington is accepted as primarily responsible for our welfare, and socialism is the tidal wave of the future.

What has happened? A major reason is the influence, in and out of the academy, of political philosophers such as John Rawls, who argues that everything is relative and there is no absolute right or wrong.

Rawls is the liberals’ favorite philosopher because he believes, as politics professor Jerome Foss puts it, that “the purpose of government is to rectify every injustice.” Not so the Founders, who instituted a system of checks and balances to limit the role of government.

The government that Rawls envisions, says Foss, “is empowered to enforce a theory without any institutional restraints.” So much for the Declaration of Independence and the Constitution and their reliance on certain “self-evident” truths, accumulated through 2,500 years of Western civilization from Jerusalem to Athens to Rome to London to Philadelphia.

I was a stranger in a strange land in San Francisco as I watched the people tread the sidewalks carefully on the way to work and shrug in embarrassment about the feces and the needles and the homeless tents that sprout like weeds.

I reflected on what the plain-speaking Barry Goldwater might say about the tragic decline of this once magical city, and I believe it would be something like: “Let’s cut out the crap and clean it up!” And then he would quote Milton Friedman on the importance of freedom—and, equally, the importance of what you do with that freedom.

I might have gone home depressed and saddened by what I had seen, but my next stop was Dallas. After a day among its shining skyscrapers, clean streets and parks, and optimistic can-do residents, my spirits soared. All was not lost.

The young professionals whom I met were excited about what tomorrow might bring. Dallas, not San Francisco, is the future, unless the citizens of Baghdad-by-the-bay resolve to take back their city.

Originally published in The Washington Times

Reprinted Courtesy of The Daily Signal

Lee Edwards is the distinguished fellow in conservative thought at The Heritage Foundation’s B. Kenneth Simon Center for Principles and Politics. A leading historian of American conservatism, Edwards has published 25 books, including “Just Right: A Life in Pursuit of Liberty.”