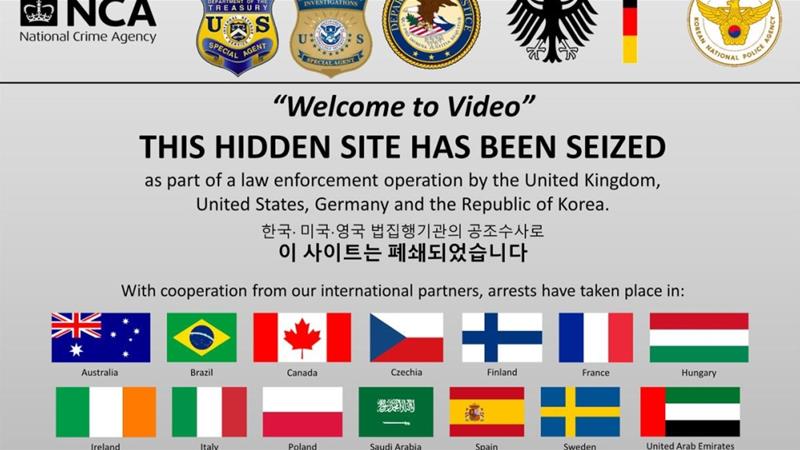 On Wednesday Trump’s Department of Justice announced a major victory in the war against child pornography.

What is believed to be the world’s largest child pornography marketplace, which was using Bitcoin for transactions, has been taken down.

According to NPR, 330 arrests have already been made.

More than 330 people have been arrested around the world in a major takedown of a massive child pornography website, which U.S. officials say is among the first to be found using cryptocurrency to carry out video sales.

“These agents and prosecutors rescued some 23 children worldwide from abusive situations” in the U.S., Spain and the U.K., said Jessie Liu, the U.S. attorney for the District of Columbia. She described this type of crime as “one of the worst forms of evil imaginable.”

“Our message for those who produce, distribute, and receive child pornography is clear: You may try to hide behind technology, but we will find you and we will arrest and prosecute you,” Liu added.

The UK’s National Crime Agency lists the total number of global arrests at 337.

Three-hundred and thirty-seven suspects have been arrested globally in multi-agency operations sparked by a National Crime Agency investigation into one of the UK’s worst ever child sex offenders.

The arrests were made in 38 countries including the UK, Ireland, America, South Korea, Germany, Spain, Saudi Arabia, the United Arab Emirates, the Czech Republic and Canada.

Welcome To Video was taken down by an international taskforce set up by the NCA and included Homeland Security Investigations and Internal Revenue Service Criminal Investigation in America, the South Korean National Police and Germany’s Federal Criminal Police.

The site – run from South Korea – contained more than 250,000 horrific videos. Users had made more than one million downloads.

The website monetised the sexual abuse of children and was one of the first to offer sickening videos for sale using the cryptocurreny bitcoin.

In the UK, 18 investigations were developed from the intelligence and seven men have already been convicted – including one jailed for 22 years for raping a five-year-old boy and appearing on Welcome To Video sexually abusing a three-year-old girl.

The NCA uncovered Welcome To Video during its investigation into the geophysicist Dr Matthew Falder. In 2017 Falder admitted 137 offences including encouraging child rape and sharing images of a newborn baby being abused. He’s serving a 25-year jail sentence.

Anyone else find it odd that The UK and USA both seem to claim to be at the forefront of this investigation and subsequent bust?

Call it productive propaganda in this case because a lot of bad people are behind bars as of this writing.

This is the world of politics.

Here’s an interesting video from Bloomberg Technology on how Bitcoin was actually beneficial to making the busts.

Here is the official release from the Department of Justice:

South Korean National and Hundreds of Others Charged Worldwide in the Takedown of the Largest Darknet Child Pornography Website, Which was Funded by Bitcoin

“Darknet sites that profit from the sexual exploitation of children are among the most vile and reprehensible forms of criminal behavior,” said Assistant Attorney General Brian A. Benczkowski of the Justice Department’s Criminal Division.  “This Administration will not allow child predators to use lawless online spaces as a shield.  Today’s announcement demonstrates that the Department of Justice remains firmly committed to working closely with our partners in South Korea and around the world to rescue child victims and bring to justice the perpetrators of these abhorrent crimes.”

“Children around the world are safer because of the actions taken by U.S. and foreign law enforcement to prosecute this case and recover funds for victims,” said U.S. Attorney Jessie K. Liu.  “We will continue to pursue such criminals on and off the darknet in the United States and abroad, to ensure they receive the punishment their terrible crimes deserve.”

“Through the sophisticated tracing of bitcoin transactions, IRS-CI special agents were able to determine the location of the Darknet server, identify the administrator of the website and ultimately track down the website server’s physical location in South Korea,” said IRS-CI Chief Don Fort.  “This largescale criminal enterprise that endangered the safety of children around the world is no more.  Regardless of the illicit scheme, and whether the proceeds are virtual or tangible, we will continue to work with our federal and international partners to track down these disgusting organizations and bring them to justice.”

“Children are our most vulnerable population, and crimes such as these are unthinkable,” said HSI Acting Executive Associate Director Alysa Erichs.  “Sadly, advances in technology have enabled child predators to hide behind the dark web and cryptocurrency to further their criminal activity.  However, today’s indictment sends a strong message to criminals that no matter how sophisticated the technology or how widespread the network, child exploitation will not be tolerated in the United States. Our entire justice system will stop at nothing to prevent these heinous crimes, safeguard our children, and bring justice to all.”

According to the indictment, on March 5, 2018, agents from the IRS-CI, HSI, National Crime Agency in the United Kingdom, and Korean National Police in South Korea arrested Son and seized the server that he used to operate a Darknet market that exclusively advertised child sexual exploitation videos available for download by members of the site.  The operation resulted in the seizure of approximately eight terabytes of child sexual exploitation videos, which is one of the largest seizures of its kind.  The images, which are currently being analyzed by the National Center for Missing and Exploited Children (NCMEC), contained over 250,000 unique videos, and 45 percent of the videos currently analyzed contain new images that have not been previously known to exist.

Welcome To Video offered these videos for sale using the cryptocurrency bitcoin.  Typically, sites of this kind give users a forum to trade in these depictions.  This Darknet website is among the first of its kind to monetize child exploitation videos using bitcoin.  In fact, the site itself boasted over one million downloads of child exploitation videos by users.  Each user received a unique bitcoin address when the user created an account on the website.  An analysis of the server revealed that the website had more than one million bitcoin addresses, signifying that the website had capacity for at least one million users.

The agencies have shared data from the seized server with law enforcement around the world to assist in identifying and prosecuting customers of the site.  This has resulted in leads sent to 38 countries and yielded arrests of 337 subjects around the world.  The operation has resulted in searches of residences and businesses of approximately 92 individuals in the United States.  Notably, the operation is responsible for the rescue of at least 23 minor victims residing in the United States, Spain and the United Kingdom, who were being actively abused by the users of the site.

Amongst the sites users charged are:

A forfeiture complaint was also unsealed today.  The complaint alleges that law enforcement was able to trace payments of bitcoin to the Darknet site by following the flow of funds on the blockchain.  The virtual currency accounts identified in the complaint were allegedly used by 24 individuals in five countries to fund the website and promote the exploitation of children.  The forfeiture complaint seeks to recover these funds and, ultimately through the restoration process, return the illicit funds to victims of the crime.

The charges in the indictment are merely allegations, and all defendants are presumed innocent until proven guilty beyond a reasonable doubt in a court of law.

The international investigations were led by the IRS-CI, HSI and the NCA.  The Korean National Police of the Republic of Korea, the National Crime Agency of the United Kingdom and the German Federal Criminal Police (the Bundeskriminalamt), provided assistance and coordinated with their parallel investigations.  The Department of Justice’s Office of International Affairs of the Criminal Division provided significant assistance.

Let the USA and UK both take primary credit for an operation that obviously involved many nations and governments.

At least the busts were made and that’s all we should really care about.

This has been happening quite a bit during Trump’s tenure, so I’m sure he deserves at least some of the credit.

I don’t think President Trump, or anyone else, can actually fully end human trafficking but he has certainly made one large dent in the problem during his first term.

I didn’t even mention the Epstein situation and how huge that was. I bet we have 50 or more articles on that at this site alone, not to mention our sister site.

Keep reading and we will keep doing our best to keep you informed.

A Guide to When You Should be an Asshole
May 27th, 2020 Brass Pills