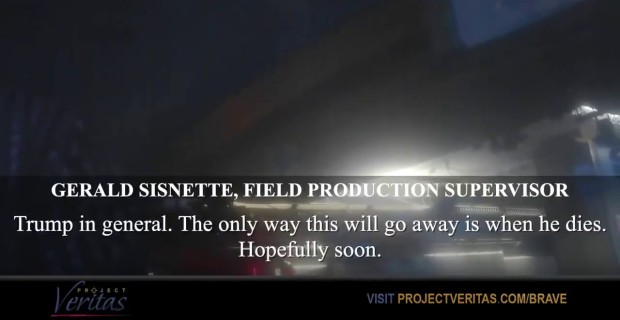 A CNN supervisor was caught on tape wishing for President Donald Trump’s death, commenting that it will happen “hopefully soon.”

The footage was released by Project Veritas as part of their ongoing exposé of the network thanked to leaked recordings from an insider.

In the clip, CNN Field Production Supervisor Gerald Cisnette is discussing CNN’s obsession with covering Trump all the time, remarking, “This is a story that’s not gonna go away.”

BREAKING: Field Production Supervisor @CNN Gerald Sisnette: “The Only Way This Will Go Away is When He (Trump) Dies. Hopefully Soon.”#ExposeCNN pic.twitter.com/HxzfP6FOTc

“The only way this will go away is when he dies. Hopefully soon,” says Cisnette while laughing.

“Remember when the entire media freaked out of a meme? Here is a CNN wishing for the death of President Trump,” commented Mike Cernovich.

O’Keefe later cited evidence that Twitter was attempting to hide the video by labeling it “sensitive material.”

UNBELIEVABLE: Twitter is saying it is “Sensitive material” to show NEW video of @CNN Production Supervisor saying “The only way This Will Go Away is When (Trump) Dies. Hopefully Soon.”

Earlier today, O’Keefe also released footage of several CNN staffers complaining that the network used to cover real news and is now nothing more than a partisan mouthpiece.