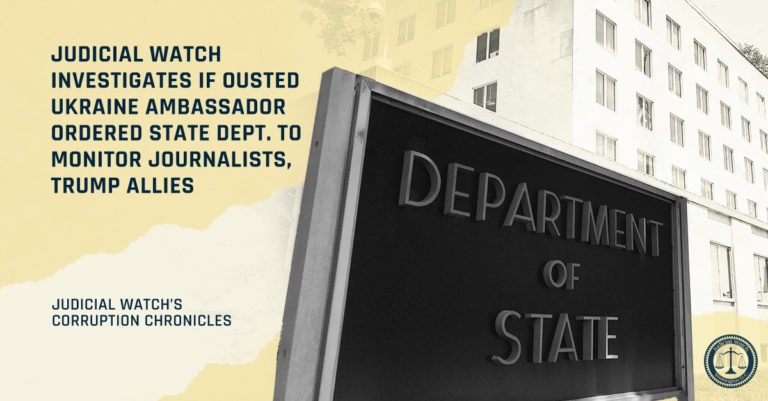 An investigation is being conducted by government watchdog Judicial Watch into whether or not allegations that Obama-appointed US Ambassador Marie Yovanovitch demanded that the State Department unlawfully monitor prominent conservative figures, journalists and persons with ties to President Donald Trump.  Of course, given how the usurper’s administration conducted itself, I would not be surprised if she both requested the monitoring and the State Department happily complied.

Yovanovitch provided “secret” testimony on Friday to the House Impeachment inquiry against President Trump, but it was leaked to the New York Times.  Obviously, it was never meant to actually be secret, but a well-orchestrated WWE event.

In any case, Judicial Watch has immediately done what it does best, file Freedom of Information Act (FOIA) requests and eventually has to enforce those by filing FOIA lawsuits.

Prior to being recalled as ambassador to Ukraine in the spring Yovanovitch reportedly created a list of individuals who were to be monitored via social media and other means.  Ukraine embassy staff made the request to the Washington D.C. headquarters office of the department’s Bureau of European and Eurasian Affairs. After several days, Yovanovitch’s staff was informed that the request was illegal and the monitoring either ceased or was concealed via the State Department Global Engagement Center, which has looser restrictions on collecting information.

“This is not an obscure rule, everyone in public diplomacy or public affairs knows they can’t make lists and monitor U.S. citizens unless there is a major national security reason,” according to a senior State Department official. If the illicit operation occurred, it seems to indicate a clear political bias against the president and his supporters. Yovanovitch, a career diplomat who has also led American embassies in Kyrgyzstan and Armenia, was appointed ambassador to Ukraine by Obama in 2016. She was recalled by the State Department in May and remains a State Department employee in Washington D.C.

In the public records request to the State Department Judicial Watch asks for any and all records regarding, concerning, or related to the monitoring of any U.S.-based journalist, reporter, or media commentator by any employee or office of the Department of State between January 1, 2019 and the present. That includes all records pertaining to the scope of the monitoring to be conducted and individuals subject to it as well as records documenting the information collected pursuant to the monitoring. The FOIA request also asks for all records of communication between any official, employee or representative of the State Department and any other individual or entity.

Among some of those people who were allegedly unlawfully targeted and monitored by the State Department in Ukraine at the request of Yovanovitch are:

No doubt there are probably more, but this is the list with which Judicial Watch will begin its investigation.