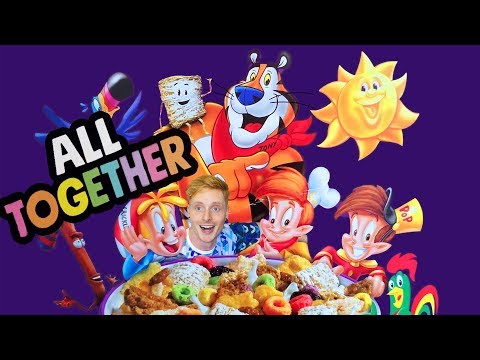 Kellogg’s is about to roll out cereal for the gay community.

They have made it through the test marketing phase and will now be rolling out a special cereal collection for the LGBTQ community.

Shockingly, the slogan idea of Froot Loops for Fruit Loops was not picked and the collection is being labeled as “All Together Cereal.”

Here is a YouTube video with a gay man that was able to get the cereal during test marketing.

Did you notice how the guy in the video put his picture on the box image between the Rice Krispies guys?

Am I even seriously having to write about a multi-billion dollar company bowing to the LGBTQ community or am I dreaming?

This is a serious story that I can’t quite get serious about, so let me turn it over to my sources.

The company’s special edition All Together Cereal is enough to make you snap, crackle and pop with Pride, bringing together many of the brand’s most popular cereals.

The company announced a $50,000 donation to LGBT+ advocacy charity GLAAD as it launched the cereal for Spirit Day on October 17.

The $19.99 special edition box, available while supplies last, contain six mini cereal boxes packaged inside one larger exclusive All Together box “to celebrate the belief that we all belong together”.

The company explained: “The box brings together six of the famous Kellogg mascots and cereals inside the same carton as a symbol of acceptance no matter how you look, where you’re from or who you love.”

I dare you to click that link above. It should open in a new window if you are using a compatible browser (I use Chrome).

Scroll and drag to highlight some text on that page and see what happens.

It should highlight/glow in the colors of the rainbow. I noticed that a few months ago when I previously cited them. Each paragraph will highlight in a different color.

Newsbusters reported on this Friday:

Have you ever eaten Froot Loops and thought, “This cereal isn’t gay enough?” Do you seek a safe space to eat your Rice Krispies? Are you concerned that your Corn Flakes aren’t sufficiently woke? Well, now Kellogg’s has the solution!

And to think, we’ve been eating straight, cisgender cereal all this time.

Timed to coincide with GLAAD’s Spirit Day on October 17, they teamed up to produce the “All Together” cereal, which Kellogg’s says is the first to offer Corn Flakes, Froot Loops, Frosted Flakes, Frosted Mini Wheats, Raisin Bran, and Rice Krispies “exclusively together.”

Unlike the mix of cereal the image on the box implies, it’s actually a Limited Edition Variety Pack with 6 individual sized boxes inside, but consumers are free to create any combination they like. Froot Loops and Raisin Brain together? Let your freak flag fly, honey!

Kellogg’s chief diversity officer (why does a cereal company need such a thing??) Priscilla Koranteng said, “At Kellogg, we are firmly committed to equality and inclusion in the workplace, marketplace and in the communities where we work and live.” As part of the Spirit Day partnership, Kellogg’s is donating $50,000 to GLAAD.

Read the rest at Newsbusters…

Is Kellogg’s being serious and wanting to actually promote LGBTQ?

Or are they taking advantage of LGBTQ by selling them a $5 box of cereal for $19.99?

Either way I feel a boycott is in order because this nonsense is ruining our culture.

Go ahead and be gay folks.

I don’t agree with that but it is your right.

But when your entire identity revolves over how you prefer to be pleased sexually, you become as obnoxious as those 70s lounge lizards, 80s playboys, 90s playas, and well I’m too old to know what people are calling them now.

If you chose to be gay, do it with dignity and stop trying to force your agenda on the rest of us.

If I EVER see a single box of this stuff at my local grocer I will never shop at that establishment again for ANY product, not just cereal.

LGBTQ has rights to their opinions and I have every right in the world to oppose what I feel is morally wrong.

No Froot Loops were eaten during the writing of this article but I’m sure some Fruit Loops got their little feelings hurt while reading it.

You weren’t given a penis to stick it in another man’s backside.

You were given that penis to be fruitful and multiply, not to be fruity and undignified.

I wonder how many boxes George Soros will buy?

Soros will probably skip the cereal and just buy half the company.

He has to be ecstatic when he reads news like this.

His master is likely pleased as well.